Seth and Rowena start off by complaining directly to Prof Rhys Meirion. So much so that he begins to wonder what's going on behind his back. While he questions his students, he bamboozles the Marine guards on the relics to allow him to take all the devices attached (he assured Corporal Polati that this was what the Commander meant). He gets Miranda to run diagnostics on all of them, but it'll take a while before they get anything like a complete picture together. 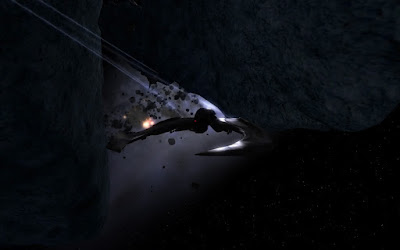 Meanwhile, Captain "Deadlock" Chitnis is tasked to interrogate Tara, the professor's suspicious protege. As soon as he tries to charm her, the anti-military/anti-establishment attitude comes out. She mouths off about his fascist tendencies, but isn't convinced by his attempt to get her to come clean - she obviously paid attention during Law 101.

After a while though, Deadlock gets a read on her. He reckons that if he can guarantee her safety (the suggestion is that she wants to be kept away from her professor and fellow students) she'll spill what she knows. She claims she was under orders from Rhys - well, not exactly orders. He makes suggestions and drops hints as to what he wants, but uses their actions afterwards to judge them as being compatible with his viewpoints.

Rhys puts his students to work analyzing the data from the relics' peripherals. He wants to keep them busy. He gives them a pep talk about making sure that they don't get caught in an 'us vs. them' dynamic with the military - they have to prove their worth.

Deadlock goes to brief Command Behari, he suggests that they keep Tara on board and under supervision. Her actions smack of recklessness and not sabotage. He's going to put the two of them in a room together and see what happens. Meanwhile they agree to put a rota in place to have two Marines on guard on the relic ship at all times, just in case.

Deadlock goes to visit Rhys, but the professor stonewalls the CAG - of course there's no link between the relics and the power outage throughout the fleet! He does ask about Tara - when he hears that she's safe but scared, he wonders if he can meet with her. Rhys intends to find out what's going on - without tipping his hand that he doesn't actually know what Tara was up to.

Tara is looking a little bit more disheveled when they arrive to speak with her. She complains about her conditions, but completely wigs out when Rhys sits down at the interview table. She flat-out says she doesn't want him there and doesn't trust him. She won't talk with him in the room. When Deadlock asks the professor to leave, she calms down a bit; but gives out to him as well - how could he have betrayed her trust by bringing him here?

(Of course Rhys is looking on from behind the one-way mirror outside).

He'll manipulate everything against her now - she tells him about a previous student of his, a girl called Athina. When she refused to play his games and brought charges against him for sexual harassment, he got his collegiate allies to expel and blackball her. While Deadlock assures her that Rhys no longer has that kind of power, he's not sure if he's entirely convinced of that.

When Deadlock exits, he's greeted by a WTF look on Rhys' face! They talk about getting Rhys back on board to take a look at the relics; if Rhys were to pick a handful of students, how many would that be? And who?
Rhys quickly identifies Miranda, Lukas, Iona, Beth and James as the best candidates for that job. He can't vouch for Tara any more, due to her 'lack of judgement'. Deadlock is fascinated by these relics and really needs for them to be useful. With military supervision and technical participation in the research, Professor Meirion's team will be able to get involved again. He also wants Tara to be involved - they need eyes and ears inside the professor's group.

It takes some convincing but he manages to sway Behari to allow it - he will debrief Tara regularly and compare her story with the regular updates from the rest of the technical group. Of course, it's explicitly stated that Deadlock is personally responsible for this project - if anything goes wrong, especially with either Tara's or Rhys' involvement, it'll be his blotter with red ink on it.

Deadlock heads down to the flight deck - the Chief, Dylan, will find a berth for Tara in return for that nice bottle of liquor Deadlock has been saving.

Back at the lab, Miranda reports that all that data has come through. It looks like at the end of running usual diagnostics on each of the relics Tara apparently entered an unknown sequence of commands into the C3 unit.

At the subsequent meeting with his entire group, Rhys tries to get a read on who could be spreading discontent. He identifies Lukas as the beta in the group, he's responsible for a lot of alternative ideas. He gets good feedback from the group that they need to provide actual results to the military, and allay their paranoid. Lukas will heqad up the data team, while Iona will lead the team dealing directly with the relics. They'll work on small controlled outcomes and if there's any confusion on short or long-term goals, they're to come directly to him for clarification.

Deadlock and Tara arrive at the meeting, and Rhys gets an inkling that his real enemy in this has just made themselves known.

Helene 'Boxcar' Sulla has dropped out of full-stealth mode and has gone to pick up the picket drones. They'll be useful and if she doesn't get them now they'll go too far to be detected, never mind caught up with again. She heads back to Atropos Station, but finds it completely abandoned, and no sign of damage. She docks and roots through the place, but it looks like it was picked clean (apart from her secret stashes). After heading back out she catches the trail of a Battlestar and does a standard landing approach after getting picked up by the patrolling Vipers. They're cagey, but the Valkyrie lets her land once she runs through her ID. She runs the landing strictly by the book (does she know any other way!) albeit a 40-year old book only the old-timers aboard have even read.

Amazingly enough, Burns (the XO) gives her an unqualified complement on her flying (a first time for everything!). Deadlock and a contingent of Marines receive her in the starboard landing pod and get the introductions out of the way.

After getting the tour, and something like an appraisal of each others abilities, Deadlock says he can assign her a berth as one of his Raptor pilots - Boxcar pushes for rank as a full-grade Lieutenant, but Deadlock has her number, she'll start off as Ensign like everyone else. She can earn the extra pips on her collar. He does ask her for a favour - maybe she'll help him keep an eye on Professor Meirion? Helene grins - sure, why not?

They're quickly jolted out of their cosy arrangements by an alert - CIC has just picked up a distress call from a colonial ship near the edge of the asteroid belt identifying itself as Diomedes. They're scrambling to take a look, but by the time they've gotten a scan of it, a dozen plus Cylon raiders have jumped in to attack the massive civilian ship.

Boxcar's Raptor takes a high angle in on the ship and she helps coordinate as Deadlock leads 'A' Squadron in right up the Cylons' tailpipes - they're so fixated on taking out the sitting duck in front of them they just didn't notice the Vipers until it was too late.

Boxcar has fed the Diomedes the Valkyrie's current coordinates and they jump to the Battlestar's protective cordon before any of the Cylons can complete their approach.

Deadlock's Vipers take out about half of them on the first attack run, but as things get hairy and a dogfight breaks out, a few of the Vipers get hit - Muzzle loses control and slams into a Cylon, both craft explode in a fireball.

The Diomedes checks out - it's an agricultural / hydroponics ship, with just over 600 people aboard.

They plot the course to Zeus, a gas giant at the edge of the system, a secondary rendezvous point for the Fleet after Ragnor Anchorage - there's also likely to be some small mining stations and vessels in orbit.

Jumping in they find absolutely no signal traffic in system; Behari sends out several scouting Raptors with Vipers covering them. Scattered throughout the orbit, they detect the remains of several large gas refinery vessels, and on the larger satellites around Zeus, the ruins of mining stations.

Boxcar goes deeper into take a look at one of them, switching on her Raptor's stealth systems;
As she passed by an abandoned station, she notices two Cylon Raider detach from the surface of the rock and head towards her 'escorting' Vipers. She flashes her lights directly at Deadlock's Viper, giving him a few seconds warning so that they can smoke the two Cylon craft.

Boxcar's return following hot on the heels of the Raiders almost causes an accidental blue-on-blue incident (Deadlock reminds himself to caution her about that later!). She does come back with some positive news. She's made contact with Horatio Halphen, the leader of a small station (some 20 gnarled miners, whose station was missed by the Cylon attack).

They're transferring the movable equipment and ore to the Sinqa when a Cylon Basestar jumps in to disgorge a hundred Raiders towards the Valkyrie. Throughout the orbit, each satellite detaches a handful of Cylon Raiders - they're caught between two fires...

Next Session: Zeus Engagement
Played by Donogh on Saturday, June 27, 2015