Brother's anxious as they pull up outside the Circus. Kim the Savvyhead gets out of her van and attracts Dusk the Skinner's attention. She offers the Skinner sanctuary back in Lopez, but Dusk refuses, telling her that she lives here (pointing back at Watering Hole). Even with the carnage going on? So Kim tells her to climb in and she'll give her a lift back. Kim motions at Brother to drive back to Lopez without her.

Then, they hear that strange calliope music again, and the sound tugs at Dusk's brain. She's calmed and soothed by it and instinctively follows it back inside. Kim is unaffected by it, but follows anyway. They heads inside the big tent, and it fills up with all manner of people walking in from Watering Hole. 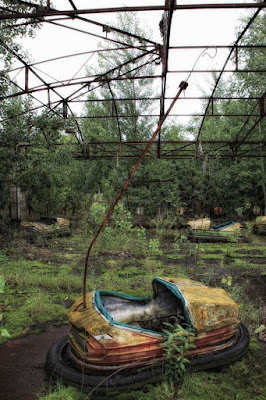 Inside the air is different, sweeter and reminds Dusk of the drug Found the Hocus uses in her cult rituals. Things kick off with clowns and a very energetic band and then the lights dim and Mimi makes his grand entrance. He's pretty good at this show-man stuff, and uses the band and lights to great effect. Kim's spider senses go off, but she doesn't see any tricks, just flat-out weirdness.

Doctor Pain arrives in the ring, and he drives nails into himself - with the terrible damage being inflicted to his body, they notice ghosts beginning to appear; no crocodiles or wolves, but other than that, just the same as they did during Found's augury the other day.

The acts get stranger, but as soon as the crowd starts getting uncomfortable Mimi comes out to settle them down. Throughout he monologues, talking about the sin of the world and how the apocalypse wiped it out, and they bring light to the darkness and redemption to the sinful.


Dusk is starting to feel the effects of the drugged air, but when Sister Sin walks into the ring Kim goes quiet and sits down. It's her lost-lost brother. Dusk wonders why she's suddenly this interested, and realises that they're no sense of nostalgia or love, but just intense interest in what has happened to him since she left him mutilated in the dust those years ago.

But now trying to get something out of the Savvyhead, the drugs in the air start to get to Dusk and she just lies down on a bench (her head in a ghost's lap). Then Mimi comes out to introduce one last act, he declares that he's kept the best for last! He riles up the crowd with some hate for Scum and promises a bloody spectacle...

Dusk gets to her feet and stands up on her bench. She grabs Mimi's attention and tells him that's not going to happen. She's thinking quickly - who's the baddest ass in the Valley - that'd be Navarre, the road warrior who terrorises the highway between Lopez and Logger.
She yells out
-Navarre is coming, and you all know what he's going to think of this! He's going to tear through this place like there's no tomorrow. So you all best be gone.
She slowly steps down the benches and into the ring.
Mimi's not having it, and calls in the goon squad - a bunch of savage looking clowns who take care of security for him.

Dusk address the crowd now, telling them they'd better leave, and they all know Navarre's reputation - there are a million stories about him, and in Lopez he's treated like a fairy tale villain. Mimi walks past her to shut that down, and when Dusk spots two nasty looking clowns coming at her, she swiftly draws a knife out of her inside pocket and puts it across Mimi's throat.

She tells him, and by extension his bodyguards, that they're going to walk out of here together, and he'd better keep his people onside. Kim draws her phaser and covers the two clowns and they don't quite know what to do. They all back away towards the crew entrance, Kim keeping her eyes and her gun on the clowns and Dusk picking her way through the detritus, keeping her blade tight to Mimi skin.


As they get outside the tent, Kim and Dusk exchange glances and the Skinner switches to grabbing Mimi's collar and they run around the tent and towards the circus perimeter where they can get to Kim's van. They're nearly there when Mimi stumbles, and hurts himself when he hits the ground. Dusk vaults over his falling body, but Kim trips and loses her phaser. Dusk makes to continue running for the gap in the perimeter, but she notices that Kim is still on the ground going for her phaser. The two clowns are running towards them now, raising their weapons.

Dusk turns around to help Kim out. She jumps back, launching herself at Mimi's prostrate body, reversing the knife in her hand and slamming it into his back. The two clowns stop in their tracks as Dusk gets to her feet, wrenches the blade out, dripping in bright blood.
-Drop your weapons and you can take care of him
They ask her to leave Mimi alone and one of them runs to get the doc.
Kim and Dusk back away, but the clown loses his nerve and picks up his gun yelling out to the entire circus
-Kill those sons o' bitches!

They run, but with clowns closing in, they choose to run into the cornfields and the dark of the night rather than go for the van.

Kim and Dusk run until they reach the road. Kim catches her breath for a moment and starts running again, but Dusk just stands there in the middle of the road. She hears something in the distance. Kim tries to get her attention to move, but Dusk shakes her head, and then a giant set of headlamps appears down the road.

Navarre's giant V8 buggy stops right in front of Dusk, the two double-rows of glaring headlamps pretty much blinding her. The stern hulking man climbs out of his seat and walks up to the Skinner. He's menacing, but he's not menacing her. Navarre's crocodilian skin is apparent, he used to try to hide it, and even got Dusk to tattoo over the early signs, but now he revels in the changes to his body.

He glances at the bloody knife still held tightly in Dusk's right hand, even the edge of her palm is gory and dripping blood to the road. Navarre wonders why the hell he's here, and isn't impressed when Dusk tells him that the Mimi's planning on killing a bunch of Scum.
Not only does he bristle at her use of 'scum' but he wonders what that is to him. She shakes her head, she thought he might be interested that people were just picking up people with crocodile skin for sport killings.

Three armed clowns come out onto the road, and they're a little bit confused at the spectacle in front of them. Kim edges around from the front of the car she's behind and points her phaser at one of them. She's dialled up everything on the phaser to 11 and lets rip!
A blast of energy burns the clown to a crisp - shocking everyone in the vicinity. One turns tail and runs and the other opens up with his SMG, peppering the engine block in front of Kim. Navarre blasts him with his shotgun.

Navarre's not entirely happy with Dusk, but he motions behind him and five more warriors jump out of the flat-bed at the back of the truck and they move into the cornfields to hunt clowns. Navarre looks pointedly at Kim hiding behind her ruined car on the side of the highway; Dusk explains that she's with her and he nods and follows the others into cornfields. 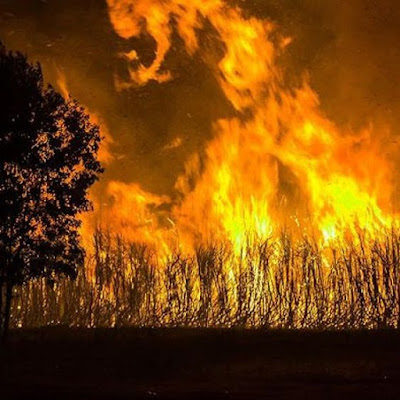 Dusk walks over to Kim and hunkers down alongside her. Gunfire and screams erupt from the cornfields; in the distance they can see the circus lights slowly turn orange. Kim is worried, and goes back through the fields to recover her van. Dusk sticks around, keeping an eye out for Navarre.

Slowly, by ones and twos, people start coming out of the cornfields. They're shell-shocked and seem to be just straining to get away as far as they can. Dusk attracts their attention from the rooftop of a car and yells at them to go down the road and head to TumTum's.

Mostly they're the audience from Watering Hole and beyond that attended the circus, but she spots a one from the circus itself, Goddamit! the bus driver. He's really freaked out and tells her that they're killing everyone back in the circus. She wonders if he's a clown, and when he shakes his head confusedly, she smiles and points him towards TumTum's.

The gunfire dies down eventually, but there's no sign of Navarre. A couple of heads pop out of the corn, and Dusk hides behind the car. They're not Navarre's people and they're not dressed as clowns. They go back in after a moment, and after a while Dusk climbs into Navarre's truck and drives back to TumTum's herself.

Kim's van is parked out front, and the Savvyhead is looking anxiously at her phaser recharging off the engine.

The crowd has gathered around the bar, but the shutters are still down and the door is locked. But when Dusk pulls up she spots Dremmer peaking out. She wades through the crowd to the front door and Dremmer opens up for her (just a crack). He's not going to let her in, but Dusk tells her he'd better or there'll be a riot - and the bar's bound to do good business tonight.

He shuts up and quickly talks to TumTum, and they open up. Dremmer takes position at the door - he's not checking guns like he usually does, but is checking people and refuses some who give him the wrong kind of feeling tonight.

Dusk goes up to the bar, and asks for a bottle of whiskey - TumTum raises an eyebrow and tells her he doesn't want her getting Dremmer drunk tonight. So she asks for a nearly empty bottle, and he grabs one for her. She tells him that they should put together a posse to run the circus out of town - he's not happy with that - times are changing.

They hear a shot from outside, and when Dusk heads outside, he's gunned down one tough guy and is staring down his two friends. Dremmer's too busy to pay her much heed when she offers him a quick drink, and she tells him she'll be back and heads over to Kim to share most of the whiskey with her instead.

They hear the sound of engines coming from the circus and slowly the noise dies out as it drives away. They're going to go take a look...


Next Session: Detritus
Played by Donogh on Thursday, November 24, 2016