Fox the Operator drove away from the Circus that night, with an increasingly ill Brother riding shotgun. She pulls in on the side of the road, far from the craziness but still within sight of Watering Hole to nurse him back to his normal self.

Wire the Chopper drives back into the hold with her gang tired from the road. Tempers are frayed a little, and Tandem and Bull go at each other at Chubby's. Wire breaks up the fight, which seemed to be cover for Red's leadership challenge. A couple of them don't walk away from that mistake. Finally she can't put up with the ruckus, and heaves in behind TumTum's people to help tamp down the rioting.

The following day, Fox moonlights - it feels strange to be doing so without Brother or Kim in train, but she juggles a dozen interested parties to broker a few deals, and then in her spare hours does some surveillance in the crowded bar to report movers and shakers to GoGo, the likely heirs of BlackJack's old hacienda.

Things don't go so well when she tries to stay on good terms with Dusk though. She orders a bottle of the good whiskey to go on Dusk's tab and when Putrid (the bar keep when TumTum's away) breaks the news to her, Dusk is not impressed. There's a small stand-off re payment between the two (Putrid & Dremmer backing up Dusk) with Kim ready to stand in with Fox. But they settle it and the open bottle goes back behind the bar. 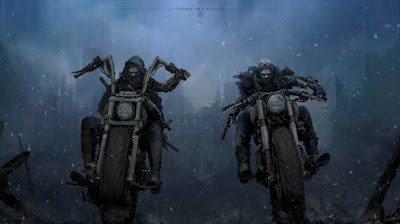 Dusk the Skinner heads out to talk to Wire, about putting together a strike on Doberman and the Circus before they can reach and wreak havoc on Purity. Wire is definitely up for that, and picks out her fastest cross-country biker, and old codger called Gaptooth, to go out (with a CB radio) to warn Purity not to let the Circus in. Maybe he can call back with some useful information when he spots them as well.

Kim puts out a strong message far and wide into the Psychic Maelstrom along the same lines: "Don't let the Circus in". Then she goes to speak with Johnson about the delivery of the new phaser. They hash out a deal, which they both (just about) can be comfortable with.
He'll provide her with a workshop on his hacienda, with security, power and a few test subjects (who are to pull the trigger during tests, and not be particularly worth crying over if everything goes badly).
She'll provide him with a fully functioning phaser, demonstrate it and charge a flat one jingle for it, and then one extra for each successful killing shot.

When Dremmer finds out what they're up to, it's obvious to Dusk that he wants to go. But when she asks him, he hums and haws - with TumTum gone out on business he feels responsible. She tells him to get Putrid's boyfriend (Wanger) on the door while he's gone, but he digs in. When she offers to hire him as her bodyguard should TumTum throw a hissy fit when they return instead of thanking them for hunting down the Circus, he gets right on board. He grins like a little boy when she tells him that they'll be taking Navarre's truck out.

He brings out the big gun (a 50cal) and sets it up on the pintel mount on Navarre's truck. This is going to be awesome!

The rag-tag posse sets off. There's an unspoken but very real rivalry between Skeleton Jack's and Wire's gangs, and the Skeleton Crew are more aggressive in their pace-setting. As they get further towards the edge of the Valley, the rusted vehicles piled up on the highway become more numerous and when they get to the foothills near Purity, the potholes and damage to the road make it an especially bone-jarring journey - not that Dusk notices in the cab of the truck.

They slow down as the road winds up into the mountains when one of the lead Skeletons falls off the bike. A few moments later, when everyone realises that it was a sniper shot and not an accident, the other hidden snipers open fire. A few more go down before Wire catches up and then sends some of her crew off around the flanks to flush out the snipers. They spot a machine gun set up in a wicked ambush position, and it's about to wreak havoc; when Dusk rounds the corner and Dremmer opens up with the 50cal. The ambushers die horribly in the rout, and the bikers seem disappointed that they were just bandits and not from the Circus.


After a while longer, they can see Purity. At a v-shaped gap in the mountain. A deep river runs through the gorge, and there's a spectacular waterfall cascading down the face of the mountain. A road runs alongside the river, and there's the tail-end of the Circus' caravan.

Kim talks to Gaptooth, convincing him that she's on the level - he's inside Purity and she gets him to try to convince them to help destroy the Circus. He's not too sure as they seem pretty stand-offish.
Dremmer is up top with the 50cal and Dusk yells at him to "light them up!". As he opens fire, the bikers work their way up the side of the road and pick off the dismayed Circus crew.

Wire comes across someone who must be Doberman - he yells his defiance at her, but she just blows his head off without any further ado. And that's the end of the Circus.