The Orphans find that they need to find new supplies of spirits and ancient relics to sate the Wicked Mother's hunger. They hatch a plan to smuggle in spirit bottles and artifacts via Leviathan Hunters stopping off at Duskwall.

With Grace's help, the identify the Spitfire, a short-haul hunter that specialises in the sort of smaller leviathans which frequent the sea in between Akoros and Iruvia. Bricks is their contact aboard and he lets them know that Captain Sevoy is heading to Sunfall in the next few days for provisioning before a few longer hunts in the bay down towards the Dagger Isles.

The requisite bribes are made and Quess the Spider, Ghostblade the Whisper and Fancy Frank the Hound get a terrible berth for the week-long voyage down to Sunfall. When they get down there Bricks warns them that they have a couple of weeks before the Spitfire will be back to pick them up and head back to Duskwall. 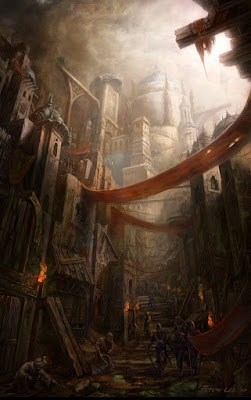 This city is brighter and warmer than they've experienced before (at least for the two Akorosi). Instead of the dull wind and rain of Duskwall, Sunfall's every surface gives off heat like the sun has just gone down.

Strangford has given them a letter as an introduction to Thena, a local court functionary. She meets them in a tea house overlooking the bay, not a docks location but further up the hill in the city in a nicer part of town. They sit down opposite the elegant robed woman, and she waves over someone to bring spiced tea and cinnamon rolls.

After reading the letter from Strangford (Quess had checked it before handing it over, can't be too careful!) she raises an eyebrow to look for their assent before burning it in the brazier next to the table - wouldn't do to allow such a compromising piece of evidence fall into the wrong hands.
Discussing how many full spirit bottles she can provide them with a month is difficult. They're pushing for 4 or 5, but she tells them that's the kind of level one of the demonic movers and shakers in Sunfall would be capable of; and she's not willing to attract the kind of attention that would entail. More like 1 or 2 is much more likely.

They'll meet up again when they're ready to leave the city.

Ghostblade wanders the curio shops and cult temples, looking out for something interesting to start their fencing of stolen artifacts across the seas. The first really interesting thing she sees is a sacrificial dagger used by a small cult. They're sacrificing a goat into a small fountain outside their temple. From distance it looks like ancient work, and its material is something she hasn't seen before. But the heat is going to be too big so she keeps looking.

Then she spots something very interesting. A blood hookah in a well-hidden but surprisingly large antique shop. Unlike common pipes, this one is ancient and designed to use leviathan blood instead of water; which reputedly gives remarkable effects to the smoke. The shop is run by an old man, Zemira, who must be in his 70s. A young scruffy teenager called Wicker helps out. Ghostblade buys something small and at various points over the next few days the others scope out the place.


So, they buy a small supply of strong weed, strong enough to knock out just about anyone who smokes it. Quess walks in and starts talking to Zemira about the hookah, he tells her that no one's been interested in that kind of thing in years - no one's even asked about it in a dozen. She wonders if maybe she could try it out before buying it, and the old man hums and haws, but agrees. She fills it with her weed and he pulls out a flask of blood. They exchange a conspiratorial smile.

When Quess sits down, she wonders if he'll join her; he shakes his head, but is convinced by her assertion that custom and tradition insist no one smokes alone. Once he's sat down he calls over Wicker, and even a random customer (actually it's Ghostblade!). They all sit down and after a while they conk out, and have strange dreams.

In walks Fancy Frank, and quickly disassembles the hookah and stows it into a carrying bag and sling it over his shoulder. He can't resist putting the old man and Quess into a compromising position, and he leaves...

With the door closing behind him, he finds himself looking at the barrel of a pistol pointed straight at his gut - it's Casta, his old nemesis from the Skovlan War. Casta smiles at him; he reaches behind Fancy Frank's back and pulls out the pair of fine dueling pistols and tucks it into his waistband. Then he pulls out a long blade from the Hound's inside jacket pocket - I guess when you work together for years you know where everything is kept (though Fancy Frank has got a single blade left on him).

-Come on Haig, let's walk
-What's going on?
-Collecting bounty on you; you've made a bit of noise recently, so I'm turning you in

Earlier, Quess had hired a small group of street urchins to keep an eye on things, and they intervene to help Fancy Frank; nothing crazy, one bumps Casta and another goes for his purse. But Casta's having none of it, he smacks one and twirls away.
The Hound jumps at this opportunity, pulling the blade out of his left boot but that extra moment to bend over gives Casta the time to draw a bead on him and he shoots. The bullet thumps into armour, but Fancy Frank is still badly wounded, and he stabs Casta in the armpit, turning and running as soon as the bounty hunter hits the cobbled street.

A crowd gathers and everyone there can relate what's happened. Fancy Frank is pegged as the thief, and inside when they recover Quess and Ghostblade and happy to have a great alibi!

The urchins see Fancy Frank back to their temporary lair, and the others see him to a surgeon.

The day before they leave on the Spitfire, they meet up with Thena again. The exchange goes smoothly enough, two full spirit bottles are presented, they are intricately cast glass - artisan work. They asks Thena if she'll consider joining the Cult, and initially she laughs it off saying that they must be weak, having fled from Iruvia; but then there's an awkward attraction between her and Quess and the Spider leans into it.

She tells Thena the secret of the Cult; they only 'ran away' from Iruvia to Duskwall to grow and expand. She gives a full rundown of the Cult's assets, and even tells of the destruction of the Hand of Sorrow at their hands. Thena is impressed and joins to them there and then. She'll have to travel to Duskwall for the full induction, but for now she is Bound in Darkness with them (so they can communicate easily with her) and will ensure their supply is secure.


The return home is swift and smooth, but when they reach Duskwall the news is bad. The Billhooks have made a show of force, and the inevitable refusal to cede territory has been met with a declaration of war!