Marcus' hard work over the previous few days pays immediate dividends as he gets the relics inside Zeus' satellites running to interfere with Cylons in overlapping range of them. 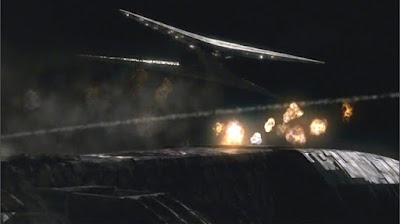 Commander Sofia Behari gets onto Marcus - she wants his assessment of how vulnerable those Cylons will be to his new secret weapon. Those raiders floating around Athena are currently most vulnerable, but they'd better be wary of a second basestar jumping in between Minos and Athena; Zeus. Marcus does alert Behari to the possibility of using the relics to create a field which would prevent any jump inside the overlapping relics, but that would require a mondo power source.
that's their best and most obvious escape route. They won't be able to jump out this close to

The Valkyrie and the rest of the fleet close in with Persephone; with another Viper group launching and defending in a close cordon.

Meanwhile Boxcar escorts the Sinqa back to the fleet and then acts as C3i, going quiet to maintain surveillance on the Cylons. Deadlock briefs the squadrons and they hold their positions for now.

Raiders #2 come in fast with Squadron B intercepting them. 20 or 24 go dead in space, as blue arclight shoots out of the artefacts. Marcus is happy with himself, but Behari is concerned as the lights go dim on the Valkyrie (and strangely enough, they go blue as well). The pilots are ecstatic as they mop up the helpless Cylon raiders. 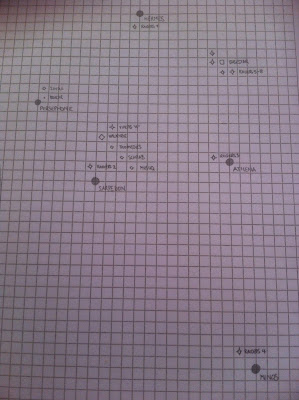 Marcus gets back onto Behari. He reckons he's got a 40% chance of interfering directly with a Basestar, but it'll take a lot of power.

Squadron A, with Deadlock leading, head towards Hermes. Behari provides some covering fire for them, but the power requirements of long-range fire cause the FTL computer to go down, losing their jump coordinates!

Boxcar is in a position to scout, still identifying the same route out; with raiders on the breakthrough route not dog-fighting and hanging back.

Squadron A pulls back to protect the fleet , but in the fight against massed raiders, Hercules, Easy and Snake Eyes are all killed and the Cylons break through the cordon. The Valkyrie opens up on the closing raiders and puts up a wall of fire which forces the Cylons to break, giving A Squadron a chance to catch them, all-but wiping out 2 groups of raiders.

After mopping up, Deadlock thinks about heading back to the barn, it's time to rearm the Vipers, and with the Valkyrie laying waste around nearby, they might just have the time and space to do so, and he uses his CAG privileges with the crew chief to get a new(ish) Viper, as the rest of his squadrons sit in hot seats to get replenished.

Boxcar is looking for a weapons load, anything to turn the tide. Behari is thinking about the few nukes she still has locked away, and quickly gets one launched at the Basestar. Boxcar has a tight-beam on it, and with no guidance running from the Valkyrie, the Cylons shouldn't be able to intercept. Boxcar takes it under her wing, and sets up guidance and proximity counters so that it'll detonate on top of the Basestar and when she's made her getaway.

Deadlock launches to fly interference, getting rid of any raiders that look hungry. The nuke goes off behind them and the Basestar is destroyed. The Cylons cut their losses and all nearby raiders bug out.

But a new Basestar jumps in.
The race is on to get the FTL back online, and get all the Vipers/Raptors back aboard before they get entangled again.

They jump with the civilian fleet to a system outside of Colonial space. A known Tylium source.

Next Session: Final Stop
Played by Donogh on Saturday, July 18, 2015