Glen Holtzer is the captain of the Scarab, a beat-up salvage and refinery ship. Intense eyes stare out of a burnt and gaunt face. Used to be he ran the ship for a conglomerate, but he was always first amongst equals and no bean counter is going to take his ship off him now.
He's seen every kind of trouble this hard life can throw at a you out in space. His crew have an intense respect for him, and he's definitely the best man for the job. Who knows if there's anyone better to bring them through the war or a way home.
He's a bit of a safety nut - his scars are living proof of the cost of not doing things the right way - no amount of extra money or time are too much to pay to take care of his crew. 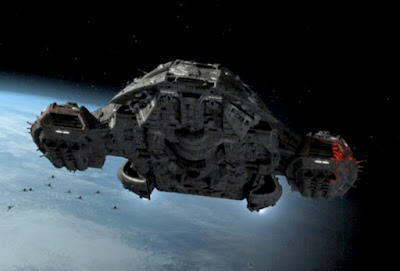 Getting close to Atropos, the Scarab's command crew don't notice a hulking ship following quietly behind them . The Battlestar Valkyrie is cruising as quiet as can be, at battle stations, but without any Vipers launched.

The Valkyrie's CAG, Dre Chitnis (callsign: Deadlock) sits inside his Viper. The Captain's hollow face and calculating eyes are accentuated by the low red lighting of the launch tube. Alongside him in the launch tubes are:


Fender - who was in the academy with Deadlock, and despite the better exam results, always got promoted behind Deadlock. Always giving him grief.
Lunchbox - solid and reliable, got Deadlock's back and always comes through in a pinch.
Beeper - can fly but panics when stressed out, doesn't really deserve her wings, but needs must.
In the Raptors ready to go are:
Stump - the veteran ECO aboard the Valkyrie, has been aboard the longest.
Dropout - always says he's going to drop out because others aren't doing things by the book.

Sitting and waiting with no room to stretch, Dre's thoughts turn to Freeze. Just a few months ago, in this very region of the asteroid belt, he sent Freeze into certain death. Tracking down pirates isn't usually so dangerous but this time it was different - he still has no idea why they were so tough, but everyone knew his orders to Freeze were a death sentence. Cash and Tango, Freeze's mates, still haven't forgiven him.

Dre wonders how he would react - he's never refused a direct order, never - everyone knows he'll always follow through. The rule-book might get bruised the odd time, but he'll always do his duty.

Getting closer and closer to Atropos now, the Station looks abandoned. There are no landing beacons or lights turned on and they're not responding to any radio communications. Holtzer orders the Scarab to make anchor onto the asteroid the old-fashioned way. They'll get into their suits and knock on the door with the biggest Gods-damned spanner they can lay their hands on.

Smith and Fox get a crew together and armed with whatever's handy, just in case - they let the Scarab's landing party in and there's an emotional greeting between the two groups. But all-too brief as Professor Meirion arrives in the hangar and begins negotiating with Holtzer on the price for accomodating his 227 crew inside the station. Holtzer suggests maybe he'll start selling tickets aboard the Scarab for a one-way trip away from this floating death-trap.

The heated discussions are interrupted as Marcus pipes down saying that the can detect a ship coming in. He can't tell if it's Colonial or Cylon, but it's definitely as big as the Basestar they spotted the other day. The Valkyrie opens up a channel with the Atropos, but with an argument going on over exactly what it is, Marcus puts them on hold.

The Commander of the Valkyrie, Sofia Behari, order the alert Vipers to launch. Deadlock buzzes the station and then gets Stump to take a closer look at the Scarab. Aboard that ship, the crew in the cockpit get a very close look at a Colonial Raptor and are near-blinded by its searchlight before they call up Holtzer over the radio.

When the Valkyrie hails Atropos again, they get a more welcoming response. The duty officer placates Marcus' concerns that there may be a Cylon Basestar nearby (the nearest one was last spotted over 0.5 AU away and heading in the other direction). Behari orders two Raptors across, one with a squad of Marines and the other with technical experts, including Doctor Lennox.

The Doctor dresses in casual wear, only his ID proclaims him as a military man. His hardened face and steady eyes are renowned aboard as hallmarks of his medical skills; though they also hint at his cynicism.

Lieutenant Duncan Lennox is cornered by the XO, Colonel Tom Burns, who instructs him to go across to the Atropos to identify and requisition whatever medical supplies he can find there. Lennox gives him some grief about being a delivery boy, but Burns declares that if he'd play nicer with everyone else he wouldn't be left as the oldest Lieutenant in the fleet (with a bit of seniority he could send over someone else to do the grunt work!).

As he examines the station's resources, he relates what he knows of the Cylon attack, the Fall of the Colonies, to the others:
The Cylons struck the main Colonial Fleet without warning, and preceeded by a powerful network virus which disabled most of the Battlestars instantly, rendering them defenceless. In the chaos that followed, the Valkyrie, docked at the Scorpio Shipyards and offline for maintenance was immune to the Cylon virus, spun up her systems and jumped to Caprica orbit. She engaged in combat with two Cylon Basestars and expended several nuclear warheads to come out on top of that fight. Further Cylon reinforcements led Commander Behari to cut and run, despite the presence of a small group of civilian ships nearby. Then they saw the circling Basestars begin a nuclear bombardment of Caprica itself.

Rhys Meirion appeals to the military officer's humanity and oaths. Surely they will not just ransack the station but will bring everyone along with them wherever they go. Deadlock accedes to the pressure from the compelling professor and promises he will bring it to the CO. He does make the point that they should probably leave Cylon-controlled space, there's not way they can fight the concentration of Basestars that'll jump them if they make a serious move into orbit. Hiding in this area isn't a long-term plan either.

Captain Holtzer sends over the Scarab's specs and inventory to the Valkyrie and organises work parties to cross to Atropos Station to load up everything into the other ships.
The Sinqa (a mining ship) and the Musuq (a freighter) which work closely with the station are packed with supplies and their skeleton crews supplemented by skilled personnel out of Atropos. The Scarab takes her fair share as well, but the Valkyrie takes the majority of the 423 people who called Atropos Station their home.

Professor Meirion and his students supervise the transfer of the Relics, they'll be going into the vacant ancillary medical bay alongside Doctor Lennox's infirmary. As the lugging occurs, Duncan gets friendly with Tara, a pretty blonde PhD candidate, and as she talks about the relics (or devices as she sometimes refers to them) she becomes very animated until she suddenly quietens down - as if she had lost the run of herself before realizing that she was about to spill a secret. Duncan knows that she
was about to confirm that she was moments away from confirming that they are going to activate the device!

The Doctor goes directly to the XO, and Tom Burns wants to talk to the Professor about it. Meirion is not intimidated by the forceful officer (no mean feat - he eats junior officers for breakfast!) and keeps a clear line of reasoning going under Burns' glare. The relic in question is most probably a communications unit, meant to coordinate the other relics' operation.

Burns orders a medical examination of Meirion and all those in contact with the relics - hearing the Professor's stories of how he believes these are ancient relics of pre-Kobol creatures (he's not even sure they were human) gives him the creeps.

With Marines on guard, all of Meirion's students are given in depth scans by Doctor Lennox. The Professor is quite indignant, and insists that others involved in the transfer be tested also. It'll be a few days before the results come back.


*
A few hours later, the Valkyrie loses all power momentarily. In fact every ship and the patrolling Vipers lost power as well. Behari places the fleet on alert and orders all jump-engines to spool up to get away from Atropos. There's nothing on DRADIS, but then Lieutenant Albus relates his calculations that the spread of power failures suggests that the event began inside the Battlestar itself!

Professor Meirion finds the relics, but it's obvious that one (yes, the one in question earlier) had been activated. Commander Behari calls a meeting with the senior leaders of the fleet. Meirion tries to grill her about her plans and Holtzer joins in with concern as to how vulnerable the Valkyrie is to these power outages (not realizing that the Valkyrie was offline due to standard maintenance for the Cylon attack). She counter-attacks with questions as to the nature of these relics.

She informs them that Meirion and his team will have no contact with the relics until she is satisfied that they prove of no further danger to the ship. They will in fact be moved to the Musuq (by Holtzer's crew). And despite Doctor Lennox's misgivings about relating the name to her, she places Tara in the brig immediately. Deadlock will put a permanent patrol around the Musuq, which will be stations well away from the other ships.

Concessions are argued out of Behari, but not many. Lennox will begin the interrogation of Tara, and Meirion may supervise (in an absolutely hands-off role) the transfer of the relics.

Next Session: Disputed Territory
Played by Donogh on Saturday, June 06, 2015