The team of new superheroes are still recovering from their encounter with BlackJack at Hank's Arcade, but their morale is high even though they only drove him off. 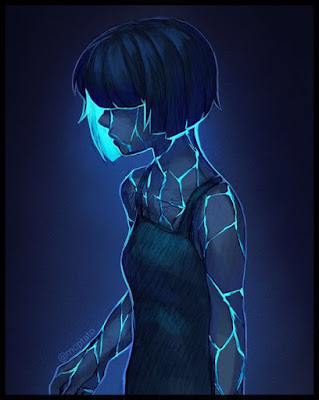 A way across town, Javi (El Serpiente, the Nova) has just finished tidying up the green grocers and his boss (and landlord) gives him a tired smile
-You're a good kid, Javi.
He's still boiling over from the fight with Blackjack and Ignacio's kind words settle him a little

A minute after Javi arrives back at the apartment, Anita gets a call from work. She has a short conversation but it looks like she has to go in. He walks her downstairs to the Uber-shelter to wait for the car the office just called for her.

An awkward conversation ensues. She's not particularly happy with hanging around for ages, albeit with his lovely friends, waiting for him to come home from work [irony alert!]. Lucia (Bruja, the Doomed) uses her mind powers to give Javi advice, but it just seems to distract him.

He promises that he'll be better at this, and is going to pick her up from work later - she doesn't know how long that'll be, she might be scouring the server rooms for issues all night; but it's appreciated.

Upstairs, Gus (Tag, the Innocent) and Shadow (the Beacon, who's real name is Simon) continue talking to Julie, while Lucia is zoned out.
They probe the backstory a little, Lucia never really told them what happened. They don't asks outright, so she just fast-forwards to her moving to Halcyon City for a job. But Shadow is sure there's more to it - there's definitely unfinished business between her and Lucia. Julie intend to resolve this traumatic incident with her childhood friend soon. That's the real reason she came here.

The need to get to the bottom of the Red Queen's plans, so they head out to scout out another arcade to see if there is any other activity going on. They head to Diego's Diving Bell, reputedly the best place in the city.

Tag and Bruja head inside, and while the place is crowded (and impressive) the first thing they spot is a woman talking to Diego (or at least, the manager) outside the back office. It's not a comfortable conversation and they move to intervene. Diego starts to clear the whole place at the woman's behest and she turns around, looking satisfied with herself.

Bruja angles for a good opportunity and steps back away from her opponent, around the back of a VR machine. A moment passes, and she hears an electronic whirring noise; she's curious and then pokes her head around for a look.

The woman has transformed into full 'tron' mode and is now identifiable as K-0S. She is waiting for Bruja, and her outstretched hand zaps Bruja with a nice-sized taser-shock.

Bruja is thrown back, and loses control of her powers, they lash out, and draw life-force out of those nearby, including Diego and a couple of players he was helping get out of VR.

Near the doorway, Tag was trying to figure out what was most amazing about this place, when he noticed K-0S change. He winds up and charges around the room evacuating people as the fight between Bruja and K-0S heats up.

Bruja flings a VR machine into K-0S with her telekinetic powers; smashing them into the back office. K-0S responds in kind, kicking the VR machine back into Bruja, and while she's looking very proud of her form and style. Tag yo-yos into her. He's back where he started, but K-OS is out for the count against the far wall.

Bruja is in a nasty mood, and standing above her defeated enemy she hears her whisper
-You're not going to stop me. I'll avenge them
before she smashes the credit-card reader into her face, breaking her nose.


**
They search K-0S and find a slim laptop and a sophisticated looking outsize USB key (probably for an info-dump). The laptop looks super encrypted, and he reckons that the best bet for getting inside is to convince K-0S to give them the password.

They also find a key in her back pocket and the Impala it belongs to outside across the street. Rather than wait for AEGIS they decide to bring her to Bruja's Sanctuary. It's an abandoned datacentre which was forgotten by Halcyon Analytica when the town it was based in 'Los Lobos' died on the vine. It's well outside the city limits and was by-passed by the freeway so it's very quiet.

Bruja brings her and Shadow inside a virtual construct. Tag stays outside to keep an eye (El Serpiente has signed off to go collect Anita). Bruja explains that it's built using modelling from K-0S' mind, to help put her at ease.

They're on a terrace, on top of a gigantic skyscraper. Wearing party outfits (black-tie, not rager) and drinking champagne. They look for an introduction from K0-S and she wheedles their real names out of them before she gives her own
-It's Betty
She wonders if they've ever been to Houston before. They try to get some more information what she was doing, and she finds it preposterous that they think she was working with BlackJack or for the Red Queen. She didn't want to insert some kind of Trojan Horse inside Halcyon Analytica. She wanted to get information out of them and AEGIS
-People like you killed my family
Not supervillains, superheroes. And AEGIS know exactly what happened and covered it up to protect one of the 'good guys'.
-Stay out of my way, don't interfere with my plans, and I won't burn this place down (either literally or metaphorically
Shadow exchanges a questioning glance with Bruja.
-You didn't think you could trap the pre-eminent hacker of her generation in a virtual construct and not have me break it in a nano?
She smiles, and places her empty champagne flute on a passing waiter's tray.
-Enjoy this champagne for a while, you'll get out in a while, and I'll be out of your hair
She walks over to the elevator doors, and gives them a wave as it closes


*
Betty is on her way out of the facility (after retrieving her stuff) when she passes Gus, making tea in the kitchenette. He looks up and their eyes meet. He establishes that his friends are still ok, and she placates him - they'll be out in no time and they'll be fine (maybe a slight champagne headache).

For some reason, she tells him what she's trying to do and they come to a deal. He'll help her infiltrate AEGIS, and she'll share whatever information she can dig up on Catcher afterwards. He wants her to give him a way to mess up Catcher's cyborg arm.

She tells him that years ago, Catcher tried and failed to save her family. She really should have recognised him.

He watches her drive off in her Impala with anticipation.

When Simon and Lucia come to they can't believe that Gus left her go. But he feigns ignorance. They argue whether she's a villain or a misguided hero and he just shrugs. Lucia and Shadow berate each other, there's a certain hopelessness in the argument.

Simon starts walking home - it's a long walk and he calls Sydney, his sister. She's worried about him, being out in the wastes without anyone and she tells him exactly where to stand to wait for her. She's going to collect him. He knows that she has better things to do with her time. When he hops into her car to head back home she tells him that the psych from AEGIS, a Dr. Burke called again for his evaluation tomorrow morning.

Lucia stays and sulks; wondering how she can track where K0-S is gone and what she's up to. It'll require help from Anita, and will open her to danger from AEGIS (as well as stirring up trouble associated with her Doom).


Next Session: It's Complicated
Played by Donogh on Thursday, June 14, 2018