The group assemble to visit Hank's arcade to get a spot on the latest/greatest VR experience.
Gus (Tag, the Innocent), Lucia (Bruja, the Doomed), Javi (El Serpiente, the Nova) & Simon (Shadow, the Beacon) are hanging around outside. Lucia really doesn't want them to go in because it's a Halcyon Analytica module, and she doesn't trust anything to do with Brad Armstrong. 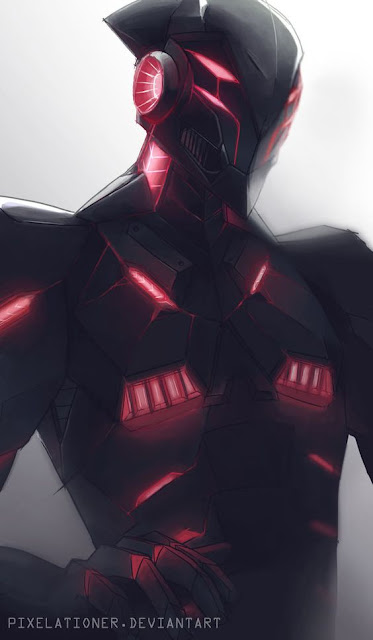 She's explaining her theories on how they've triggered psychic absorption loops and sucked the life-force (and possibly souls) or participants and onlookers into the mainframe when the doors of the arcade bust open, and Hank is propelled past them and onto the sidewalk, he slumps back down after trying to get up, dizzy and concussed. Inside there are screams and panicking players and the assembled young heroes see a figure in black with red accents shape up for a confrontation.

BlackJack exits and instantly grabs Bruja to start to strangle her. Tag leaps into action to take her out of the danger, while El Serpiente lashes out with a (too-powerful) reality storm. Across the street the fruit outside the green grocers (where he works) pop with the overpressure.

BlackJack climbs to his feet inside the Arcade, his powerful raygun supercharges with the extra energy.

Tag fast-forwards loose masonry into him, and in his anger, BlackJack misfires the raygun, discharging it inside the arcade instead of directly at them. The VR modules overload as well though, and many who are still hooked up are disoriented with sensory overload.


Shadow uncloaks, breaking through the internal wall connecting the arcade with next door to surprise BlackJack, grabbing the raygun. That breaks the psychic link between BlackJack and his gun, making him fear for his life and he flees out the back door.

El Serpiente tries to grab him, but BlackJack escapes, blocking the route to follow him. Tag intercepts though, running too quickly around the block to meet the villain in the alleyway behind. the arcade.

BlackJack smirks at the young hero. They've met before and he is curious
-Want this to go the same way as before?
Tag is shocked. Did his future self have something to do with BlackJack? Did they conspire together to betray friends!

When Tag doesn't respond, Blackjack grabs him and throws him through the back door, making good his escape! When the others get onto the scene, the villain is in the wind.

In the aftermath, Bruja suspects that some of the more lethargic players have leaked an aspect of their souls into the Halcyon Analytics mainframe. Shadow figures out that BlackJack installed a virus on some of the machines in order to wreak some havoc in pursuit of the Red Queen's grandiose schemes.They want to wreck the functioning models, but Hank pleads with them not to; anyway, if there's a fault they'll be swapped by the company and he'll get new ones.

They are considering telekinesis to get one machine out, but then AEGIS arrives.

El Serpiente is rather worse for wear. His powers have taken a toll on him, and he wanders across the road to help Ignacio clean up the shop, now just Javi.

AEGIS are confiscating all the Halcyon Analytica modules and Shadow needs to warn them about the Trojan inside. He calls the anonymous hotline, but sticks around to keep an eye on proceedings. There's a crowd gathering around the perimeter.

The Agent-Super pairing arrives as part of the investigation. Agent Jones and Anaconda seem like an incongruous pairing. Javi eyes up Anaconda, the powerful superhero has definitely got something that he aspires to (and it's not just the name).

Bruja (now Lucia again) gets a call from her best friend Anita, to tell her there's a surprise visitor outside her apartment. Someone from back home.

Shadow (now Simon) overlooks Agent Jones at the cleanup. He eavesdrops on her conversation with a Director Burke about a group of "Juniors" (apparently that's what AEGIS call the new generation of supers). He jots down a note, with more details on their theories of the Red Queen's plot, and slips it into her pocket as she goes through the crowd to interview a witness. Anaconda is just sitting on the ruined wall where the group sat earlier. He's too calm and collected to be real. If he were anymore laid back, he'd be horizontal.

They arrive at Lucia's apartment to find Julie Perkins chatting with Anita. They seem to be getting on, and Anita tells Lucia that Julie has a surprising number of embarrassing stories of a much younger Lucia!

They seem to all get all remarkably well, especially when an almost-full bottle of Tequila gets pulled out. Julie was the only friend of Lucia's who survived her super powers awakening, but she doesn't remember much of it. She's just gotten a job working PR at an agency.

She has an improbably story of finding Lucia's ID at the bus station (where Lucia works) and getting the address out of a co-worker there.

Lucia's going to revisit Hank's to try to gather some of those remaining soul shards. Simone is applying for work in an agency that does janitorial work at Halcyon Analytica.