Later that night (well really early the next morning to be fair) Javi (El Serpiente the Nova) picks up Anita from work. He's borrowed Igancio's pick-up from the store and has flowers for her. Despite being dead on her feet, Anita's really touched and they head over to a favourite diner to grab breakfast.

The buses passes are plastered with Armstrong for Governor art. Halcyon Analytica and Armstrong have invested a lot in the city's public transportation network.

They grab a booth and Anita is pretty much falling asleep, but they are definitely smoothing over the previous night's awkwardness and having a moment when a flash of dark purple light erupts from the kitchens. The swirling vortex spits something out of the ceiling...

Bruja (the Doomed, aka Lucia) ambles through, ignoring the astonished fright of the kitchen staff. She needs Anita's help with taking on Armstrong, and finding out where K-0S has disappeared to. She wants to make sure that she gets a proper night's sleep and is ready to take on that difficult (dangerous) task. Trying to convince Javi to allow her to bring Anita home thought isn't quite so straight-forward. And they pretty much wave her back outside while finishing their breakfast. Anita and Javi laugh at how weird and strange that was; she must've been up to something else and just spotted them here, she can't have used the portal to follow them here...right? 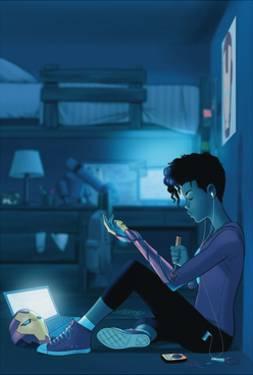 Simon (Shadow the Beacon) plays for time at home. Eking every minute out before Sydney, his sister, loses patience and drives him to AEGIS for his appointment with Dr. Keen. She's not working until late, but still she has her limits.

She pretty much marches him inside and through the security gate. They spot Anaconda, hanging out with a few people, looking very cool (and more laid back and he'd be horizontal). A young man called Chris meets him and escorts him to the doctor's office. Simon's offered a coffee while he sits in the nice waiting area and about ten minutes later a tall stern-looking man appears. He brings Simon
into his office; it's quite large and overlooking the river and the fact that they're still on the ground floor but appear to be several stories up from the river below shows just how large and sprawling the AEGIS building is.

Simon is a withdrawn participant, not easily drawn in by Keen's questions. He sees himself as a lame superhero, without any powers worth the name. He doesn't engage with Keen's techniques until it's made clear to him that until AEGIS is satisfied (on Keen's recommendation) that he's not a danger the sessions will continue. And if he's considered a danger? A different recommendation will go to a particular group elsewhere in the building.


As Gus (Tag the Innocent) goes on his morning delivery route, he's met by a young trendy looking woman. Tag's not used to being intercepted at all, so he stops (he's not going to be late with his run or anything, given his super speed, so why be rude?).

She wants an interview, mostly about him (she knows he's called 'Tag'), his role in that showdown on the lake against this ultra-speedster villain, and about his fellow team-mates. She squeezes some answers out of him, including Catcher's name and he promises to give her a proper interview and put her in contact with the rest of the team!

To blow off steam, Simon sneaks into a nearby mansion - poking through people's stuff and playing their video games helps him relax and forget the ordeal of being Simon for an extended period of time.

Lucia also does a bit of sneaking; stalking Anita & Javi to make sure he leaves and then breaking in to steal her ID card from work. She has a plan...

Later on, the team are discussing their suspicions of the Red Queen's plot with/at Halcyon Analytica and Javi spots Anita's ID on the table. He loses his shit with her, he doesn't know exactly what it means, but this kind of stalking can't be tolerated!

Javi surges to his feet and grabs her, to throw her across the room. But he mistimes his effort and Lucia grabs him into a hug instead. Standing too close together and in this hug, Javi just kisses her - it seems hard and passionate but she has no idea where this is coming from!


Lucia breaks away, confused and befuddled. She erupts into a stream-of-consciousness confession; she's sorry for everything! And then she escapes to the toilets.

Gus comforts and empathizes with Javi, wondering why he did it. Javi unburdens himself a little but Anita walks in on the revelation and is speechless until Lucia comes back out. She turns tail and walks out to the street and away. Javi thinks she'll get over it and he can catch up with her later, but Lucia chases after her.

Lucia rushes to figure out a good way of convincing Anita that...she should come back and help her. She considers opening a psychic connection with Simon to get his advice (though he's on team Javi!) or maybe moving them into a construct would help  (though that's not exactly the best honest approach to keeping someone onside).


Back inside, Simon and Javi open up. Maybe that wasn't the best course of action to take. He just got carried away. He doesn't know if he really fancies her...

Lucia jumps in front of Anita. It's not easy, but she think she talks her around. Lucia didn't mean for it to happen and Javi kissed her first. She wants to trust Lucia, they've been friends for longer than Javi's been around. If she can get Javi to admit that he kissed her, and if he reads her in about all her theories on Halcyon Analytica and if she can convince her that Brad Armstrong is a villain; then they'll be OK.

They head around the corner to O'Leary's for a drink. Unwind a little bit of the tension maybe.
Lucia brings Anita inside a psychic construct, where she shows her the souls shards of the defeated players from Halcyon Analytica's VR arrays.
Inside the construct they learn something about one another:
-that Anita objects to the VR project, she's uneasy about it
-that Lucia really cares about Anita and wants to protect her

They call Gus and Simon to come join them (Javi has had to go to work) and they have fun for a while. When Lucia heads to the bar to get another round, Anita siddles up to Gus to suggest that he asks Lucia out some time. She has a feeling it'd be well-received!

Up stalks a woman. In a sharp suit and with a platinum bob. It's Wa® a bronze-age super in the same legacy as PestilenZ. She wants to know how he died. She knows they were involved in the incident at the docks.

They're uncomfortable, she's his mother and they didn't really know her at all. But she has a scary and forceful persona (unlike the aspect she reveals when asking about her son's death).

Gus tells her the story; that Halcyon Analytica planned with Catcher to trap Tag; Lucia was with PestilenZ having coffee and when they sprang into action he went to investigate the containment device aboard the ship. Wondering what she'll do with the information, she tells them that she'll catch him and step on his throat till he's dead. They can come along for the ride, but she's exacting this brand of vengeance.

Simon wonders what would happen afterwards to her, and she brushes it off - they're be a psychological assessment of course, but nothing she can't wriggle her way through. The trick is to know the best not-perfect answers to give. She can give him tips to get a whistle-clean reference from Dr. Keen if he helps her.