They all walk out to the common area outside. They're without the soldiers now, so they can pretty much go wherever - it would seem that Viktor trusts them about as much as he trusts anyone - though he still doesn't think they'll survive.

Snaps the Muscle and Lucky the Scoundrel head out into the jungle in the borrowed rover. They've gotten the route and last known location of Samara and her escort so they'll head out that way and then get a bead on the signal when they're in range. Samara was originally heading to some old ruins far out to the NNW, but it doesn't look like they got there.

They get one more look at the claw marks and surrounding scorch marks on the gates. On second thoughts they think this is less of an abortive attack and more like something marking its territory. 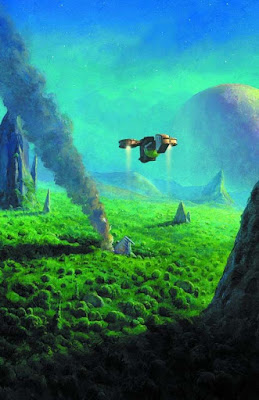 Bevan, the Mystic heads back to the shuttle where Zerocs, their pilot (callsign: Falcon) is waiting. He opens the shuttle bay doors for Bevan after he gets the call. They're going to stay above the interference signals everything on this planet seems to emit and try to triangulate the signal with the rover team.

The road is overgrown, but on closer examination is just a track, not even dirt but flattened and burnt growth on top of tangled briars. It's humid and dark with the canopy overhead.

Zerocs and Bevan fly out over the jungle, heading towards the ruins. Zerocs scans the jungle with his infra-red sights, while Bevan attunes to the presence he feels below, though they attract the attention of something dangerous as they fly lower. Bevan climbs out the hatch, firmly fastening himself with a safety harness - he'll suppress the hell out of anything that threatens them with a heavy blaster.

He gets a sense of being surrounded by something all-encompassing, like a mist. It's like the whole jungle is one organism, and the individual creatures inside it just serve the jungle's will.

Falcon gets a ping from the tracker and it suggests they're heading in the right direction at least. They do a long looping circuit, to see if they can get another ping from a different angle and get a firm location on Samara.

They zoom past a hill, and Bevan has a strange feeling - like they're a pebble dropped into a pond and that the circles are rushing out to the rest of the jungle; and that the jungle is pushing back. No movement or pattern to it, just a general awakening. They feel a subwoofer-like hum underneath them.

Something that's felt much more urgently below by Snaps & Lucky. Lucky drives the rover as far as he's able, but soon they've come to the end of the easily traversable track; and while, if they just followed what seems like SOP down here they'd just burn the jungle, they feel like that might not be the best course of action.

They stop and try the signal again - they get a clear reading and when they talk to the guys up top they get the triangulation sorted out. They spill out of the rover, and pack their stuff. They're about a klick away from Samara's signal.

They'll continue down the rough track for a half a klick and then cut cross-country. Snaps checks that Lucky is ok for water and finds the canteen is full of rough hooch! She pours it out and gives him a spare of her water.

It's very subtle, but as they move they realise that they're being stalked. Whatever's out there is effortlessly keeping their distance. They move quicker through the jungle but the encircling things keep pace, although they keep their distance.

They come to an open area, in the center of it is a small stone hut (which looks to be similar in material/design from those ruins to the NW). The shuttle passes overhead and as they advance the door opens and Samara pokes her head out


-Get off the ground! Are you crazy!

Above, Bevan soothes the jungle back into a calm slumber and a few giant manta ray-like aliens come out of the jungle (they can't possibly be flying through the trees, they're over 6m wide). Bevan's shocked by how large the mind he's feeling out is - it's almost too big to complemplate.

Lucky & Snaps spot a human body on the other side of the clearing, but discretion is the better part of valour and they rush into the doorway, and Samara barricades it shut.

Inside, Samara quickly explains the body outside - it's Olun, who was just killed as he tried to escape a half hour ago. The rest of the story is quick to relay in broad strokes

-She had a lead on an UR artefact in the ruins to the northwest
-that ruin had been long picked clean by other scavengers and they cast around for another
-when they veered in this direction on the way back their rover crashed and they scrambled here, only 3 of them made it
-this is just the tip of the local ruins, and there's an overgrown complex underneath

She's worried about them, they should never have come here and will be trapped here forever with her, unless they have an army nearby
Lucky glances at Snaps
-She's your army sister.
Snaps grins in anticipation, checking outside for a way out of here.

Bevan's working to spook the jungle's IFF, make it seem like those on the ground are just a natural part of it. Maybe it'll buy them some time. Zerocs is formulating a flight-plan to lower a cargo net to allow them all to climb aboard without spending much time on the hostile ground outside the hut.

Bevan realises that this mind is more like a god's - powerful and intricate. He can sense only a facet of it. It can't be fooled, but is amused by their antics. So long as they don't pose a serious threat, it will give them what he asks for.

The cargo net is lowered and the three on the ground clamber up to climb onto it. And all hell breaks loose. The manta-rays appear in strength and now from this angle they can see the underside of them is claws and teeth - they climb along the trees, they don't fly.

Snaps triggers the circle of grenades she set up in preparation for their escape and it catches a few of them, tearing them asunder, but one of the grenades bounces into one of the creatures and back towards them and the shockwave is too close to the net and they all spill out and onto the ground!

They run for it. Initially they make a bee-line for where the rover is parked, but then Lucky maps out a route - taking advantage of the fact that the aliens climb trees to go through areas with low scrub and smaller trees. Snaps holds up the rear to cover them but they make it to the rover without too much trouble. A bunch of the creatures try to swarm them and Snaps takes out Zara, her detonator launcher, and forces them back.

They leap aboard and drive away, as quickly as they dare. That sub-woofer thump returns. As they drive away, with the shuttle a couple of hundred meters up they see a wave or ripple underground moving towards them fast.

Zerocs opens a channel to the Firedrake in orbit and does the telemetry on the shot from her particle cannons. It's risky, but on urging from Snaps & Lucky he takes the shot, caving in the layers in the ground that whatever-it-is was using to follow them. The impact and the collapses causes it to take a detour and by the time it's back on their trail they've made it to the basecamp.

Snaps reminds Viktor that they still want that targeting computer for the Firedrake! The shuttle lands and brings them all back to the ship. Samara just wants to head home - despite the fact that she and Viktor are lovers (without Vorex's knowledge)