As the Orphans of the Bloodmoon prepare to deliver a first strike in their war with the Eels, great news comes through: Quess Salkara, an old friend, has assembled a group of independent and tenacious killers to join the cult. They notice that they're all principled and savage, and may not be the easiest to control once they settle in. 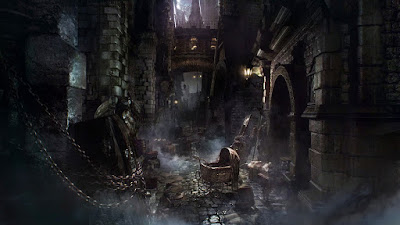 Gap, the Lurk, scouts out the Eels - there's only seven or eight of them left now (maybe a few have ditched now that they're at war), but they realise that they need to tool up to counter Monger (after the beatings the Cutter has dished out) and apply their superior numbers (or so they think). They've arranged a deal with Thena (who's associated with the Gondoliers) and they're going to meet up at her warehouse to pick up the weapons the next day.

The Orphans play with the idea of ambushing them on the way to the arms deal, but it seems too risky and prone to stepping on other people's toes. Instead Monger starts a pub crawl, going to several of his usual haunts, and giving the appearance of getting completely wasted. When he gets to 'The Devil's Tooth', Telda (a friend of Gap's) scurries away to the Eels to let them know that their bane is ripe for the taking.

After having a couple, Monger stumbles out the backdoor into the alleyway to take a leak. He's holding up the wall, when two Eels walk up behind him; Jarrek brandishes his sword, while Finn grabs Monger's shoulder and spins him around to face them.

Perched above them, Gap clings to a window sill and eyes up the five Eels further up the alleyway. Armed with long knives and boathooks, they're obviously there just in case. Two of Quess' killers loose their crossbow bolts from the warehouse roofttop on the other side of the square, and the two Eels who are closest fall to the ground. Gap and the other two killers jump down from their perches to take on the others.

As Jarrek and Finn look around, Monger springs into action, headbutting Finn and stabbing him repeatedly in the kidney. Jarrek steps into attack and the strong swing is blocked by Finn's shoulder and Monger's well-concealed armour.

Gap avoids direct confrontation with the three Eels in the alleyway, spinning out of contact with a series of cartwheels and wall-runs. As they're disoriented and confused, the Quess and her two assassins combine to kill them all.

Monger squares up against Jarrek, who seems pretty handy with a sword - but seeing Gap positioning himself behind him, Monger charges into the Eel with a body slam, taking a sword in the chest and pinning him to the ground for Gap to slit his throat.

Hearing the peel of the bells from the Bellweather Crematorium, the Orphans make themselves scarce.

Heading back to their lair after a family gathering, Monger starts to notice that as he passes by a bridge, chains along the canal begin to rattle, as if being clutched at from the water. Totally freaked out he avoids that area the next day and takes a gondola on a long detour. However, as his attention drifts, the gondola is bumped from below and the gondolier quickly pulls up to let Monger off - he won't take the Cutter any further - he's being stalked by the Unquiet Dead. So he pays off a local Whisper to take care of it for him; he won't call on the Spirit Wardens.

His dinner with the family was genuinely warm, for once, and even his father's overbearing tyranny take a back seat. Monger has been trawling old family friends and business partners, to arrest the fall of the family's good name. He has an eye on regaining its former honour and glory, and doesn't mind letting those who are laughing at his father see the cleaver (that shuts them up). He even spends some of his ready coin hiring in some respectable servants for the household again.

Gap heads to Ojak's market in Silkshore to trade an interesting artefact he found in the Eel's lair. He picks up an old vial of Thought Essence and takes it to the park across the river from Charhollow where he indulges in it:


The beginning of the memory is quite normal, a highborn noble at a lavish party. From the fashion, about a hundred years ago. After some pleasantries, the noble walks outside to a park bench - he doesn't feel well, and quickly realises that he's been poisoned. The three suspects in his mind are The Emperor, Lord Kline and Lord Scurlock - either notable enemies, or those who may be disappointed at his recent indiscretions. Looking down, the noble's last vision is that of his richly embroidered waistcoat, missing a button.

When Gap snaps out of it, he realises that the waistcoat exactly matches that from the memory - in fact the missing button has been replaced with a cheap brass knockoff. But the shock is overwhelming, and Gap is lost for a while...