Monger goes looking for trouble - and he has his eyes on the Eels. Kick them while they're down he says to himself.

Discussing the ins and outs of how the Orphans can position themselves against the Eels, he identifies the Fog Hounds (a crew of rough smugglers looking for a patron) as likely allies to take on the task. Also, he reckons they can put their friends the Deathland Scavengers in contact with Lord Scurlock - he's always on the lookout for strange artefacts from beyond and the Orphans will act as a go between with the Fog Hounds to move occult trinkets between the two. 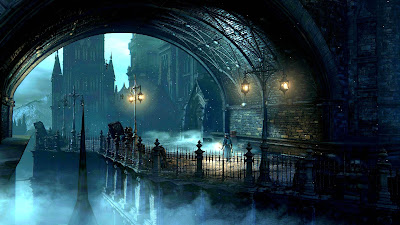 He ends up in Brogan's, one of the bar's in the Eel's old turf, and gets Lucella to give him the run-down on how the Eels usually get their gear into Doskvol - it's not well known but she knows well that most of their runs come directly off one of the Leviathan Hunters. She doesn't know the names, but can give Monger the days the last half-dozen shipments came in - should help track them down.

He heads over to the Docks, where he meets Grace for a coffee outside. She knows the ins and outs of recruitment on the Leviathan Hunters (and never does anything dodgy with the knowledge...) and, not surprisingly narrows down the ships the Eels must be using to the Salty Pig and/or the Dragon Heart. The Salty Pig is due in tomorrow, so it should be easy enough to spy the Eels make contact as the unloading activity dies down and only a skeleton crew are left aboard.

As the Eels' gondola heads down the canal from Crow's Foot into Charhollow, it hits the heavy chain under the water, coming to a sudden halt!

Monger jump aboard from the bridge overhead, unslinging his heavy cleaver as he lands on the deck and quickly engaging the three smugglers aboard. He barges through the two shipmates who have rushed back towards the stern to repel him, but his attack only puts himself off balance - he stumbles over an oar and saves himself from ending up in the water by swinging around the prow (a wrist strap keeps the giant cleaver with him as he comes back aboard).

The two smugglers come right at Monger, but he ducks under the first one's blade and decapitates the other, blinding the first with the spray of arterial blood. The blinded guy falls into the canal and disappears.

The gondolier has dropped his pole and now pulls a carbine out, cocking it and pointing it directly at Monger: who snarls and wipes the blood off the cleaver. He's so savage that the gondolier loses his nerve and jumps for the canal stairs nearby, dropping his weapon but clutching the merchandise bag.

Monger hefts a nicely balanced throwing knife and grins as it thunks into the fleeing Eel's back. The merchandise spills into the canal water and Monger has no time to try a proper retrieval effort - the Bluecoats are on the way. Looking behind him, he notices that the third Eel is clambering out of the canal - definitely not blinded now.

The heat is massive, and Monger is picked up by the Bluecoats this time. He bribes the hell out of Sergeant Haig, but Monger helps matters a little by telling him that they weren't the only ones after the Eels: the Fog Hounds were gunning for them as well.

Thing is, now the Orphans are at war with the Eels.