They return to Adar with news of the impending Zirg attack - he gathers every scouting captain available to send them out to screen the army. If it can deploy in time; the Emperor has taken ill and the most senior commanders have been thrown into disorder. Malerre brings his war-band back into the skirmish line as soon as they're ready to find the Zirg's skirmishers already jockeying for position along a ridgeline - screening the well-dressed lines of their army behind. 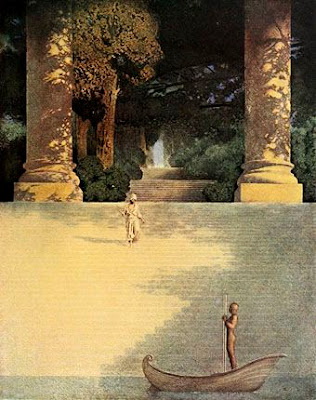 Some light skirmishing breaks out, but as the Emperor's army gets into some kind of shape, an small group approaches from the Zirg lines. The banner of the Count of Zirg (a gold Gryphon on a field of green) flutters above them, and the Count's retinue demand that Malerre bring back the Emperor for a parley. Sun, the Child of Battle and Jasner, the Sword Master remain at the front line.

Malerre rides straight to the Emperor's tent and after a brief discussion with his chamberlain, is shown inside. In the centre of the grand tent, sits the sickly looking Emperor - as pale as a man of his complexion could look and sweating through his night gown. Taking a instant liking to Malerre (it would seem), he entrusts the responsibility for these negotiations onto the Wolfshead.

First off, he wants to show a general state of ease with the Count of Zirg by sending an emissary to negotiate on his behalf.

Secondly he is willing to offer these concessions to the Count:
- that the County will enter gain full accession to the Empire's trading agreements
- that the Count will be given full Imperial Court privileges

In return he must receive this territory into The Empire. He would also like to receive a gift from the Count of half the number of war elephants that are with the army, along with all their trainers and accoutrements (within the year), and each year thereafter a breeding pair.
If he must give additional concessions, he can grant a mutual defence arrangement (understanding that The Empire would never ask for such aid from the County)

Back at the front line, Jasner eyes up their opponents - by and large they are well armed, possibly on average better than the Imperial army. To the right hand side of the Count is a monstrosity of a bodyguard, holding a greatsword as if it was an arming sword, and somehow managing to make the great warhorse he's sitting astride look like a pony.

To the other side of the Count is a slight woman in court clothes - and by the way her and the Count speak, she must be his primary advisor.

Behind them are a few dozen mounted soldiers, and if hostilities break out, their war-band will be quickly overwhelmed. The army behind them look ready for battle and will have a definite (if temporary) advantage unless the Imperials can bring their greater numbers to bear. In fact, Jasner reckons he's much better off riding for the nearest friendly scouting company, rather than try to fight or race back to their own army for safety.

Returning with the Emperor's chancellor and some notaries, Malerre presents the terms. The Count obviously struggles with the prospect of giving up territory without a fight, but when Malerre suggests the prospect of making it a dowry for a marriage into the Emperor's family, he seems much more positive. The Zirgian party withdraws out of earshot for an intense discussion, but when they return, the terms are accepted.

Back in The Emperor's tent, the first thing he notices is Sun - who answers a shower of questions about his heritage with infuriating obfuscation. When Malerre steps in to give some clarity on which desert Sun is from, the Emperor wonders if they know a Temple of Rania; and both Malerre and Sun act as if they've never heard of it, and know no grand temples across the Mountains.

After the Imperial levy disbands, the core companies return to the nearby city of Tahirn. And when the Emperor summons then to the local Prince's throne room they gladly accept the invitation. The grand hall is virtually empty for their audience, and only holds some court functionaries along with the Emperor's bodyguard.

They have been disarmed and are beckoned to the dais, where The Emperor shows them a brass bowl of water. In the reflection of water, they see a crowd of worshipper gather around the viewer, but suddenly they see Cinder reach out towards them before being snatched away (only they could possibly recognise Malerre from his wristband).

The Emperor smiles: do you know this woman?


Next session: Terrible Majesty
Played by Donogh on Thursday, May 26, 2016