Previous session: Across the Mountains

Rushing back to their inn, the companions try to come to terms with this mighty and strange empire they have found themselves in:
Malerre can cope with the extravagance and wealth he knows this place can bring him.
Sun lacks the imagination to be freaked out by it.
Cinder is freaked out.

Talking to their innkeeper, a stout middle aged man called Zain tells them a little about the city, ruled by Prince Ku-Aya and the Empire, ruled by Balashi, but quickly their talk focuses on the border war the Empire is in with the Zirg to the north. His brother was in the army until recently, and he knows that mercenaries from all over take on scouting, raiding and skirmishing duties with them. 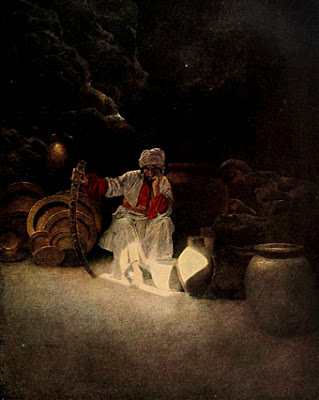 They consider what to do with the Oracles in the Temple - their best idea of how to do it, and get away with it is to suborn one of the Temple guards to do it.

Jahangir visit's Cinder's booth, thanks to a very convincing pitch by Sun - he's expecting someone to slake his thirst, but instead he gets tied up in Cinder's sorcerous puppet strings and told that he will be killing the Oracle  at the next new moon and in absolute secrecy, or he will suffer in agony and death.

They head northwards to try to get some gainful employment with the army. They countryside is idyllic, with farms and village markets and a shocking lack of everyday ultra-violence. A week up the road though, Cinder feels Jahangir try to slip his leash - she hammers his heart mercilessly and feels his will ebb away: he'll murder the Oracles for her after all.

Shortly afterwards, they come across the detritus of an army, at a crossroads, where the road gets rougher and turns directly towards the border, they come across Avit, she's a messenger for the army, but their impression is that she's on the lam. Avit shares their meal that evening, and is surprised that they don't know that 'his nibs' is leading the army: The Emperor!

They come across the rear-guard - fifty well-armoured soldiers on horseback, whose Captain queries them for a while before sending them to Adar, the commander of the various scouting companies attached to the army. On the way to the army, they spot a hundred slaughtered cattle, the first true sign of the extent of the horde - which must number thousands.

After they sign on with Adar, for standard mess rates with quartering, stabling in camp, and pillaging rights in hostile territory, Cinder eyes up the Emperor's tent in the middle of camp: it's a huge structure, with a obelisk-like eruption from its roof. As she stalks around, she casts forth, and suddenly an gap appears in the busy street of the camp and she spots the Emperor walk by - he's resplendent, but somehow understated. She sense his power turn towards her, but just then the gap in the crowded street closes and she is safe again.

The next day, they eat dust on the road, but around about noon (Sun reckons it must be the moment of the new moon when the Oracles are to be slain), the Emperor's contingent falls into chaos and the whole army stops in disarray.

They are sent out head out to scout for the enemy. As they get further and further out from the camp, they lose contact with the other scouts on their flanks and in the early afternoon, as they head into some lightly wooded rolling hills Malerre spots the glint of spearheads in the trees. They retreat to a nearby abandoned farmstead where the enemy company of some thirty warriors come at them.

With two of his men guarding the horses and one sent to get help, the warband is less than half of the Zirg attackers. Malerre puts the men at the low stone wall and gives the order for his archers to shoot at the enemy leader (who is the only one on horseback) as they approach. The first assault is turned back as the ferocity of the war-band dismays the Zirg. They fall back and the leader attempts to rally them, but Sun leaps over the wall and challenges him to a duel.  The Zirg captain spurs his horse into a trot and charges straight at the Child of Battle, who sidesteps neatly, and brings his vicious chain weapons around to almost decapitate the horse. It buckles and slams into the wall, and while the captain struggles to get free, Sun bring the other end of the chain around and the razor-sharp axe head slams into his brain.

The rest of the Zirg company flees and when they mount up to follow the retreat, Malerre spots the Zirg army marching for the Emperor's camp in haste...


Next session: Dreams of Peace
Played by Donogh on Thursday, April 21, 2016