The Noose are a crew of Shadows operating out of the back of a bakery in Charhollow. They specialise in espionage in support of Skovlan refugees in Duskwall. Their reputation is that of Fanatics, who will sacrifice for the cause, and who think that the end justifies the means. They hold to Skovlan traditions as well, like many of their fellow refugees.

The Noose is a dark name for the crew, but one with mundane origins to Skovlanders - it refers to a traditional knotted bread which is well-loved by the Skovlan people - its shape (especially when a batch has just been taken out of the oven) is reminiscent of a hangman's noose.

The close press of refugees in the tenements of Charhollow and in the tents and lean-tos of Dunslough make them particularly Slippery, it's difficult for someone not part of the clannish Skovlan society to track anyone down.


Their hunting grounds are located in Charterhall, specifically in the few square blocks where the consulates are located. Their contacts with the Skovlan Consulate (through their friend Adelaide Phroaig) helped them establish themselves there; but the Noose view many of those who work with the Consul as traitors and quislings whose collaboration with the Empire needs to be punished.

They have access to underground maps and passkeys, which allow them easy passage through the
underground canals, tunnels, and basements of the city. The Cyphers set them up with these, but what the messenger guild of the city gain from this arrangement, the Noose aren't so sure...

They stole a boat from the Gondoliers, but to placate that powerful and popular group in Duskwall, they paid them off.

The Noose's closest friend is Amancio, a deal broker who is renowned for his neutrality. Amancio is sympathetic to their cause and he backed up his commitment to them when he sent a job their way instead of to the Wraiths.

The Wraiths took this switch personally and have it in for both of them. Their mercenary ways contrast with the Noose's idealistic bent.

The Dimmer Sisters have a soft spot for Amancio, having trusted him since his childhood. He's one of the few people who enter and leave their manor house; they wonder what he had to do to gain the Dimmer Sisters' trust. 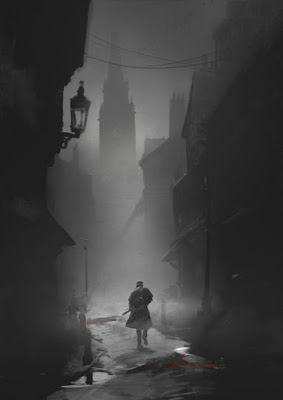 Aldric "Crow" Walund (a Slide) fought for Skovlan in the so-called 'Unity War'. While he grew up in a simple fishing village, he found a role as a messenger during the war; later rising to become an aide in service of the famous Skovlan leader, Skannon.
The bony man dresses in knickerbockers and suspenders, a Skovlan style that's popular in Duskwall as well.
His vice is the pleasure of traditional smoked fish he picks up at Slane's fishmongers & restaurant.
His specialty is in Cloak & Dagger, and back in the war his ability to slip through enemy lines was renowned.

Crow used to lose himself in drugs when he first came over to Duskwall after the war, and his friend Bryl (a drug dealer) gave him his fix regularly. Since then, he's clean, and despises what Bryl allowed him to become. He has a hatred for drug dealers and how they help keep the Skovlan people lost in stupor.

Klyra (a tavern owner) gave Crow a fair shot when he got off the boat from Lockport and was looking for a job. Her place 'The Elephant & The Castle' is located near the consulates in Charterhall, and Crow looks a bit out of place there, but as ex-staff the Slide can grab a drink or two on the QT. The place is popular with Iruvians who like the old-school ornamental wooden walls and the antique Iruvian gaming sets from which the tavern gets its name.

Phin "Wicker" Skelkallan (a Whisper) came over to Duskwall with the recent flood of refugees following the end of the war. He used to have a position as a Snare, the Skovlan equivalent of the Spirit Wardens, who protected people from vengeful ghosts.
The plump man wears a waxed coat and tall boots.
His vice is the luxury of custom-made accessories from Dunridge & Sons, the famous tailors of Nightmarket. He indulges in unnecessary items which don't take away from his Skovlan style (such as handkerchiefs and cufflinks) but has one of their lovely bags as well which he lugs around his whispering gear in.
His specialty is in Compelling ghosts to his will.

Wicker's erstwhile friend is Quellyn (a witch) who is in fact one of the Dimmer Sisters. The first time the Noose made contact with Amancio, Quellyn was very suspicious of them and thinks very little of Wicker in particular; she is dubious of the tension between what Amancio says of them and Wicker's fetish for luxury.

For the most part, Wicker finds spirit trafficking heinous, but Flint is different. So long as he doesn't deal with the ghosts of Skovlanders, Wicker finds him useful to have around. It goes deeper than that however; when Wicker arrived in Duskwall and attempted to control a particularly murderous ghost, he was outmatched and Flint's entirely selfless intervention saved the Whisper.

Grine "Tick-Tock" Rowan (a Leech) is a Tycherosi, who until recently was a professor of Sparkwright in the Doskvol Academy. His eccentricity (usually not something frowned upon by academics) got him into trouble with his fellows at the Academy, and he's no longer welcome in those hallowed halls.
He's a handsome man, who usually wears a long coat and tricorn hat.
His vice is the acquisition of weird and interesting trinkets from Ojak in the Silkshore rooftop markets.
His specialty is as an Artificer, his particular claim to fame inside the academy was his design of a timer that can be attached to bombs and such devices. Currently he has a large bomb which has such a timer, making it less than suicidal to set it off and less prone than a corded fuse to environmental affects.

Most recently, he was called in to do some emergency repairs for the Cyphers - they use a phonograph to record voice messages for some of their clients, and only he had the particular skills to fix it.

Stazia (an apothecary) is a close friend who still works at the Academy. He sometimes goes to her to acquire alchemicals, but mostly they just meet up for lunch to catch up on departmental gossip. She kept her head down when he got into trouble and has remained untainted by the scandal.

In his undergraduate years, he was friend with Malia; they debated all kinds of sophomoric nonsense back then, but since she's become a priestess of the Church of the Ecstasy of the Flesh and because of his continued suggestions that spirits weren't all bad their friendship decayed into general animosity.


Next Session: Keep your Friend Close
Played by Donogh on Saturday, November 04, 2017

Email ThisBlogThis!Share to TwitterShare to FacebookShare to Pinterest
Labels: Blades in the Dark, Noose