Previous Session: Not so Slippery after all

The Orphans of the Bloodmoon have an eye on a nearby Offertory, which one of the Forgotten Gods keeps. She Who Slays in Darkness has a significant cult who gather there monthly taking donations and offerings from locals in return for Her intercession. The most worthy of the congregation are blessed with ritual tattooing (reputed to be inked using Leviathan blood).

They're going to attempt to deceive the rival cult's followers that the site has become desanctified, or perhaps claimed by another of the Forgotten Gods.

Fancy Frank goes along to the evening offering, to scope the place out and identify a real cult member he can cosy up to. In the centre of the main Charhollow commons is an old fountain, where the cult gather silver slugs from local supplicants. Just off it is a blocked up street where he sees some leave larger donations in small alcoves in the walls - further in he spots a large black throne and it seems to gather darkness in the dying dusk light. One donor is sitting there being tattooed, and Fancy Frank strikes up a conversation with Arvus, a senior member of the cult.

Over her books, and speaking with Quellyn, Ghostblade discovers some interesting things about the cult of She Who Slays in Darkness: they venerate Bulls (the God is usually depicted as bull-headed) and use Labyrinths in their rituals and markings. Strangford advises her that, Vedat, their archivist, was a mean inker in her day - with some of the research Ghostblade has done she'll be able to do some temporary tattoos which past muster for the infiltration. 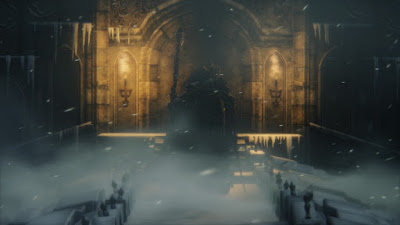 Fancy Frank goes drinking with Arvus in the Black Tree, a local pub. After a few, Ghostblade sweeps into the bar, threatening Quess (the barman) to let her doctor Arvus' pint - she knows Quess is an adherent of the Path of Echoes and will recognise the drug she's going to spike the drink with: a distillation of Quicksilver, which can make the untrained susceptible to possession.

As the pub's customers begin to make their way home, Ghostblade corners Arvus in the snug - she takes out one of the spirit bottles from the Eel's cache and forces it into Arvus. There's a brief struggle, but after just a moment, Vond makes his presence known. The ghost has a very different manner about him - particular and calculating - but he quickly takes the deal they offer: turn up at the cult meeting the next evening and announce that the site has been corrupted and claimed by the Closed Eye itself.

Strangford has utilised Monger's family contacts to source a large barrel of Leviathan roe - these proto-Leviathan resemble large eyes and he's sure they'll bring the Closed Eye to cultists' minds.

In the early morning fog, still a bit tipsy, Fancy Frank rolls the barrel into the blind alleyway - he secrets the 'eyes' into each of the alcoves. Hurrying to complete the job as he hears a few revellers returning home - he leaves his fine pair of pistols down and forgets about them when he leaves, clambering up the staircase to get into the blind alley on the other side of the block.

As evening falls again they're set up - this time Frank has gotten his tattoos from Vedat and assumes the role of a cultist. Nearby is Vond, who knows exactly when to spring the news. From a window across the commons, Ghostblade and Strangford ready a small ritual to release the fog which they have held in the alcoves all night.

As the cult and populace assemble, they release the ritual - and all the onlookers see the fog roll onto the ground to dissipate, revealing a hundred demonic eyes staring at them from the alleyway! The cultist are confused, but nothing happens til Vond speaks out and declares that the offertory has been tainted by the will of the Closed Eye: they must depart immediately and seek out a more secretive labyrinth.

The populace are non-plussed (some even take their coin back from the collection buckets!) - and the Orphans sweep in to take control of the situation.

Next Session: Waylaid
Played by Donogh on Friday, March 25, 2016