Previous session: Beloved of the Maelstrom

Taking a professional eye to the Temple of Rania, Malerre the Wolfshead wanders. He counts about 40 acolytes, but only half a dozen warriors, all wearing similar armour and with identical tattoos. The grounds are definitely not overpopulated, and it makes a lot of sense that if they had an extra 20 people recently, that they would have been sent away.

Inside the main tower, there is a large chamber, and hanging from the outer walls are giant tapestries, which go up beyond where the light reaches. Amazingly, gold coins are sewn irregularly into the tapestry; a few at the bottom and increasing in number and width with height. There must be hundreds and thousands of them on each of the eight tapestries.

Each coin bears the visage of an ancient emperor, and every eye is crossed out.

Shirat tells Cinder the Mesmerast that across the mountains lies another Empire - though she's unsure if it survived the Apocalypse, the Temple has sent missions there before, but none of the acolytes have ever returned.

Sun the Child of Battle watches Shirat carefully, and while the old woman is kindly, he knows that she does want her cult to expand. If the warband would be willing, she would hire the to cross the mountains to discover the fate of the previous colonies sent there. 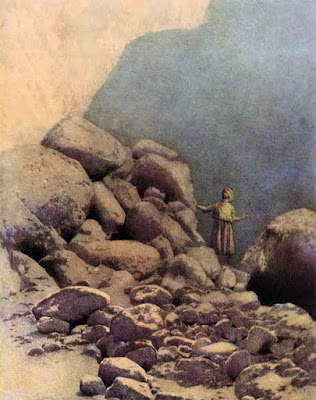 Cinder casts forth from within the Temple, to discover some truth about those lost acolytes. The Maelstrom demands that she think about what it would take for her to betray her companions - which she would for the greater good. And then it asks if she promises to do whatever Ahassunu requests of her when they next meet - and she emphatically affirms.

In return, the Maelstrom assures her that she will find the acolytes across the mountains - a sense of foreboding urges her to turn around to look at the Mountain behind her, but she cannot; why would she turn around?

Crossing the mountains is the most difficult thing they've ever done - the wind and snow challenges them all in ways the desert never could. Malerre pushes his war-band hard, they struggle, but everyone knuckles down. Sun never imagined such cold - in the numbness near the summit, the Maelstrom tells him that he must kill them all. Cinder prays for death - but the Maelstrom tells her to keep moving; she will persevere if she continues, though it cannot help her beyond.

Then, suddenly, they see the sea in the far distance! It's amazing, and initially they aren't even sure what they're looking at. Below the mountains, green foothills await them and they march into a town,

It's a city really, with more people roaming the streets than they have ever seen in one place. And there's a wide variety of people here, with dark skin (most more or less in between the desert tribes and Malerre's people). It has no gates, just a gatehouse - and a handful of soldiers stand guard, armed with spears and fine mail. People here speak a strange dialect, though they can make themselves known easily enough.

The layout of the city is remarkable, with concentric circles and straight lines - at the major junctions are shrines: large statues of a forbidding man overlooking a deep pool (into which people drop coins).

Casting forth, Sun is immediately struck by one thing - the man is the Emperor and his presence envelops him; there is no desert and no mountain here.

They wander towards the centre of the city, where a low stone temple sits - with four obelisks at the cardinal points - descending a ramp which ends up underneath these, large crowds of worshippers congregrate there. Through the silent crowd, they hear whispering, and they force their way closer to see an emaciated acolyte (from the Temple of Rania) hanging from a chain coming out of the bottom of the temple (from the obelisk above?). The Oracles whisper guidance for any who are ready to heed them.

Cinder reaches for the acolyte/Oracle - but touches the Emperor, he is snarling but confused, and she can hear his unguarded thoughts: "they worship Me as I defend them from the chaos beyond". Malerre grabs her just as the Emperor grabs her and they flee...


Next session: The Empire
Played by Donogh on Thursday, April 07, 2016