Beloved of the Maelstrom

Cinder, the Mesmerast, wakes to find her companions returned from the Rock. Asleep the young woman looks much like any desert dweller; but awoken, her sharp canines and milky left eye set her apart. On her left cheek and around her milky eye is ritual scarring. One of the first things she caresses as she gets out of bed is an ornate skull-pick in the shape of a cranes head. A divining tool of arcane provenance which she uses to pick out the eyes of the dead for later consultation (including the recently fallen champion Kelle).

Cinder's freakish talents became apparent when her parents brought her to the Temple for an exorcism. The acolytes there embraced her and she trained there, living inside the temple walls with her new family.

She last had sex with an innkeeper named Pharador (from Azul, the Ravine). His everyday sadness appealed to Cinder - he laments the loss of his childhood sweetheart, who married the local blacksmith.

Cinder knows that the Maelstrom loves Ahassunu, an older woman who advises Borbeq and is a cult magnificent. She knows her from casting forth into the Maelstrom and wishes for an audience. 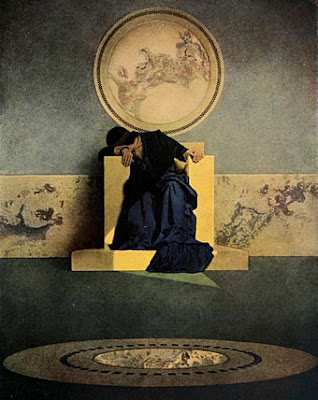 Sun heard talk of Ahassunu from the desert mystics; that she was strong in the way of the desert wind and that the force of the North Wind is behind her. When talking about her with Cinder the next day, Sun reveals that he has no real long-term plan. Only seeking glory. The Cult sent him abroad with no specific goal, just to represent and create stories which lead to more seeking to join them.

Having seen the White-Eyed Fiends up close, Sun and Malerre worry about Cinder; though they know her from before and don't really suspect her of being involved.

Cinder reaches into her jar of decaying (though pickled) eyes and reaches into the Whirlwind for something about Ahassunu - this eye belongs to a cave-bound hermit, who was part of the same collective of mystics who advise local strongholders - a collective who all take insight from the Maelstrom as well.

Into the tavern walks the resplendent Ahassunu, with two of Borbeq's guards. Cinder is abashed and loses her usual poise. She is at Ahassunu's service. The woman grasps Cinder's face, slanting it towards the sunlight which has broken through an open shutters. She wants Cinder to investigate the Fiends and to find out where they come from and what force is behind them. Cinder just wants Ahassunu to be her mentor. Malerre and Sun look to maneuver Ahassunu into hiring them, but she leaves that to Cinder's discretion and leaves.

They they all journey to the Rock to see if Andai will pay them to discover the story behind the threat of the White-Eyed Fiends. Sun pitches that they will hunt down, find out their real purpose and take a few heads as proof. This'll also remove some of the fear Andai's people feel about the Fiends. Andai knows a thing or two about the Whirlwind, it was he chanting a rite of cleansing from the highest tower the night they retook the stronghold from the Fiends. If they fail in their mission, Sun promises personal service to her for a month.

At the pyre of the fallen Fiends, Cinder feels around through the skulls of the dead. She senses a few familiar ones - which feel like home. On closer examination, two have cuts on the cheekbones, like a butcher cut at them, but they're old, and such as might occur with a botched scarring ritual.

Cinder casts forth into the Maelstrom. As usual she sees a dark sky and she stands in front of the Mountain - it's completely behind her, and she cannot see it, but she feels it and feels that it's the source of what remains good in the world.

But the Maelstrom is wrathful - she has abandoned her heritage and she does not know her brethren any longer. Sun appears behind her inside the Maelstrom and is an intense source of warmth alongside her. He assures Cinder that she is not like them.

When they emerge, Malerre stresses with Cinder not to share her vision with the war-band. They're already getting worried about her eye and a connection with the Fiends.

They journey through the desert towards The Temple of Rania - where Cinder was raised and trained. Across the trackless waste it's two days to the oasis of the Dalmori tribe. There are no nomads at the oasis, and that night Cinder attempts to seduce Malerre. In the firelight, Malerre's eye is drawn to Cinder's violation glove - the black, shiny, rigid glove glistens in the darkness as if it's slightly wet. The fingertips are sharp and pointed - this disturbs him more than he's realised before.

She wonders how she can get Malerre to protect her - and she realises that only silver will buy his service. He knows that the way to get her to stay away from him is to threaten her with harm.

Malerre puts an additional two men on guard to watch her the next night, and when he's sure she's asleep, he prowls over to her side. Placing his boot on her gloved arm (which she cradles tenderly in her sleep) and placing a blade to her throat he wakes her up - terrified, Cinder tells him she'll stay away from him in future.

Approaching the Temple, it's wall and tower dominates the small settlement outside. Inside there is a grove of tall trees and a peaceful pool alongside the great tower. Only two guards are visible - they have great helms, heavy spears and intricate tattoos which remind Sun of his own, albeit that they look permanent.

Cinder casts forth to wonder if she is in danger: the Maelstrom is incredulous - she's come home, how could she be in danger here? She is going to lead the Whirlwind into the world. Malerre looks for a way out: getting over the walls should be easy enough, though they'll want to break the gates to get their horses out (indeed, the guards let the entire war-band inside!).

After they've settled in, an old woman welcomes Cinder. Shirat practically raised her and is a true mother to Cinder. She greets Cinder and asks her (almost too formally) if she has returned to them as a friend, and if her companions are also friends. Cinder confirms this and then Shirat's manner becomes open and friendly. She embraces Cinder warmly but takes her face in a manner which reminds Cinder too much of how Ahassunu did the same to her a few days previously.

Asking her about the attack on the Rock by the White-Eyed Fiends, Shirat nods sagely. She tells them of a colony the Temple sent northwards to make a new founding. About twenty went with supplies, tradeable goods and silver but were waylaid by warriors from the Rock. Only one acolyte returned. She thinks, and suggests that those who were unjustly slain in the desert were taken by the Whirlwind to enact vengence on the guilty. She glances at Cinder and tells them that the blind-eye is a sign of a close connection with that primal force.


Next session: Across the Mountains
Played by Donogh on Thursday, March 24, 2016