Not So Slippery After All

Previous Session: Orphans of the Bloodmoon

Their Wicked Mother needs lost spirits  to feed her, so that in time she can reveal herself to Doskvol. Ghostblade, the Whisper, has a target in mind; one that will satisfy her urge to hurt her enemies and serve their God.

The Eels, an upcoming crew of smugglers are trying to break into the spirit trafficking market. The Orphans will intercept and steal their first major shipment, and use that as an opportunity to break the Eels strength and nerve, taking their newly acquired turf while they're at it.

One reason they know and dislike the Eels is that Flint, a spirit trafficker (who used to be a business associate of their good friend Moriya) helped set them up after he broke with her. 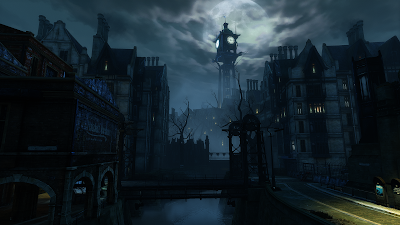 Fancy Frank stalks their route to learn a thing or two about their smuggling routes and practices. They are smart, they run a few gondolas along the route, but at a quiet spot a foot courier disembarks from the first boat with the goods and then gets on a second. The Hound can appreciate their cleverness, but it's designed to avert the suspicions and practices of the Gondoliers and the Bluecoats - it won't work against Orphans!

Congregating along the alleyway, Fancy Frank looks on from the rooftop, his hunting rifle hanging from his shoulder under his longcoat. Monger leans against the alley wall near the far end, his battered tricorn keeping the rain out of his eyes. Around the corner stands Ghostblade, ready to jump into the fray to back him up. Secreted on the other side of the alleyway, up on a set of rickety stairs, lurks Gap.

The courier gets off the boat, but he's with a thug as his wingman - this isn't the usual way. As the pair get closer, Monger pushes himself away from the wall; a civilian mightn't take notice, but everyone with eyes on the scene knows exactly that the Cutter means to intercept the pair. The thug grunts something to the courier and the small man clutches the bag and turns back the other way. But something about this thug's manner catches Monger's eye and he curses to himself as he recognises the cold killer in front of him as Mercy.

Rising into action, Gap lopes down the stairs to intercept the courier as he tries to get away. Unfortunately as he leaps down to land in front of him, the Lurk trips on an unseen obstacle and crashes into some wrecked crates behind, twisting his ankle.

From above, Fancy Frank readies his longrifle, tracking the courier through the sights, and as he turns around, The Hound takes aim centre mass, but as he fires the courier lifts the bag up to his chest and the round goes through it and then through the courier. The bag splits and nine spirit bottles fall out as the courier's body hits the ground.

Monger pulls out his hefty cleaver as he squares off with Mercy; she draws her favoured short sword. Ghostblade steps around the corner with a knife and Mercy's eyes flick to the Whisper for a split second. Mercy makes a low cut, the start of a well-honed sequence which has won fights for her in the past; but she must've forgotten that Monger has seen it in practice too many times. He steps in, using his reinforced leg armour to take the blow and then cuts her with the cleaver. She's mortally wounded and slumps to the ground. Ghostblade eyes her up greedily, drawing a spirit hook from her cloak, using it to entrap Mercy's soul as Monger delivers his coup-de-grace.

As Gap hobbles around to gather up the spirit bottles a new figure arrives at that side of the alleyway. The tall man is dressed in expensive clothing, but not in the style of a noble or rich merchant. Gap hesitates in reaching for the bottle closest to the new arrival, but the stranger's heavy boot hovers over it and the Lurk feels a chill as he contemplates getting his fingers crushed. He contents himself with putting eight into the box and scurrying away.

As Monger cleans his blade, Ghostblade nods behind him as two more Eels come round the corner. They're armed, but obviously surprised to find two of their fellow Eels gutted on the cobblestones. Monger leaps into action driving the two back to the end of the alleyway with his furious attack. Ghostblade yells that there are two more coming from the other side and as they go for Monger's exposed back, Fancy Frank draws a bead on the closest one, his round whistling past Ghostblade's ear and smashing through the unfortunate's head. Despite taking a knife in the ribs, Monger finishes off the three remaining Eels with startling savagery - he is not to be trifled with.

Leaving the six gang members in pieces in the alleyway, the Orphans slink back to their lair before regrouping to observe the Eel's reaction. The Eels are in disarray, they pull in their newly established contraband dealings and retreat to their base. The Orphans have taken their turf.


Next Session: Midnight Throne
Played by Donogh on Friday, February 26, 2016