in which deals are made, but the Bloody Sessions start to live up to their name.

Vision, the Hocus sends Clarion out with Knuckles (an old-timer), Egger and Soss (two new recruits in cowls and with hacked hair), and co-opts Charlie, the Battlebabe into his plan. The trip down is awkward for Charlie, caught between Sheila & Duke on one side and Clarion on the other.

When they get to Gusher they notice that security is a bit tighter and the general attitude much stricter. Charlie pulls the van into a space around the marketplace; opening up the back doors to display the distilling gear and mobile generator he's selling for Vision's hold.

Colonel arrives (they wonder if he'll spot the flowery green van), and then Parsons (with an impressive dozen vehicles. One of Parsons' crews, the Flaming Hand find Charlie's batch interesting. Smilz (in her shiny jacket and with an actual genuine smile) pushes a hard deal on the generator and a future supply of gear, but isn't so sure of Vision's reliability. Chaplain, the Gunlugger is wandering by and vouches for the deal, though when Charlie realises what that means (if they don't deliver) gives him pause - he agrees when he thinks about going back to Vision empty-handed. 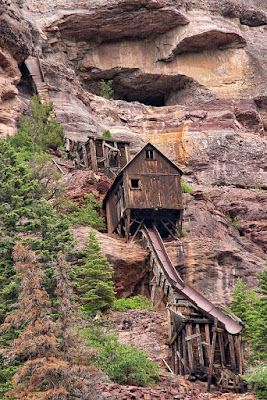 Charlie's worst fears come true, when Colonel suddenly recognises the van. He and his soldiers start arming up to attack the owners of the van but Chaplain spots them getting ready with a practised eye. He wanders over to them, the soldiers, but Colonel is the least well armed and most vulnerable. Chaplain talks them down off the ledge, they're not going to start a fight right here, right now.

The two almost-victims, Silky and Junior have done a quick and quiet exit into a nearby bar. Charlie goes to talk to them, he hates to bother them, but he needs to find out a little bit more, but when they see the Battlebabe walk in with her guns, they run. Charlie gives chase, and when end up in the alley out the back he pulls his pistol and yells at them to stop! But Parcher's guards pick up on the commotion and intervene, he shoots at Silky but misses and kills one of the guards instead.

The heavies start chasing Charlie now and the bells are ringing out!

Charlie makes for the gate, but they spot him (mostly by dint of his fucking white hat!) and he detours for the wall, but crossing the wire means he has to leave his hat and duster coat behind.

Smilz comes back to complete the deal, but no one knows where Charlie is - he'll come back tomorrow.

Charlie gets out through the sludge along the causeways and gets to the roadway out of sight of Gusher. He avoids the Oil Vipers who hunt the marsh at night.


Parcher comes over to the parking zone looking for Charlie. The two guys have been caught - they're roughed up and nearly naked. Chaplain can't get Colonel to admit he was going to just kill the guys yesterday, but they admit that they bought the van from a 'Moonbeam' just last week just outside Leafy Hollow. They give a vague description (one of them had an orange top), but Chaplain suspects that they're describing Eggers and Soss (their shorn hairstyle sure suggests a quick change of apperance to him).

Search parties are sent out to Clarion and her lot. Sheila tells them that Clario looks for the biggest sucker in town the first night - to fuck him and bring him into the cult by morning.


Charlie makes his way out, but it's really difficult by foot. So he keeps a look out to waylay a traveler with a car, he gets to the crossroads when he has to choose between heading northwards to Parsons' area or south to Gusher's Gate. He tries to hijack a car, but it accelerates to go right through him, he grabs onto the bull-bars as he runs him over and is thrown clear as the car crashes into a rock trying to shake him off.

Chaplain is on the hunt for Vision (really for Eggers and Soss). Parcher insists that he leaves his gun behind, given he's on semi-official business, and Chaplain entrusts it to one of Parcher's lieutenants (who knows he'll reap some amount of trouble if anything should happen to it). He finally ends up in a SíBín down a twisting warren of alleyways. The old crone who runs it, tells her to look up Reg, definitely the easiest mark in Parcher's crew.

Rex's bunkmate tells them that he's taken then to the main rooftop inside Parcher's compound and they find them all underneath the main tank of the water-filtration plant. Chaplain isn't the least bit surprised when the badly beaten Silky and Junior identify Eggers and Soss as the guys who sold them the van - others are less convinced, guys who are beaten that badly will sell out the first people they think they can get away with.


Charlie clears his head from his collision with the edge of the road. Three doors open in the car, and impossibly tall moon-dark shiny things step out. They have jet-black leathery skin. There's nothing else to it, they're monsters. One of them raises a large bulbous phosphorescent gun and lights up Charlie as he runs. He shoots back and then the mini-guns open fire.

Charlie ain't got time to bleed and they chase him across the rocky terrain. He hears their guttural cries behind him, and he's about ready to give up and pick somewhere to die when the sun comes up. They quit the chase and he reaches the river near Tri-Hold.


Chaplain has a breakfast meeting with Parcher - she's busy coordinating the hunt for Charlie (Dune is planning the whole thing for her). Chaplain agrees with her when she reminds him of the law around her - firing a gun and killing her guards is well-beyond a disagreement. If it comes to that, Chaplain will help bring Charlie in.

Gruff shows up for Chaplain with news from Tran. Someone has been flashing luxe gear around again, so Chaplain musters the rest of his gang and rides out on a cheaply acquired flat-bed truck.