The fleet jumps into orbit around the gas giant Andromache, where a moon rich with Tylium) orbits nearby. Petty Officer McClaren spots a derelict freighter floating around the moon. There's no sign of life, but the alert is raised and a mission is put together. Deadlock, the CAG, will lead it in person. Boxcar'll fly a Raptor across with a squad of marines, and they'll be escorted by six Vipers on the way over. 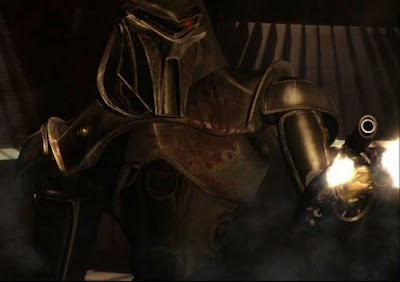 Dr. Meirion holds a roundtable with his students - specifically to discuss the anti-jump effect and whether it was connected with the link between the Basestar and its constituent Cylons. Are the jump calculations based on the same wavelength as the 'hivemind' exhibited by the Cylons?

The abandoned freighter is not quite so abandoned after all. When they shine a light through the frosted windows of the tumbling Sharpsburg, a low-power distress radio sounds out. The pilot, a woman called Max cries for help in a weak voice.

Over the radio, she asked in detail about circumstances and how she came to be here. She tells a tale that her first mate, a man called Kiran went crazy and she beat him to death (she thinks?). After being convinced that they won't be prosecuted for their dodgy history, she admits that they were running weapons to the Gemenon resistance when the Cylons attacked. They were caught by Cylon raiders near Zeus, but jumped here and the damage they sustained mean they've been stranded ever since.

Deadlock makes the call to Stump to come over in another Raptor. Theirs is full to the gills with armour/muscle-bound marines so they need extra space to bring back anyone they rescue or any interesting materiel they find.

Here's Deadlock's plan: Max is going to turn off all the systems aboard the Sharpsburg, they're going to set up an umbilical tunnel and transfer her across after Boxcar sends in a drone to take a look around.

Rhys Meirion takes a leap of faith, he ignores interruptions from his students. He really wants to see this woman up close; to see if his suspicions ring true.

They bring Max off, who jumps across in her spacesuit to Stump's Raptor to head back to the Valkyrie. Boxcar sends in the drone into the Sharpsburg, and quickly it finds Kiran's body and then they find signs of long habitation up in the cockpit.

The marines go across to do a more complete sweep, examining some things the drone couldn't get into. Foster opens a cubby hole near engineering and is eviscerated by a Cylon centurion.

Deadlock and the rest of the marines hear the scream over the mic before it's cut off. The next thing Boxcar sees is a Cylon jumping across through the umbilical over to her Raptor, colliding with her co-pilot who's standing at the doorway. She spins the Raptor to get rid of it and it spins out into the darkness, but in the confusion it lets rip a dozen shots from it's chain-gun and it knocks out the main comms transmitter, and Boxcar doesn't notice as she tries to get the Raptor back under control.

Deadlock is in danger of being cut off from escape, as McBain, the squad corporal take a faceful of lead from a Cylon, but between his last breath and Deadlock they empty their guns into the centurion and put it down. Deadlock tries to rally his marines, but Atlanta gets skewered by the remaining Cylons claw. Deadlock and Swift finish it off.

These are not their parents' centurions. They're sleeker, more powerful and still yet more nimble. 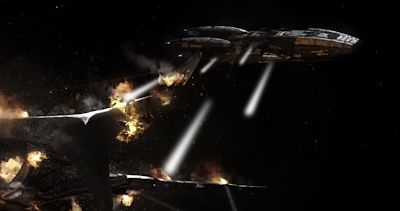 Back over at the Valkyrie, Max is coming aboard, Stump and his co-pilot checked her out and reckoned she was ok.

Meirion wonders if it's possible to place relics locally to detect Cylons aboard the Valkyrie, and he goes to Behari, but she doesn't listen.

Marcus heads down to the hangar, and notices that Max is identical to Tara, but with dark hair. Meirion is checking the records and recognises the similarity as well.

Across at the Sharpsburg, getting back aboard the Raptor, Deadlock notices that the radio is out and that the patrolling Vipers are out of short-range comms.

Marcus talks to the freaking-out Meirion and together they warn the marines on deck to keep an eye on her - Marcus fingers a concealed firearm as they survey her crossing the hangar deck. They put in a call to Tara's room, where Fernando tells them that she's headed down with Charlie to help out in the engine room. They put in a priority call with the duty officer down there to arrest Tara immediately.

As Boxcar approaches the Valkyrie to land, the power cuts out through the Battlestar, and she waves-off to try again.

In sickbay, watching Max carefully, Marcus strikes, stabbing her in the throat with a screwdriver.

In jumps a Cylon Basestar.

Meirion heads down towards Engineering via Causeway B with a couple of marines, without power it's a challenge to get through the ship. These doors need to be opened manually, and inside they find dead engineers. Tara is inside with the chief engineer, she has a sidearm to his head and opens fire on them.

Outside, Boxcar is one of the few Raptors out there and Behari makes the decision to launch her last two remaining nukes at the Basestar; Boxcar'll give them firing solutions and they'll just have to hope the close range does the rest. Behari has to get emergency teams to redirect any residual power from life support to launch Vipers. Otherwise they're a sitting duck, and breathing will be an optional extra anyway.

Tara isn't to be talked down, and with the situation aboard getting grim, the marines open fire on her, grievously wounding her and the chief engineer. Bleeding out, she laughs at Meirion's suggestion of their friendship. Viciously, he kicks her in the head til she's dead.

The rest of the engineering team start to bring everything back online.

Boxcar is guiding the nukes in, but the Vipers are getting torn apart by the Cylon Raiders, but the giant dog-fight is giving Boxcar the cover she needs. The nukes hit the Basestar, destroying one arm and damaging another; and it goes defensive.

Deadlock organises a scratch squadron of Vipers to attack the circling raiders from his co-pilot seat next to Boxcar, but it's almost meaningless.

The engineering team, urged on to even greater effort, makes a mistake and power is surging irregularly.

Back up on the bridge, McClaren notices an anomaly in comms and isn't convinced by Meirion's excuses as to what he was doing at the station. Burns doesn't buy it either and orders him put in the brig!

Another wave of Cylon raiders overwhelm the remaining group of Vipers and then they send in a handful heavy raiders - a few dozen Cylon Centurions board the Battlestar.

Looking on, Deadlock pulls his gun on Boxcar and tells her to approach the Basestar - they must find a way to stop it. Swift backs him up, but she's not sure about all this. They fly inside the Basestar, past glowing cinders and floating centurions, and then further inside past scores of stacked raiders.

Manoeuvring carefully to a central steel column, they land softly, seeing a human enter a hatchway. They follow, sick to their stomach, and Boxcar lifts out a jury-rigged bomb. As they approach the hatchway, Meirion steps out.

He tries to talk them down - it's him, but that's impossible. Deadlock just shoots him. Swift follows up inside and opens fire on a handful of 'skinjobs'.

They don't have a remote detonator and there are Cylon Centurions coming. Deadlock tries to lay some Cylon guilt on Boxcar (her dad is a Cylon!) but she's not budging. Deflated, Deadlock gives them time to escape and sets the bomb.

With a destroyed Basestar behind then, Boxcar and Swift take the Raptor out to see the human fleet being torn apart.