All the Devils are here!

Lucia (Bruja the Doomed) spots the Wyrm of Ages lurking; she doesn't recognise the SuperVillain, but knows she's up to no good. She is still concentrating on ruining Brad Armstrong's day, so she spies the IT professional taking care of the laptop/powerpoint for his big presentation, and reckons that the best way of clearing the place of all these 'innocent' people is to pull the fire alarm.

She realises that Julie is still upset with her, and tries to comfort her; telling her that she's her oldest friend and she's so glad she moved to Halcyon City and they can hang out again. Julie fumes. Does Lucia really think that she moved here for a job! Julie grabs her stuff and storms out. 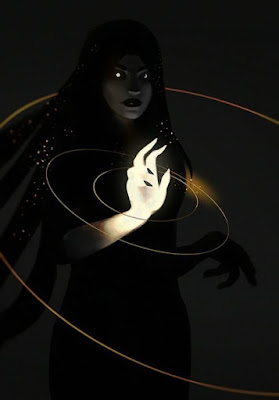 Gus (Tag the Innocent) spots the Beast when he heads out to the toilet. The SuperHero is nursing a large whiskey at the main hotel bar. Gus sits down next to him, pretending to be a fan who just recognised him. The Beast plays it up, and scoffs when Gus raises the Wyrm's name. He can take her, and he will if they cross paths again!

He arrives back to the others and they swap notes. A lot of bad-ass Supers around!

Simon (Shadow the Beacon) points Lynette in the direction of the Wyrm of Ages - it might be good for her career to get a few photos of her (even if it's just on her smartphone) before things kick off!

They admit that Lucia was right all along, about Brad Armstrong and his danger to the entire city! She's not too insufferable in her self-congratulatory exultation...
She pushes her luck with Betty (K-0S, a friendly SuperVillain) asking her to help her out with Armstrong's laptop, but Betty isn't too keen on it (the odds of it seeing a payoff are pretty low in her mind) and rounds on Lucia. Suggesting in pointed tones, that she should worry about Julie. She's a fool if she doesn't know what's going on with her.

Barbarossa is leaving with Roux, his handler, and before he can get to the car, Javi (El Serpiente the Nova) distracts the valet, Gus retrieves the car with lightning speed for Simon to drive up outside. They talk for a while, directing him to take them back to the airport...

Lucia burns with frustration, and walks out to the hotel bar. She spots The Beast - he's a handsome devil. Their rapport is pretty instantaneous and when she suggests that they go somewhere a little more private, he suggests his room upstairs and off to the lifts they head.

When the others come out, they want to make sure that they can arrange for The Beast's confrontation with The Wyrm of Ages will take place well outside the hotel. But he's gone. They ask the barman where he went, and he bro-tales them with The Beast's pickup and they recognize Lucia from the description (they give him a stern look when he describes Lucia as 'hot'). Lucia has no idea who he is!

In Room 515 above, we fade to black as Lucia and The Beast don't even make it to the bed.


Simon is driving Barbarossa and Estelle Roux to the airport, but the way Barbarossa is acting he knows that Barbarossa is going to kill Roux and then drive himself south to meet up with the Red Queen (which would also leave him shit-out-of-luck). He looks at Barbarossa in the mirror and calls him out - that he doesn't believe he's on the level and then he crashes the car into the side of the road to confront him directly.

Tag zooms to the scene to help Simon, but will he get there in time? It should be easy to find the wrecked car...

Barbarossa drags Simon out of the car and glances back at Roux, scrabbling away from him in the back seat - she'll keep til he's finished with this foolish boy. He's about to throw Simon into the traffic when Tag whizzes by to grab Roux and bring her to safety.

That momentary distraction is all it takes for Simon to gain an advantage, and fight back. They exchange a flurry of blows, but Barbarossa still has him in his grip.

Roux exclaims to Tag that his friend messed this up royally. That she had the situation under control. But it's obvious to Tag that she didn't.

Lucia brings out her teeth and claws to rake The Beast, it's very messy and he responds angrily, flinging her across the room and his own teeth and claws are like a tiger's. Javi charges upstairs, with Betty in tow to intervene.


Barbarossa tells Simon that he should look at AEGIS, some there is just as responsible for this as they are. He smashes Simon with a fist, bringing tremendous power to bear on him. Tag zooms in to push Barbarossa away from Simon, trapping the villain along with himself inside a swirling psychedelic vortex.

In the eye of the storm, Barbarossa tells Tag that he can be a part of this again. He can put in a good word with the Red Queen for Tag. She'll welcome him back into the fold!

After a moment's thought, Tag whisks him off down the road, well away from the scene and sets Barbarossa free! Warning him that he'd better keep his side of the deal.

Javi bursts through the door, whipping up a reality storm in his fury and the onslaught drives The Beast back. The SuperHero transforms back into his full human form and raises his hands in surrender. Like he's not a threat to anyone. Betty transforms into her K-0S form behind Javi, lighting up the hallway in harsh blue light.

Lucia angrily turns on Javi, and demands that he leaves, that this is none of his business! Confused, Javi turns around, claiming that it's Gus' fault. Lucia snarks at K-0S too, who isn't impressed by her cutting remark. K-0S tases the Beast where he kneels and Lucia snaps, all the furniture in the room jars into the air and a bedside locker hits K-0S.

K-0S tases Lucia too, and then Lucia loses control of her powers. The vitality absorption that kept her unharmed when she was tussling with The Beast goes out of control and sucks every last ounce of life out of him where he lies immobile on the floor. His joints pop out and he starts to shrivel up.


Back at the car, Roux thanks Simon, but won't tell him exactly what she knows about any AEGIS involvement in this. Though he does learn that the delivery of OBSIDIAN has occurred already - Barbarossa has it. They need to hunt him down before he can return to the Red Queen.

Javi stands in horror at the scene in the hotel room. The Beast's dead body is a shock. K-0S' neon blue form flickers out and Betty falls to the floor beside the body, breaking down and crying.

Lucia tries to ignore it all, getting dressed in the corner and leaving. Javi helps stand Betty up, wondering what she's going to do. She's pretty fragile and doesn't know what to do now that The Beast is dead. Some brand of vengeance or justice against him is all she's cared about for a very long time. She'd like for Javi to stop talking to her like she's a villain, and she'd like to get drunk.


Gus heads back to the hotel, not the car. Simon has been phoning him non-stop since he got into the car with Roux. She's heading to the AEGIS offices, but will drop him back to the hotel as well.

Gus meets up with Javi and Betty at the bar, he's surprised at how shaken she looks and finds out about what's just happened upstairs. He tries to get Simon back on the phone, but Simon angrily refuses the call.

Simon arrives back at the hotel too, bumping into Lucia in the hall, who's trying to be inconspicuous. She's catching the tail-end of Armstrong's keynote/impromptu speech to the gathered great and good. Simon tells her that they need to catch Barbarossa quickly, they might be able to get him with evidence to sink Armstrong as well.

Simon bumps into Gus and is livid - or at least WTFing him about where he took Barbarossa! Gus tries to explain his thought process, though it's a bit confused. He's shocked that Barbarossa has OBSIDIAN, he never would've let him go if he knew that! He just reckoned it'd be useful to have someone who owed him inside the Red Queen's coterie.

They all discuss how they can chase down Barbarossa. If they can rely on AEGIS at all, or if he'll already have reached the Red Queen...Lucia is studiously avoiding making eye contact with Betty during this.

Bruja will open a portal to Barbarossa, Gus will speed that way as soon as Betty gives him a fix on her location and then the rest will catch up as best they can.

Bruja appears near the edge of a high bluff outside the city overlooking the river. Barbarossa stands
right in front of her holding a phone. As he regards her, she hears the low throb of motorcycle engines behind her. Seven bike with their RedCaps attached!

Threatened by their presence, she hesitates. Barbarossa grins, telling her she'd better back off or else her family back in Kentucky will never be heard of again, and even Julie will meet a sticky end.
She's shocked that he knows all these details about her life, but swings into action, trapping Barbarossa in a psychic construct she conjures up with surprising speed.

Barbarossa tamps down on the initial shock, he knows he can get out of this. He tells her that unless he gets back to his people about her friend and family, they'll be dead within the hour.

A RedCap steps up behind Bruja and a sawtooth chain is wrapped around her throat and she's ordered to release him. She feels a rising panic as she feels the teeth start to saw through her flesh...

The prickly tingling fear of her doom, always in her head—it holds her back most of the time. But right here, right now? It gives her the confidence to do anything. After all, what’s the worst that could happen? Is it worse than her doom? Do impossible things. Do anything.

Coursing through the chain and back into the RedCap behind her, her power extends into him and his life drains from him in an instant. The ground under him is already arid and dry but starts to crack. As he falls and she's released another one charges her with a wicked looking machete but he drops dead just as the swing moves towards her.

The others die too. One pulls an Uzi and looses the entire clip at her in dawning horror. The rounds decay in mid-air and he's dead too. One has gotten on his bike and gunned it into life. He roars off into the night, but Bruja pushes the power to catch up with him, ignoring the fact that the cone of death envelops a family farmhouse nearby as well.

Barbarossa gets it too. His body has shrunk into a dried husk; but his soul is intact and in her psychic construct.


Next Session: Post-Mortem
Played by Donogh on Thursday, September 20, 2018