Previous Session: An Invitation, or as good as

Simon (Shadow the Beacon) & Javi (El Serpiente the Nova) exchange glances as they stalk the new arrivals who are here to meet with Brad Armstrong. Simon will stay incognito, while Javi will try to speak to the woman who's handling the man Excelsior warned them about. 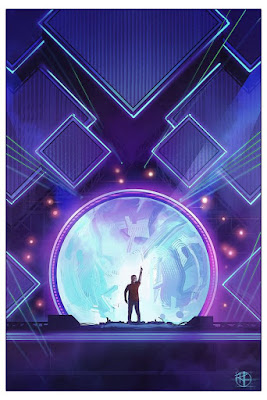 Javi steps in front of her, provoking her with a drink under her nose, asking about her plans with Brad - yes he's that bold! The approach appears to work though, and after she introduces herself as Estelle Roux she admits that she has an appointment with Brad, and then (distractedly) confesses that he did evince some interest in meeting with Javi later on tonight.

She sees her charge through a set of doors which lead to some suites and meeting rooms. Javi is sure that the man, Barbarossa, is a buyer for Project OBSIDIAN.

Brad sees Javi as the young man approaches a knot of sycophants clustered around the billionaire. Brad finishes the discussion (whether Javi was going to give him more than a few seconds, we'll never know) and clasps Javi by the shoulders. He's has his eye on Javi, real talent that needs a bit of moulding and mentorship - if he might be so bold.

Javi is taken in by the charm for a moment, he can see himself fulfilling this vision that Brad has of him. Until he reminds himself what the mission is here tonight. He gleans what he can from the discussion - the close personal attention of the most powerful man in Halcyon City! Brad is planning to take over the entire city, and he wants Javi to be the trailblazer in this new programme of his - all he has to do to take this relationship to the next level is join up...
Brad tells him to call him (handing him a business card with a direct line) and they'll bring him in.

Simon follows Barbarossa to the doors. He waves away a waiter from a trolley, and takes his place.
Guess his tuxedo is plain enough for him to pass as one, and he wait for just the right moment before sneaking through the locked doors.

He scans the meeting rooms all along the corridor, before finding one with quiet voices inside. Simon sneaks into the next room, and stands up against the adjoining wall. Still not good enough to eavesdrop, so he takes out the gadget he took from the dangerous-looking woman hogging the champagne outside earlier.

He presses the button on the 'key-fob' and a sphere of phasing energy appears around him. It extends slightly into the carpeted floor, but more importantly, it goes right through the wall next to him and doesn't appear to be visible to anyone inside that room!

Barbarossa and Brad Armstrong are sitting on comfortable chair around a large coffee table. Estelle Roux is leaning against a sofa - she's not part of the discussion, but is obviously paying attention. Barbarossa is delivering OBSIDIAN to the Red Queen, for an undisclosed price, and it's happening soon.

Simon is shocked, even knowing everything he does about Brad Armstrong, that the deal is on the level. Still phased inside the Orb, he walks out the doorway. But sees Viper, the woman he stole the device from walking down the hallway looking at her smartphone intently. He has only a moment to decide and goes out the wall rather than retreat back into the meeting room...

Javi heads back to Anita, where he finds her talking animatedly with Lynette. Conversation turns to how dangerous things are for the team when they confront super-villains and Anita wishes that he could tone it down a little, but he pushes back on the idea - despite working in a green grocer he si a bit of a freak, transforming his hands into snakes to prove the point! Anita's still cool with that, or at least they're still cool with each other...

Simon steps through the wall, to find nothing under his feet. There's a steep cliff face plunging down into the river far below! He turns back as quickly as he can, releasing the device and grabbing onto the rocks for dear life. He narrowly avoids falling and he imagines he hears the fob tumble down the cliff-face and into the water.

He scoots over to a nearby balcony and catches his breath in relief.

Viper is waiting for him, calm as you like. She holds out a hand, obviously expecting the key-fob to be handed over. Simon wimpers (he's pretty sure that she's a villain who's going to cut him up for breakfast).

She wants his name and he puffs himself up
-I'm Shadow. Unhand me!
She scowls, but she knows who he is and has his number. She waves him off and climbs up onto the balustrade and dives off into the river far below.

Simon can't resist checking out the dive - it's pretty impressive!

When he returns to the group at the main party, Lynette notices his suit is muddy so he tells her the story. Simon tells her he was worried about having a close encounter with a SuperVillain, but she knows about Viper. At the newspaper they use different colour tints for photos of heroes and villains (that's an editorial choice to help readers, obviously).

They get conversation back to more mundane matters, but when wondering how her apartment is doing, Simon lets slip that Javi (El Serpiente) was actually responsible for leveling the floor of her building, and not the RedCaps as the story went before...


Next Session: All the Devils are Here!
Played by Donogh on Thursday, September 06, 2018