Bad to the Bone!

Simon (Shadow the Beacon) settles into his job with the janitorial company serving Halcyon Analytica. When his shift is on, there are still late workers in the office, trying to hit their project deadlines. They all strike him as confidant and smart, but with high ambitions, not just for themselves but for their company too. He hears hushed tones of a new project 'OBSIDIAN' which is nearing completion and even that the go-live date has been brought forward.

Back at the apartment, Javi (El Serpiente the Nova) and Anita catch up. Things are fine, but she's up to something else without him. He doesn't think it's work, and there doesn't seem to be much else up with her life at the moment. He confronts her about it and she denies anything is going on. But when he pushes a little, she storms out
-I wasn't the one caught...up a tree with someone else! 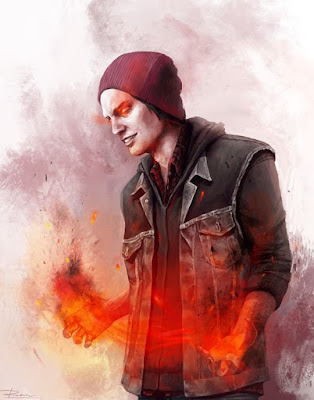 As Simon is finishing up his shift he spots a shredding box that's been left unlocked and when he pokes inside he sees that the bag hasn't been fully emptied. He grabs everything and puts it in his own cart. He'll take a peek later on in a quiet spot. He knows he won't get out of the building with anything significant. There are swipe cards linked to biometric scanners everywhere.

On the way downstairs he passes Brad Armstrong himself, walking and talking with two external consultants. They sound European, but Simon doesn't stick around to listen in - he won't take the risk. The woman is about fifty, and the younger man barely 30 and looks vaguely middle eastern.

El Serpiente has gone outside to clear his head. He's leaping across rooftops, using his elastic snake arms to great effect. On one particular building, he's walking across the retaining wall when he sees a motorbike parked on it, and a red cap wearing tough-guy sitting astride it.

Simon searches the unshredded pages quickly downstairs, and finds what looks like a large microfiche / black overhead transparency in the middle of an otherwise unread printed report. He nabs it and dumps the rest into a recycling bin.

El Serpiente snakes out an attack at the biker's face, but he ducks underneath it and guns the bike into life, hurtling straight at our hero. He goes for the ultra manoeuvre and whips the bike out from under his opponent, throwing it across the rooftop. The biker had already been climbing up on top of the bike and slammed into El Serpiente's face with a flying elbow. The surge of power is beyond his ability to control and the blast smashes the rooftop into smithereens, small boulders cascading down into the apartments in the top floor.

El Serpiente slides back along the retaining wall, until his head is in air above the seven floor drop. The RedCap is still there, floating in air where the building used to be. He looks down into the apartment below and grabs (not so much grabs as uses telekinesis) a young woman from the wreckage. With pure cruelty on his face, he makes to fling her from the building and down to the street below...

Shadow is there. With BlackJack's ray-gun pointed straight at him and he sends a petrifying blast at them. The RedCap falls to the floor and Shadow has to leap into action to save the hapless (now that she's petrified) woman. He leaves her gently down to the floor inside her apartment and tucks a business card into the pocket of her jacket.


**
They hear more motorbike engines incoming, and spot two bikes roaring across the rooftops towards them. One looks like it is riding along the structures, but the other is making no pretense and is just flying!

Shadow grabs the RedCap off his defeated opponent and places it on his head, replacing his own fedora. He gets an instant connection with the motorbike 'Lilian' and it instantly rights itself and flies over to his side.

El Serpiente coils up and flings himself at one of the incoming RedCaps, but he's booted away and then dragged behind him for a while before being flung against the wall. The RedCap regards him with pity
-You're not cool enough for this crew kid

A faint buzzing is heard and an alien bubble craft appears above, it's Xerox! She's back!

Xerox the Outsider is an alien being.
She's from an energy alien collective who share their emotional experiences. They build bio-organic
suits to interact with the physical world, in order to gain experience as individuals.
Her collective wants her to return home to share her own experiences, to add to their pool of wisdom.
She loves the team because they're all glorious, unique individuals!

When they worked together first as a team against Catcher, she saw that they were all disjointed and had no synergy. She used her telepathic powers to connect and coordinate the team - that's how they came to trust each other.

She's been learning about the Earth by spending time with Javi / El Serpiente.
She has a crush on Lucia / Bruja, but keeps it under wraps.

Xerox drains a lot of lifeforce out of the other RedCap and he collapses, crashing the motorbike into the building. When she turns her attention to the one who's riding straight towards Shadow, he raises up a wall of rubble against her forcing her craft to gain altitude to draw a bead on him again.

Shadow zaps him though, and takes the cap right off his head as he drives by. The motorbike wobbles but keeps going, swooping down to the road level and roaring off into the distance.

They've won this fight, but they hear other similar motorbike sounds in the distance and then they see the fast reaction team from AEGIS springing into action. They make themselves scarce, no sense in attracting attention from them as well.

Shadow puts on the new cap, and makes a strong connection to the owner and beyond. But is hit hard by something and passes out with a strong smell of brimstone in his brain.

Xerox tries it, she can turn most human technology to her will with her alien abilities. She infuses it with her energy, ignoring the pain, and identifying the the bike 'Lucille' is still being controlled by her rider. That's why Shadow got hit.

She follows him back to his destination, outside the city. He and another six riders are gathered
before their commander, the Red Queen. She's angry with their failure, and the capture of some of their brothers.

And then she notices Xerox, who tries to bat her attention away. But the Red Queen's power is great and she overwhelms Xerox's defences, leaving her insecure and afraid.

They're back at Hank's arcade and Shadow has some luck in comforting Xerox, she's so brave. But now shes' a little afraid of humans, even her team-mates.


Next Session: Believers
Played by Donogh on Thursday, July 26, 2018