Previous session: A Crisis of Faith

They wonder if they can somehow subvert Shirat's plan - before they connect with the Emperor's mind they can betray the acolytes' intentions so that he can protect himself in the month's time is will probably take them to connect fully with him.

As they consider the practicalities, mystical and political, they see an approaching column of cavalry coming across the desert. It's Juk and his fifty-strong warband. 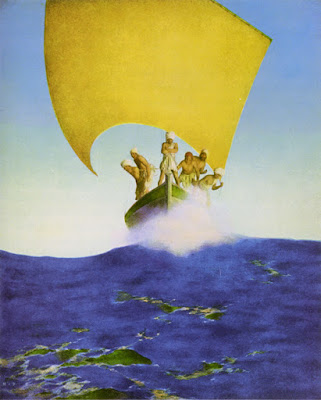 They array themselves in a broad crescent around the eastern part of the Temple (where the holding is) and they bring a dozen of the villagers out of the houses as hostage. They kneel in front of Juk and swords are placed at their necks.

Sun and Cinder go out to parlay with Juk - and as she approaches the line, Cinder spots her parents kneeling right in front of him. She plays it cool, and wonders what Juk wants.

It's very simple, he replies - bring out Malerre and he will release all of the hostages immediately.
Sun appraises the situation; the best reason for them to betray Malerre is Shirat - Malerre is truly the only one committed to pursuing the Emperor's interests here. But they should be on the lookout for a small band of Juk's warband around the back (they could've easily snuck around as the column of horses with flying banners trotted up to the hold). Inside, Sun knows that Malerre is at Shirat's mercy (he'll have dispatched his warriors to the wall's defence, but Shirat always retains two of her bodyguards).

Juk yells out to the men he recognises around the walls of the Temple. He calls on their common sense to turn on Malerre and join his growing warband.

Jasner, poking his head above the parapet at the sound of Juk's familiar voice, is startled. He didn't expect to see his old commander again. Juk deserves to die, but Jasner reins in his thirst for vengeance though and bides his time.

Malerre organises the defence. He notices that Juk's offer has affected a few of his warriors, and splits them up to avoid any dissent from gaining momentum. He's suddenly wary of Shirat, she reckons that he is surplus to requirements, and he's very vulnerable to her bodyguards. Malerre kneels before her and is inducted into the Temple; he must kill the Emperor to prove his loyalty.

Outside, despite his misgivings, Juk allows Cinder to bless the villagers. She steps slowly along the line, anointing each of them with a sweet-smelling salve - the crown of peace, uttering a holy benediction to them individually. She steps back and with Juk looking on impatiently, she pulls out a small statue of a screaming woman - she brushes her lips across the head of the object of radiant misery and whispers her cruel incantation. The statue comes to life, rising up into the air above her head and exploding in a ruthless psychic assault.

Horses up and down the line collapse in screaming agony, and their riders are similarly afflicted. Some survive but are grievously wounded. Those at either end of the line recoil in horror. A few of Malerre's warriors on the wall (including Jasner) are also slain, as are a handful of villagers who were hiding in their houses.

Sun however is mysteriously affected, keeling over unconscious and bleeding.

Cinder stands triumphant, but a couple of Juk's surviving riders charge at her. She flees into the village, turning a corner and pressing herself against the rough wall in an attempt to hide. One turns the corner and as he lurches back to swing his axe at her, she clasps his face with her violation glove and forces him to attack the other one. As he refuses, she crushes his mind and tries to intimidate the other into fleeing - but he simply runs her through with his spear and leaves her bleeding in the dust.

Jasner climbs down from the gatehouse and slowly walks over to Juk, where he struggles to free himself from his dead mount. Obviously in pain and probably with a broken leg, the grizzled commander starts to reason with Jasner, but doesn't even get to finish his offer as a crossbow bolt thunks into his head.

Malerre calls out to the surviving men, reversing Juk's recent offer - if they join him and swear allegiance, he will bring them glory and fortune. Of course, they accept!

After the battle, a recovering Cinder grasps outward and forces herself to turn towards the Mountain. She sees the dawnlight slowly light up the land, showing grass and streams and fruit groves everywhere. But then she regards the Mountain and it spews forth liquid ash, which covers the land and turns it into the desert she knows.

This horrifies her and she sits down to convince Jasner to follow her lead - the evils of this Temple must be expunged, Shirat's sway must be destroyed and she will take over and help the Emperor defeat the Mountain.

When they are all ready to leave on their trek across the mountains back into the Empire, they strike. Jasner cut down Shirat, as Sun and Malerre battle the Temple guards. It is over very quickly and Cinder takes control of the surviving acolytes.

In the Empire, Cinder helps the Emperor to survive the acolytes assault as they become new Oracles, and she is central to his power. As chief mystic, wife and mother to the next ruler.

Jasner becomes a marshall, prosecuting a long war against a new foe to the south.

Back in the desert, Malerre and Sun slowly carve out a new duchy, re-establishing the old empire (though under another's aegis).