A Crisis of Faith

Crossing the mountains is much easier the second time; maybe it is that they know what they walk into this time or the fact that they have been well-provisioned and provided with study pack mules by the Emperor's quartermaster.

On the summit, the desert's stark and barren nature is shocking after their months in the Empire. But still, it is home.

Cinder wonders if the Mountain only acts through the Temple's acolytes, or does it have other servants abroad. She wrestles with her conscience and wonders if she can make the trip to seek an audience with Ahassunu. She needs to convince the Temple (but mostly Shirat) that the Mountain is evil - though she knows that some of what the Emperor does is evil too. 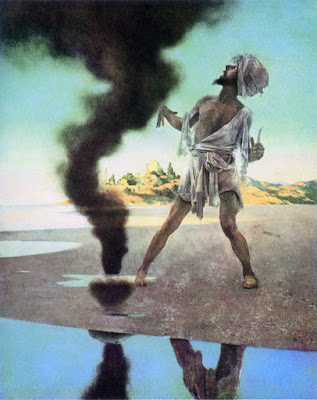 Sun has no such crisis in deciding on his righteous course. Picking a side is easy: the desert is their home, and giving up four acolytes will prevent the terrible destruction the Empire will inflict if they refuse.

They tell Shirat the truth! That the acolytes are conduits for the Emperor and that he needs the Temple to continue to supply him with Oracles. Cinder tries to convince Shirat that they can undo and perhaps subvert the Emperor's plans and bring peace to the Desert if they move the entire Temple across the mountains - but she refuses; she cannot make the trip and insists that this is the Temple's home.

Indeed, she urges them to strike against the abomination that is the Emperor. Any good that the Emperor appears to do across the mountains is only as temptation from the true path. They are soft and blind to the truth. They, as servants of the Temple/the Mountain must destroy the Emperor now that they are aware - she believes that (willing or not) Cinder betrayed the Temple while in the Emperor's presence .

They cannot bring her around to any kind of compromise - she cannot see that the Emperor is necessary or a part of the Mountain's plan.

In the chaos after the Emperor's death, they will be able to spread the Mountain's message throughout the land. In a moment of cunning and mystical insight, Shirat suggests that they can send four chosen acolytes back, and when they are open to the Emperor's mind they will destroy him, either by breaking his sanity or dying themselves - which will surely induce a more calamitous outcome for him than when two Oracles were murdered previously...

Shirat is very compelling.
But afterwards, lying alongside Sun in the dark, Cinder wonders with sudden clarity - what if the next Emperor had the Temple's gift (any progeny from her union with him would surely produce a child with both their talents).