Sun, the Child of Battle, has intricate henna tattoos all over his muscular body, matching the intricate patterns of his weapons. He carries a shining and razor-sharp dagger, a shining and enchanted sword, and a remarkable chained and bladed weapon. He is dark skinned, like most in this region of the world, while his striking face and arresting eyes captivate all who see him.

When he was very young, his parents gave him up to a Cult, who survived on the alms of nearby desert tribes. They taught him to craft his weapons, to mark himself with henna and to wield himself as a Child of Battle. Five years ago, the Cult's leader - known only as Dust - sent him into the world to gather fortune and glory for his Cult, sending even more adherents to join them in the deep desert.

Most recently, Sun stood alone to defend a desert tribe against raiders. He defeated them without slaying more than one - their champion, a man names Kelle, fell under his wickedly sharp blades - and Sun's form and manner impressed the others to surrender or retreat from the fight. A famous song has already been composed on the matter, and Sun's other skills as a bard gained wide recognition.

The man's mother, a Bonepicker named Imsha, harbours a grudge, but cannot bring it to bear, as her tribe have submitted to the Wathi tribe Sun championed that day.

Malerre, the Wolfshead, is a pale northerner, a scion of the Fallen Empire. The young man wears functional clothing (like the rest of the war-band), but his narrow face, calculating eyes and wiry body set him apart from the burly warriors.

He is of an ancient line of nobles, and the war-band are his retinue, although they don't seem to be very happy that they owe him fealty. The warriors are well-armoured, and well-disciplined. Their horses are almost more impressive, being caparisoned and well-groomed.

Previously they were all part of Juk's company, who was Malerre's father's Master of Horse and who raised Malerre in the internecine civil war after the Fall. Juk's desire to use Malerre as a figurehead did not sit well with him but his attempt to wrest control came to naught - Juk's command was unquestioned and his easy trustworthiness stood at odds with Malerre's reputation as a sneak.

Lately, to keep control of his war-band, Malerre was forced to make an example of Etienne, one of his most stalwart supporters (albeit one whose awkward and rude nature made him few friends). Malerre beat him to a pulp after Etienne objected to a new job, and left him to die in the desert.

This perilous job concerned the worrying takeover of Badinah, the Rock, a hilltop fortress at the edge of the desert. On the way there, the rumours abound of how a group of White-Eyed Fiends swept in from the sandy desert, unheralded except by the Song of the Djinn. They slaughtered every last inhabitant of the holding a daring night-time assault. Dismembering the bodies, setting up the torsos on pikes along the walls, using the heads in rituals after gouging out the eyes. Some say that each of them have a clouded and blinded eye, which allows them to see in the dark.

Five local Strongholders have formed a coalition to take it back from them, and the assault is too easy, considering the fearsome reputation of the Fiends, and the strength of the defences. They overwhelm them, killing every one amongst the score in the first attack. 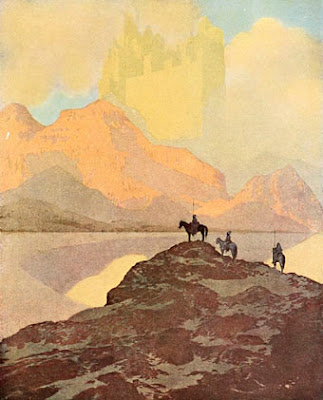 As the few wounded are tended and the warriors take on water, Malerre looks around wondering who'll be taking over the stronghold for good. Andai, a canny leader from Anyel, the Grove, seems to be already positioning her war-band to control it. Several warriors are on the roof-tops with bows, and the others are controlling the oasis below (where everyone's mounts and pack-animals are), the main well and the gates.

Juk has noticed too late and is struggling to organise and gather his soldiers from around the hold. Malerre walks over to Andai who has a few warriors with her next to the well and after swift negotiations, they circle the hold to talk to the other warlords. Simos and Marca are drinking outside the tavern, and they don't seem too bothered - well, Simos gets a purse of silver from Andai, and says he'll be leaving in the morning if that's ok. Marca's surprised, but sits back down and pours them another cup of wine.

Malerre brings his warriors down to the oasis to take control of everything there and send the rest of Andai's warriors up.

Juk's men gather in the courtyard to take control of the gate, but as they square off against Andai's assembled warriors, Sun steps towards him, inviting him to taste his steel. Juk caves in, and walks out the gate to get his horses and leave. There's a brief spat below, as Juk invites any of Malerre's war-band to join the winning side, but they're not having any of it.

That night, the sentries hear a plaintive chanting,but it seems to ease the jitters of all those who have slept fitfully throughout the long darkness. In the morning, Andai tells Malerre and Sun that she doesn't require them for garrison duties, she's expecting a caravan from Anyel in a few days. She would appreciate some scouting or harassing of Juk though.

Malerre and Sun make their way back to Matesh, the Crossroads. They get involved in a drinking/boasting session where Sun's bardic talents win the day. Borbeq, the strongholder is thankful to them for helping to remove the threat of the White-Eyed Fiends from so close to his hold (he didn't have the strength to send any forces himself). Malerre has befriended one of the tavern workers, a young man called Mercury, but mostly with an eye on using him to manipulate Juk if it comes to that.

As the night wears on, a usual topic of dispute between the northerners and the desert people comes up. Most here hold the empire responsible for the misfortune which has befallen the land. They dug up a great evil in their quest for gold and power, and loosed it upon the world when they were driven mad by their greed. Malerre and his war-band retort that the desert is the source of evil and only the strength of the Empire kept it in check.

Next session: Beloved of the Maelstrom
Played by Donogh on Thursday, March 10, 2016