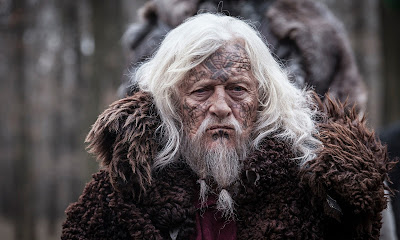 Arngrim the Godi, has a small temple carved into the rock of a ravine in the hills by Fludir. He came from Norway some ten years ago and took ownership of the long-abandoned shrine. It serves all Gods, but he has a special place in his heart for Odin. Rumours abound of his wife and family back in Norway, but no one knows for sure.


Jorund is his trusted ally.

Eoghan has been touched by the Gods.

Askir has grown apart from him.

The Huscarl, Jorund, has served Arngrim for a while now, and they live together in a mean hut near the ravine. He's a native Icelander but feels like he's down on his luck. He seeks a wife and to make a name for himself.


Arngrim gave him a roof over his head.

He would not trust Eoghan Rua with a weapon.

He covets the affection of Ingrid Unnsdottir.

He wants something of Rolf Haraldson.

Eoghan Rua, the Thrall, has been Arngrim's for only a couple of weeks now. Before that the young Irish man was with Snorri the Red, but a legal dispute saw him enter service with the Godi. Snorri stole him from Eire, and his son Snorri the Braggart still has it in for him, but his cousin, Geirny harbours a deep affection for him.


Arngrim is his master.

Jorund is his master's significant other (or so the tales in Snorri's household go).

Steinar the Pale is a slave, still in Snorri's service.

Snorri the Braggart treats him badly. 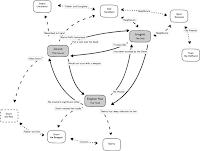 Down the road towards Snorri's farmstead lives Rolf Haraldson and his daughter Ingrid. As happens often enough these days, when Ingrid walks up to bring something for Arngrim (today it's a pail of milk), she chats to Jorund at some length before they head up to the hot springs in the hills above.

Anyway, today before they go up, she remembers that they heard talk that Snorri the Braggart would be bringing a dispute against Jorund for the killing of his father. Jorund is taken aback by this, but doesn't deny it when Arngrim queries the news. Well, after Arngrim made judgement against Snorri the Red for beating his thrall, and took Eoghan from him as a penalty. Jorund went down to claim Eoghan and bring him back. There was a fight, and Snorri was thrown to the ground and Jorund left with Eoghan in tow.

Before Arngrim can confront Eoghan and Jorund to give him the full details of what the hell happened, Ottar, Snorri's cousin arrives at the hut. He brings official news of the lawsuit to Arngrim. Eoghan watches him from the yard. He knows Ottar as a regular visitor to Snorri's place, but not very well. The man is cold and dispassionate, but Eoghan has an inkling that there's something vicious beneath the surface.

Ottar is pushed by Arngrim to say that he will accept his judgement in this matter, but Ottar demures, saying he cannot speak for his cousin. He then puts it to the Godi that if he were to rule in Jorund's favour, everyone would say he did it to protect himself and that would ruin his reputation.

Ottar says that they have two witnesses: Snorri the Red's dying words, spoken to his son Snorri and Snorri the Braggart's youngest daughter Hraeta. Arngrim sets a date for the suit to be heard, next Odin's Day.

When Jorund returns, after he sends Ingrid home. He relates his story of what transpired at Snorri's home that night. It was late evening when he arrived at the main farmhouse. Snorri left him in, but reluctantly, eyeing up the Danish axe Jorund carries.

When he was told what Jorund was here for, he said 'over my dead body' or something like that and attacked him with an axe. Jorund struck him down with his war axe and left him bleeding and screaming on the floor.

He grabbed Eoghan and left, closing the door and heading directly home. The sun had set by this time and Jorund neither spoke to anyone nor called at any houses on the way

Eoghan Rua is still suspicious of Arngrim and his pet warrior. He keeps hearing talk of the fates and Odin and half-suspects he's going to be thrown in a bog to appease Arngrim's gods. Nevertheless he tells his tale.

He was working around the house while Snorri's entire family were out fishing. Snorri the Red came home early and he was a little bit drunk but mostly angry that he'd lost the judgement. He took it out on Eoghan with an axe handle and was tearing chunks out of him (Eoghan can just about open his left eye now after the beating) when Jorund arrived at the doorstep.

Snorri backed off to let Jorund into the house, but then hit him as he ducked through the doorway, failing to even draw blood. Jorund responded with his great axe, maybe hitting him more than once, but felling Snorri easily. He grabbed Eoghan and left, who dragged the door shut behind him. Jorund seemed a little dazed from the blow he received from Snorri.

Eoghan doesn't think anyone else was in the room, but does reckon that Snorri could've lived a while anyway after the grievous blows he took.

A couple of days later, Rolf Haraldson arrives at the temple. He's looking for Jorund. He warns the confused huscarl that he'll have to start treating his daughter right. Jorund fails to answer him and looks like a villain. Looking on is Sven the Halfhand, a notable figure, who was just visited Bjorn Einarson over the river. He'll be returning to his home to the north, and word of Jorund's dishonour will surely spread.

Arngrim comes to Jorund's aid and suggests that he return home with Rolf to speak with Ingrid and see if an fitting arrangement can be made. The journey there is quiet and awkward, with Rolf and Jorund barely exchanging a word. The entire family is in the doorway, skulking behind Ingrid to see what happens.

Ingrid gives out to Jorund, saying that he's been oblivious to her hints over the last few weeks. Doesn't he know that they're perfect for each other and will have to settle down soon. Jorund's sheepish enough, but says he'll have to make a little fortune to build a house and make up a bride price worthy of her. He does have a little something squirreled away - a nice silver and amber pendant which will serve as a token in the meantime. She's happy and even gives him a kiss under the eyes of her mother and father!

Email ThisBlogThis!Share to TwitterShare to FacebookShare to Pinterest
Labels: Sagas of the Icelanders