The Crater at the End of the World

in which the end is nigh!

Gabe, the Driver has refitted his ambulance into a veritable tank.

Vision, the Hocus is undertaking a reformation of the cult. Violence is a disease. They have an all-nighter of philosophical and theological debate. Sliver (one of Clarion's favourites) goes for Clarion with a knife when things seem to be settled - she's betrayed everything they stood for! But Vision intervenes and gets stabbed in the guts for his trouble.


Kim is heading back to Gusher with Chaplain, the Gunlugger. They are going to take the hold back and make sure the key people (like LeMieux) are ok. Trans will help to convince the Parcher loyalists at Gusher's Gate that it'll be ok.

Chaplain and Kim are going to make the long walk from there to the main entrance into Gusher. Kim's got a folding ladder and once they scale the gate and take control of it, Gabe will drive down the causeway with Chaplain's gang behind. The traffic jam needs to clear too, so that's a pain in the ass as well.

The scuttlebutt from those getting out of Gusher is that Dune only has 10-12 of her people, everyone else went out hunting for Charlie, the Battlebabe. Behind Chaplain's people are a 7 or 8 of Parcher's people (who Reg wouldn't try to keep in the Gate) armed with machetes and crossbows.

So, with the sun setting Chaplain and Kim head down the causeway. It's a lonely, exposed walk, and they're challenged when they get inside bow-range. 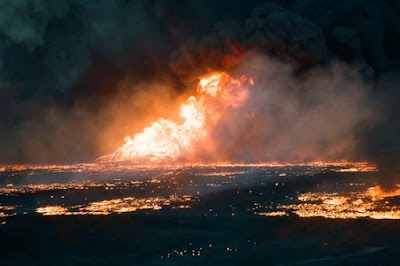 Before he can be challenged twice, Chaplain brings his rifle up and starts shooting at the gate sentries. But one of the hot cartridges spins off the causeway and ignites the oil slick on top of the marsh.

Without a second thought (though with a curse), Chaplain charges the gate and suppresses or kills everyone in the vicinity to give Kim a chance to get the ladder set up. Chaplain clambers over, opening the gate for the others, but it's going to be a very long wait...

He conserves his ammo, but keeps Dune's people away with some controlled bursts. When Parsons' people start to arrive he starts using his grenades. Finally, Gabe arrives with Hard Eight uptop and Ghost in the cab. The mounted machine-gun turns the battle and Chaplain looks back to the rest of his gang humping it, out of breath but arrived.


From outside the hold, they hear impossibly loud screeching as the night lights up. A jet-black flying thing strafes and bombs the causeway. Chaplain runs outside to get everyone under cover inside the gates and then runs to catch up with Gabe's tank.

Parsons has used the opportunity to attack, but they push him back to the main square where his trucks are backed up by an armoured car. Gabe circles them, and Hard Eight lights up everything around them.

Into the centre of the main compound lands the black gull-winged gunship. It's big enough that the armoured car an just drive onto a ramp and inside.
Gabe revs up and smashes through the roadblock Parsons' trucks had constructed and breaks through and is about to ram the gunship's undercarriage when it looses rockets directly at it and Gabe careens out of control.

Chaplain runs underneath the thing as it rotates away, letting loose with everything into its belly - but it has no effect. As the gunship leaves it fires at the refinery, and the entire place starts to burn. They escape from this burning hell, and in the morning they just let the burnt dead walk through Gusher's Gate. 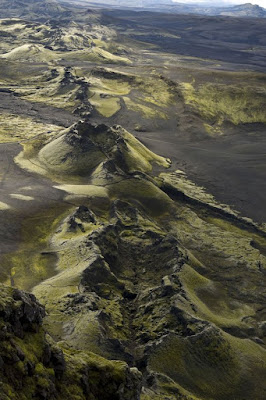 Vision walks to Maersk. He wants to warn Zeke about Bill & Ben and the water contamination. Zeke promises he'll send a message to Gusher about it. It's not a friendly meeting, Zeke has all his trustees with him for it, but it goes off without any trouble.

Back at the crater, he prepares for an augury, trying to get the dead to stop digging. But it's to no avail, and the dead refuse his bidding. They're home. And they tell him that the Others are coming. The fight will be here, at the Mountain. He gets a sudden vision of 7-foot tall black bug-eyed monsters. So he leans in and helps to make their efforts more efficient as best he can.


With more and more dead arriving everyday, they've dug out a huge metallic grey thing. Vision opens his brain, but feels a deep hatred and sees a vision of this giant ship crashing into the Mountain. A door opens, and a dull green light shines from inside it. Gabe and Chaplain explore, and they hit the jackpot, finding organic and metallic weapons which they're sure will be able to harm the Others.


Vision warns them that there are gunships coming in. The dead are raising weapons at them (or the weapons are using them to aim themselves?) but it's far too soon. Chaplain yells at everyone to hug cover until he gives the signal.

The gunships fire missiles from five klicks out, and the carnage amongst the dead is unmatched by anything that they've seen before. When the gunships are a klick out, they start to slag the Mountain itself. Only then does Chaplain stand up and take aim, he's got the biggest and baddest weapon which they recovered from the armoury and he makes it count. Before the others have raised their eyes he's taken out most of the gunships with terrifying accuracy.

The surviving gunships make another pass, but this time the remaining dead put up an effective screening fire, funnelling the gunships into Chaplain's killing zone and he wipes the rest of them out.


In the sudden silence, they realise that the dead have gone back to digging.
Everything they need is down there. The Others will be back in one hundred years.