Shank carefully inches down the steps into the dungeon, the skeleton of an unknown humanoid at the bottom warns him that there is danger below. He temporarily disables the trap on the bottom step waiting until the others pass by him before engaging the mechanism again. If Blackstone's town guard follow them down here he wants to discourage any further pursuit.

They are inside a large chamber, several columns run down the length of it, giving it the feel of somewhere important, but regardless of its original purpose it is now a simple antechamber. The corners are filled with brush and sand, and there's no sign of anyone having been here recently. 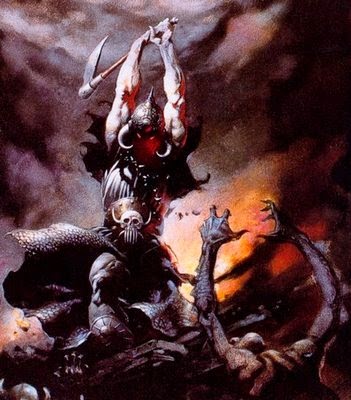 They choose the right hand turn from the room, but quickly hit a snag when they come across a strong portcullis blocked the way around a corner. As Rudiger sizes up the massive iron obstacle, Shank checks it out for any surprises and up in the ceiling he spies a wire running through the stone connecting to the portcullis mechanism. He gently disarms it and stands aside.

Taeros cautions them about opening the portcullis without knowing what's around the corner, and so without warning transforms into a small Owl. Hopping through the gaps in the gate, Taeros peers around a corner, and hearing chittering from beyond the large room she's now in advances until her keen night vision spies a group of Kobolds around a table. Wasting no time she flies back to the others to relate the results of her scouting.

Rudiger takes a firm hold of the portcullis, and trying not to make any noise slowly lifts the gate to allow the others to go under. He allows is to come back to a rest, but as he does Taeros spots that one of the Kobolds is peering down the corridor at him. She quickly jumps into action, hitting the unfortunate Kobold upside the head with her stout staff and sending him flying.

Taeros notices a raised dais with a stone stand holding a small dragon statue. She wraps it up in her pack and when she has time to examine it later, detects a dormant spirit within. 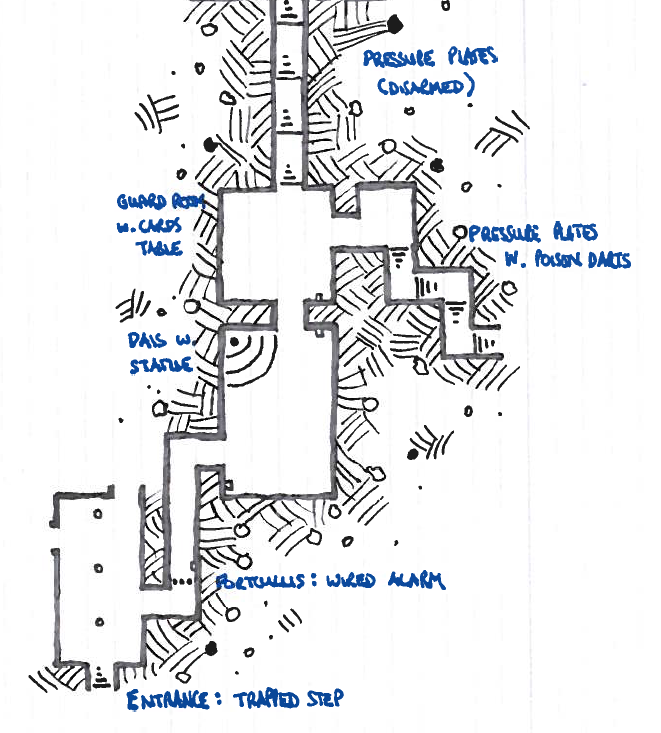 Shank throws a knife across the room, downing a Kobold who's appeared in the doorway. Taking this as a sign of impending battle, Fafnir the Great rushes through the next room and towards the guard room where the Kobolds are just springing to their feet. The first creature coming out of the room uses Fafnir's great size against him though, scurrying under his swinging axe to stick him in the gut with its spear!

Fafnir grits his teeth and powers through, hoping to overwhelm his opponent, but instead ends up with all four remaining Kobolds sticking him with their spears. Rudiger sweeps past him to take some of the heat off Fafnir, chopping one of them in half and splashing the messy gore all over the remaining three. Behind Fafnir, Taeros suddenly transforms into a gigantic mountain bear and barrels past the slumped barbarian. If there were any Kobolds alive when Taeros stopped roaring, they must have run.

Shank is sharp enough to spot that two Kobolds ran, one down a long staircase ahead, the other to the right through a small room and down another set of stairs. Heading around the corner Shank is hit by several small darts as he checks for traps. The darts are so small that he reckons they must be poisoned, but he feels no immediate effect.

They quickly go through the remnants of the Kobolds belonging, finding a few dozen coins, a pack of playing cards and a small two-note whistle. The discarded shells from pistachio nuts are scattered underneath the table.

Heading down the long stairs (where Shank has already disarmed the traps on the landings) the group find themselves in a large ceremonial room of some sort, but there are another half a dozen Kobolds arrayed near the centre of the room by a pillar.

They fight them off (though Fafnir again seems to take the brunt of their damage), but beat a retreat when they hear the Kobold at the rear sounding a few notes on its whistle. They race back to the room with the dais, but instead decide on making camp in the small room adjoining the guardroom (though they notice that the playing cards they left behind are gone). They board up one exit with the table from the guardroom and set watch...

...near dawn the snoozing Rudiger smells sulphur from the staircase, and in bursts an impressive looking draconic figure which fills the room with rancid smoke and lunges at them with its spear!