Out of the Frying Pan...

Chased out of the imperial town of Blackstone and into the desert, our heroes find themselves at a wasted oasis. A slighted well and two hovels are all that remains of the village.

Rudiger scans the horizon behind them with his hard eyes. The Fighter's well-built body and battered helm suggest he's well able for combat. But he judges that the dust cloud a few miles back is being kicked up by at least a dozen men on horseback. He loosens the huge, well-crafted and blood-stained sword in its scabbard and unslings the shield from his mail-clad torso. He glances at his fellow adventurers:

Fafnir owes me his life, whether he admits it or not

I have sworn to protect Taeros

Earlier in the inn Rudiger had been staying in, the town guard arrived to arrest him and Shank (perverting the course of justice or something like that...). Fafnir got in the way (without sword or clothes) and only Rudiger's timely intervention saved his life. Of course, the barbaric oaf blamed Rudiger for not giving him time to collect his mighty sword and mail armour, but such is life...

Fafnir the Giant shifts the axe from one mighty thewed arm to another uncomfortably. His shrouded eyes barely mask the distaste for the scavenged outfit he wears. The Barbarian's body is unmarred by decoration, an unusual affectation for his nation, but the desire for riches and property and for the accompanying mortal pleasures seem barely contained. He eyes up his companions:


Shank is puny and foolish, but amusing to me.

Taeros’ ways are strange and confusing

Rudiger shares my hunger for glory; the earth will tremble at our passing

Shank was being buried alive next to a fire beetle hive for bringing travellers out to a false oasis and taking their money. Who knew the Varloshi Empire took desert travel so seriously? He'd still be there only for...okay, so Rudiger actually rescued him, but Fafnir would've gotten there fairly soon...

Taeros glides alongside the other, her elven features standing out, particularly those haunting eyes. The Druid wears weathered hides and has long braided hair. On closer inspection her eyes are like flecked granite, reminding anyone of the towering mountains far to the south. She considers the travellers she has just joined:

I have showed Rudiger a secret rite of the land

Fafnir has tasted my blood and I theirs, We are bound by it

High in the mountains, and far to the south, Taeros received a vision of a misguided spirit hunting Rudiger. Leaving the clans and crossing the desert, Taeros finally caught up with him. Taeros has shown him a small rite which will keep him safe until Taeros can defeat the spirit and send it back to its realm.
The Barbarian is surprisingly familiar, and Fafnir's family worshipped the same gods as Taeros' clan in their youth - they made a blood bond all those years ago...

Shank's lithe form slips past the others. Barely visible (but definitely criminal) eyes beneath a dark hood. Dark clothes hide many knives, and inside pouches attached to his leather armour lurk mysterious vials. The Thief may have more to lose than most from the chasing posse.

I stole something from Taeros

Rudiger has my back when things go wrong

Fafnir and I have a con running

One vital aspect of Taeros' ritual was lifted by Shank, moments after the elf walked into camp. 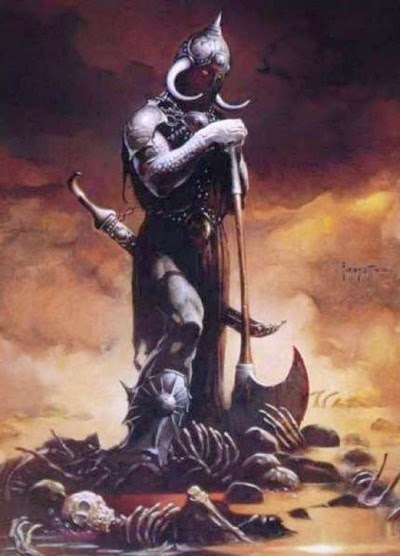 Spotting a stairs going down beyond the well, Shank leads the way down the old and pitted stone steps...
Played by Donogh on Wednesday, March 19, 2014