By the Skin of their Teeth

Grabbing their weapons, Rudiger and Fafnir the Great scramble to their feet to face the creature which has just burst through into their campsite in the small dungeon room. Its wickedly sharp spear flicks out to skewer Rudiger, but The Fighter blocks with his shield and cuts his enemy across the face, dislodging the ornate draconic mask to reveal a older, tougher looking version of the Kobolds they faced the previous day.

Following up on Rudiger's attack, Fafnir slides to one side to distract the grandfather Kobold with his axe and  Rudiger smashes it with another swipe of his sword, shearing the head of its spear clean off.

Now reduced to its claws, the Kobolds turns to flee, smashing a small glass bottle against the floor and enveloping itself in a malodorous smoke. As it goes for the door towards the guard room, Rudiger goes to stop him. Fafnir is in a position to help, but The Barbarian notices that on the stairs behind three Kobolds are about to loose crossbow bolts in their direction. Lunging towards them Fafnir sweep his axe to disarm them, avoiding the a bolt or two and drives them down the stairs. Rudiger manages to ignore the sulphurous smoke to cut down the Kobold, his heavy sword breaking through the heavy scale armour.

They quickly go through the creatures' possessions, finding a purse full of gold and jewels worth at least 1200 coins! Rudiger grabs a remaining smoke grenade; it might come in handy. As he's rummaging around, Rudiger discovered two vestigial wings on the Kobold's back and recalls a gnarled old sergeant in Ducal service relating a tale (discounted at the time) that old Kobolds eventually became dragons...

Taking a second look at Rudiger's sword, Fafnir remarks that it looks like it belongs in an Orc's hand. Rudiger tells him the tale that he took 'Swalfir' from a Dwarven chieftain when clearing the Black Hills of recalcitrant clans for the Duke. 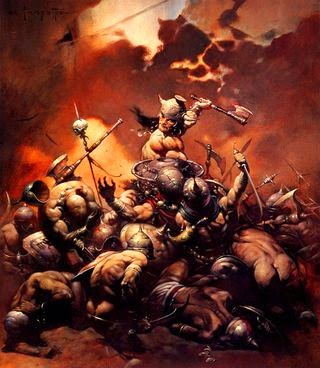 The party descended further into the depths. Fafnir now sporting some second hand draconian armour, decided that beggars (even nouveau riche ones) could use a hand-me-down until they could acquire some proper gear.

Continuing on through the darkness, the party came across a disused portcullis - probably the legendary route to the south!

Taking another route, they came into a chamber containing a deep well, and surrounded by untold hundreds of leathery, strangely coloured eggs. After some discussion, it was deemed prudent to leave the eggs unmolested and continue with the exploration. 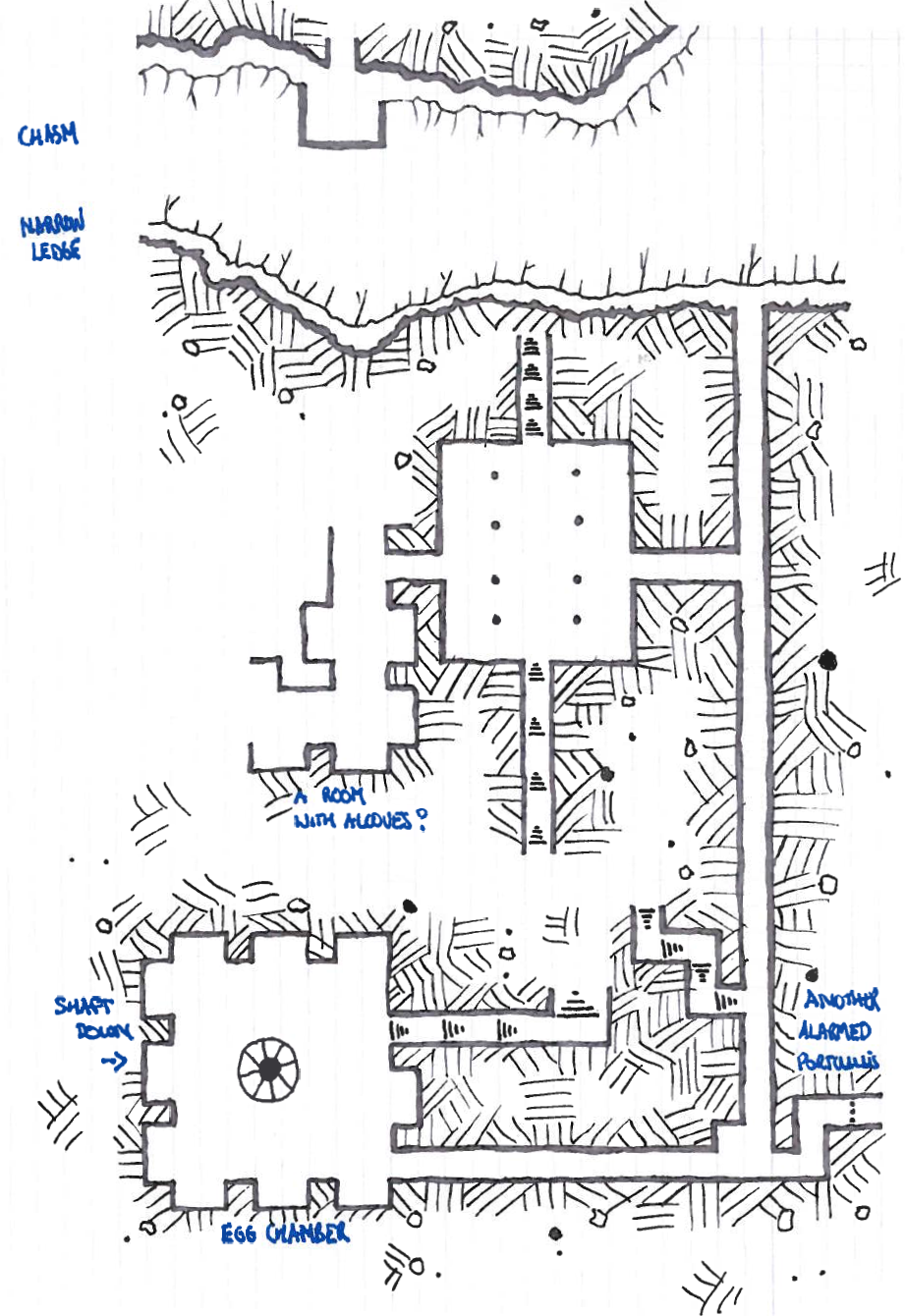 Another large cavern contained what appeared to be a throne, next to another suspiciously deep well. A strange whistling sound emanated from the deeps, and it was only the groups cat-like reflexes saved them as a dirty great dragon hurtled up out of the well! Rudiger and Fafnir scattered, each trusting to luck that the other would survive. As the dragon's fire chased Fafnir down the corridor, his life flashed before his eyes, bringing to mind the ruins of his home in Usterlant, destroyed by Orcs and left to burn. As the last of his line, he hardened his panicked heart and determined to live another day. He dodged aside the fire and gazed out across a huge void, a chasm, rent beneath the world.

Meanwhile, Rudiger skipped out of the Dragon's throne room and into a smaller, adjacent chamber. Surprised kobolds leapt out of their beds, readied their weapons and made for war. Rudiger, knowing well that this was the easier alternative to the dragon, set about his bloody task with vigour.

In time, the dragon, hampered by small passages, went in search of slower prey. The party regrouped, deciding that discretion was the better part of valour, and made to leave.

However, they were not alone. Still suffering from wounds gained in combat, they were reluctant to engage with hordes of angered kobolds, so they decided to try an alternative route home. 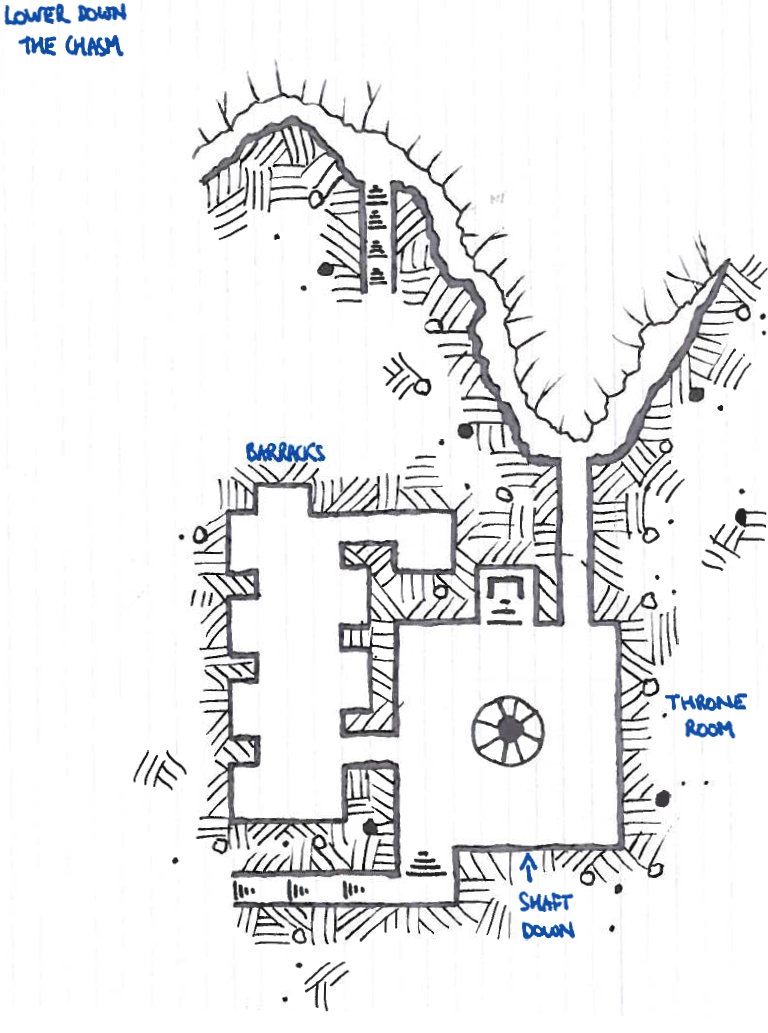 Rudiger managed to lift the rusted portcullis and the party hurried beneath, hoping for a swift exit. A breath of fresh air was marred by the scent of corruption, and as the party cast about a cavern open to the sky, they were set upon by many unknown, foul beasts. The party beat a hasty rear-guard action, scaling the rock wall and escaping to freedom. 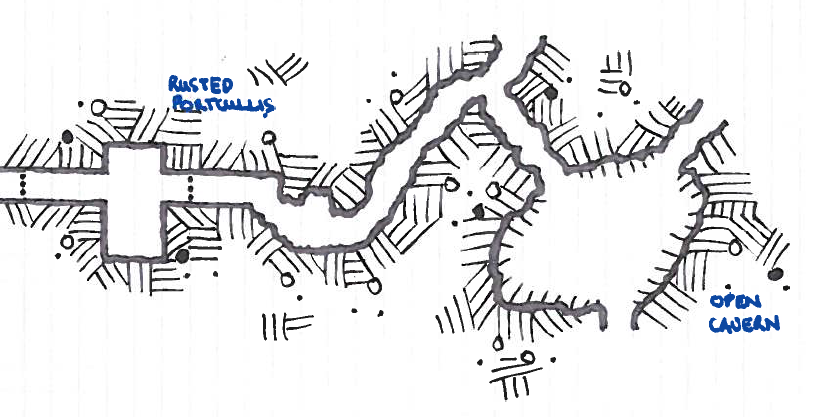 Fortunately, their human pursuers from the village had not the stomach to keep watch for days in the desert, and our heroes were able to leave unmolested.

Once back in civilization, much mead was quaffed, company was negotiated and cash was flashed in the name of looking and feeling like a group of badasses. Now healed and much better equipped, the party needed to plan their next move.

They heard legends of the Ruk Confederation - Orcs - who had destroyed the Dwarven power in the Black Hills, leaving empty their holds. Fafnir also heard that the Varloshi were currently hiring warriors from Usterlant - but would he want to be in someone's pay?

Fafnir and Rudiger finally (over a barrel of ale) came to an understanding, where Fafnir admitted his life's debt to Rudiger: they staggered from the ale house brothers in arms...