Bit in the Ass

In which we are reminded that those who talk about their big plans are looking for disappointment. 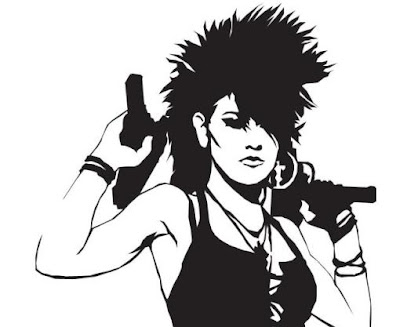 Sweeney takes his crew out in two Hilux trucks - the cargo beds are full of heavy-duty supplies. Four serious machine guns, their tripods, base-plates and a shit-load of ammunition to go with them. They've bought them on spec for Millions, the hardholder of Saltwater, a place way south. They're going to deliver them and set them up for best defence of the mountaintop mine.

The little convoy sets out across the wastes - in the distance they see a roaming pack of Dust Dogs (from whose tusks, Drexler has the nice handles for his many knives) but they avoid them easily enough. They guzzle through petrol and water driving up the terrible road across the wasteland until they come to the mountains. A winding road leads through blasted forest, with signs of many minor rockfalls. They're just a few klicks from Saltwater when they reach a few bigger boulders which have landed recently on the road.

Sweeney and Princy jump down out of the first Hilux to attach a sturdy chain to the main boulder so they can pull it out of the way. Princy is struggling against the tension and shouting back at Shazza when Drexler screams at them to watch out. They look uphill to see a horde of CRs charging down at them. Drexler's MG opens up, chewing up the tree trunks and quite a few of the cannibals, who once they're hit seems to collapse and roll downhill as fast as the ones who are still up on their feet.

It's too few though, and they're amongst the vehicles in no time at all. Drexler and Princy lead the charge with shotguns and eventually the surviving cannibals flee. Even Drexler is too exhausted to give chase. Everyone else is wounded, and Shazza needs urgent medical attention. Sweeney wonders if she'd make it if they went back, but urges the others to clear the road and they'll go onwards to Saltwater.

They pull into Saltwater - the stark hold is a dozen or so container boxes half-buried around a low salt lake. Another few small container boxes sit on to of the ridge. They're welcomed with some concern, with a local doc taking in Shazza and a harried-looking guy called Amber brings them inside to get some grub.

They take some well-earned rest and get to work in the morning - they set up the heavy calibre machine-gun inside the hold to cover the gate and the approach road and set up the smaller ones on top to cover the slope and inside the compound just in case. Drexler gives the local crew a quick run-through each of the weapons along with some quick drills on reloading, switching barrels and cleaning. With Shazza stabilised their spirits are much better. Sweeney grabs Amber and asks where Millions is: he wants to get paid and get home.

-Hello there Sweeney
He turns to get quite the surprise. It's The Harridan standing up top of a container - alongside the locked and loaded .50cal.
-Shit!
-That's quite a welcome for your old flame. Listen, for old times sake, I'll let you and yours walk out of here intact, we'll call it even.
Sweeney looks around as his crew. Somehow, even Drexler doesn't seem up for this one. He nods at her, gets everyone into a truck and they drive away.

At least they drove out with the Hiluxes - Miss Roberta would've had their guts for garters if they'd gone.

A few nights later, Sweeney walks the deck wondering how he can turn his fortunes around, when he sees a glint of light off an incoming boat. He rushes inside to quietly wake Drexler and the other couple of guards on watch. Drexler suggests they play possum, let the pirates come aboard and capture them and their fanboat.

Hiding in some of the empty cabins nearby, they hear as the fanboat is tied up and two pirates quietly clamber aboard. They close the trap, Gnarly and Roark slam into one and subdue him with a few well-intentioned jabs to the face and balls. The other hares off through the decks, with Sweeney wielding his wicked-looking knife chasing after him. Drexler leaps off the Rosa Lee and onto the fanboat before the pirate piloting it can cast off. He goes for a boat hook, but Drexler guts him in a flash. At the other end of the boat, Sweeney sees the other pirate dive into the river and try to make it ashore. He might avoid the shivers if he's lucky...

Drexler drags the surviving pirate into the brig, with Gnarly and Roark glaring at him from the sidelines. Drexler sits him down, only then taking the time to wipe his knife clean of blood. When Sweeney comes in he flashes his eyebrows at him, as if to say -quiet a mess you're in now, huh?

With only a little violence (which Dremmer seems well capable of taking) they drum some answers out of him. The pirates are about 60 strong, and run 11 or 12 fast craft (mostly fanboats) under the leadership of Hammer - a seriously mean fighter who's never backed down from anything. You could try negotiating with hi but as Dremmer says
-you can say anything you want, but it just won't stick
Dremmer however is more amenable to sticking to his deals.

Over the course of the night, they come to an deal with Dremmer they think he'll keep.
He'll arrange a meet between Hammer and Revelation Heights for a week's time on the beach (where the Rosa Lee hove to last time). Once they've iced Hammer, he'll make his bid to take over leadership of the pirates and from then on he'll keep them steered well away from the Rosa Lee.

They shake on it, and let Dremmer go over the side. Now all they've got to do is sell Miss Roberta on it, and find a way to make the hit work for them.

*All illustrations by D. Vincent Baker from the Apocalypse World rulebook
Played by Donogh on Thursday, May 02, 2013