Before Drexler left Moon Creek,  Dolarhyde put some serious jingle on the table for a hunting mission near Jade Falls. There’s a bunch of bandits working the passes up there who’re wreaking havoc on road travel between the two settlements.
Drexler wipes them all out! Those bandits picked on the wrong traveller – he spots their ambush a mile off and take out the main group before getting out of the jeep and following up to give the others some personal attention. Looks like they’re actually working a protection racket out of Jade Falls itself. 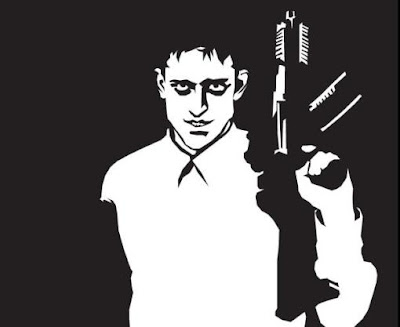 Sweeney has arranged a nice dinner in the back of Sun's place with Impala. But soon the work he's arranged to repair the vital pumps and turbines for Stolo's rice paddies needs his intervention (nothing glamourous, just some back-breaking work). Just as Sweeney is thinking about scraping the mud off himself, Princy wanders down from the marketplace, walking casual (but not too casual) - he overheard someone looking for Sweeney, someone bandying The Harridan's name around. Keeping low for the rest of the day, Sweeney breaks silent mode just to find Impala has fucked off in her boat, tired of waiting for him.

Drexler wonders if he's left himself short on the ammo front, he should've picked up a few extra boxes of links from Dustwich (a renowned hoarder of all manner of bits and pieces back in Moon Creek). He's going to take it easy on the MG for a while, rely on his trust shotgun.

They head up towards Echo Lake - Sweeney reckons that Barnum might know something about Revelation Heights. Barnum is light on useful details. They started to arrive a few months ago, just a few at first, led by a charismatic man named Kray. They bought supplies and that's when Barnum noticed they were building a settlement across the way. They seemed a bit odd, but he had no reason not to trade with them - Lobsterphil is far enough out of the way to cherish what little traffic they get.

Sweeney and Drexler warn him off about the doohickeys - citing their effect on Bar. Their icky description creeps Barnum out and he swears he'll keep them off his island from now on.

They give Revelation Heights a wide berth as they go back downriver. They pick up a buggy from the Rosa Lee and make landfall on a suitable beach. As they drive up towards Revelation Heights, Drexler spots some new structures on the ridgeline overlooking the hold. Looks like they're putting up a chain of watchtowers to cover that approach. The hold itself looks a bit ramshackle but is still well-defended.

They parley a good distance back from the gates, and let the lone sentry who walks out to them know that the Rosa Lee will be a the beach a few miles south for a couple of days for trading. Having seen enough and not wanting to raise any suspicions (or at least violent reactions) they head back. But as they pull into the distance Drexler turns around to glance back at the hold, opening his brain to the psychic maelstrom as he does.

He gets a rush of sensations throughout his body, with flashing lights appearing in his narrowing vision. He sees a monstrous rapacious machine rise out of the stark landscape, consuming the river in fire and destroying every living thing in its path...Drexler snaps out of it as Sweeney hits a pothole on the track.

Later that evening when three full trucks from Revelation Heights arrive at the beach, the Rosa Lee is loaded for bear. Miss Roberta has a strict no-weapons policy at this stop, but hasn't told traders to button-up or anything like that. While the influx of people are searched (with some careful handling by Tum Tum) Drexler runs an eye over the rest of them as they move around. They gamble, whore and buy like normal, but he does notice a high proportion of the jingle being dropped is those doohickeys.

Three or four of their fellows have stayed behind to guard the vehicles. Sweeney grabs Shazza, a key of beer and some cups and makes his way over to them. He flashes his winning smile at them, nudges Shazza to fill a cup
-Thought you guys might appreciate some refreshments while your buddies have all the fun
They warm up a bit, and Barbarossa, the convoy boss trades a few stories with Sweeney. While they're talking, one of the others, a mangy-looking guy starts on Shazza, groping her while she struggles with the valve connection.
As he's pushing her onto the ground, Sweeney comes up behind him. No questions, just a swinging boot into Fido's jaw. Fido goes down, some of his remaining teeth go flying and Sweeney whirls around to deal with the inevitable intervention from his mates.

Just laughter. Barbarossa is doubled over, laughing her hole off, and the other two on the truck beds are giggling manically with her.

Sweeney grabs the keg (defensively? or does he just not like wasting good beer) and ushers Shazza back to her feet and the Rosa Lee. Once he reaches the top deck, they slump into a few seats. Maybe it's just the stress but Sweeney blacks out for a while, with a sense of terrible menace directed at him and when he's woken up he sees a burnt scar on the inside of his arm, just like Bar did.

The rest of the night passes peaceably enough - a few fights on board, but the Rosa Lee pushes off the next morning no worse for wear - Miss Roberta has to call in the traders and buy all the thingamajigs off them. She has a full box of them now in her desk.

*All illustrations by D. Vincent Baker from the Apocalypse World rulebook
Played by Donogh on Wednesday, April 17, 2013