Tai has been working overtime on his projects. With the pointers he got from Fuse, he's been making real progress on the Yokes

He's cracked the rocket launchers too, though it’ll take some real jingle to get them into production.


Miss Roberta has been busy putting together the forces to take on the pirates along with some kind of campaign plan. She loves it when a plan comes together! Carlton has been provided with some road power to clear the route to Jade Falls and he’s mustered a dozen or so toughs in an armoured barge  . She's also been able to talk Impala into doing the scouting for the force on her hovercraft, so much so that you’ve got a fair idea of where they’re holed up. Now all that remains is talking to III up in Raven Square. 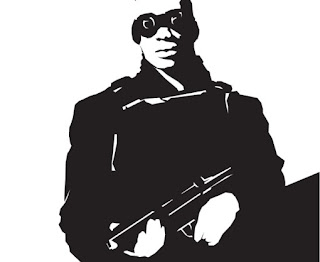 Drexler and Sweeney are sharing a beer after convincing Miss Roberta that there'll be no damage to her reputation or to the Rosa Lee when they follow through on their attack on the meeting between Hammer and Revelation Heights.
Drexler fills in Sweeney on why he gets so bloodcrazed around the CRs. He relates his experiences as a young man when both his brothers were attacked by them outside the compound; they were bitten on their face and bodies and after seeing off the cannibals he had to put them down with the family shotgun.

When asked about The Harridan, Sweeney has trouble explaining how she went from trusted lieutenant to psycho hose beast; but it all started going wrong when he and his old crew did a job in Devil's Hollow, an abandoned hold far to the south. He made a bad call and his best friend Crow was caught and hung up by a slavers protecting their territory. They got split up in the pursuit, and he's been avoiding her ever since.

They head off on on Princy's launch; Mathers' (or is it Morrell?) crew (they're mechanics who operate out of a barge) have run into trouble with some racketeers and Sweeney has said that they'll take care of it. Mathers is doing some work in Summer Meadow (a nice little farming hold on the left bank).

They're fixing up Mathers' barge when Drexler spots Red Tooth McAgin's mob driving into the hold. Mathers appeals for help against the racketeers , but Sweeney errs on the side of caution and backs out, leaving Mathers high and dry. As they power away upriver they also spot a group of 4 or 5 trucks driving into town - a closer look reveals that it's The Harridan (her trucks now have serious machine guns mounted on the back). Summer Meadow's militia raise the hue and cry and arm themselves.
A quick discussion ensues on whether to help them out, but without knowing what the deal is, Sweeney's unwilling to throw his lot in with them. As they reach the Rosa Lee they can make out the column of smoke rising behind them
.

At Raven Square, Miss Roberta invites III aboard the Rosa Lee. The hardholder is a wary old man, and Raven Square is at the upper reaches of the pirates' activity. It takes a good bit of schmoozing to bring him around (with copious amounts of Miss Roberta's finest bourbon, but eventually he agrees to send his son Dutch along with 7 or 8 of his men to help out with the attack.

In advance of Hammer's meeting with Revelation Heights, the group discusses the best plan. They want to keep their hands clean and not take any casualties from a firefight, nor espose themselves to any blame for the incident. They finally decide to set remote charges on the beach where the two groups are likely to parley and cover the area with sniper fire to ensure that Hammer is taken out.

Tai scouts the beach, looking at the texture of the soil, coverage with sand and gravel and any other factors he thinks relevant. He heads back aboard the Rosa Lee and comes up with a daisy-chained set of charges connecting to a larger central one that will cover a large area. Tai attaches small pieces of scrap metal and will top the area with as much gravel as looks reasonable. Contemplating a command wire, but opting for a radio trigger this means that they (Tai and Drexler) can set up across the river.

As soon as it's ready, they land on the beach, taking most of the night emplacing the device. Early in the morning on the day of the parley, Tai and Drexler take up their station on the bank, on dry ground but hidden by reeds. Their buggy is well back and out of sight, but near enough for them to scarper if things get hot. Drexler sets up (Sweeney's) sniper rifle and starts estimating ranges. Tai rechecks the batteries on the transmitter (for the last time, honest). They settle down to wait, trying to ignore the bloodbugs crawling over them.

They hear the familiar sound of fanboats approaching. One pulls up on the beach, while the other zooms onwards and starts a slow patrol. A monstrosity of a man leaps off the boat, he waves the other two back disdaining whatever protection they might offer him. A little while later, the sound of trucks can be heard across the way. They stop out of sight, and a few minutes later four armed men approach the beach. They start talking; despite being virtually unarmed and outnumbered four-to-one Hammer looks like he's commanding that conversation.

Drexler looks at Tai
-I'm taking the shot, trigger the bomb once I've confirmed Hammer's down
Drexler takes the shot, and Hammer drops like a sack of rice, as he's checking to make sure it's good he sees the other pirates move to his aid and the four from Revelation Heights back up as if unsure what to do.
Tai triggers the bomb, and it's like the entire world rocks, dirt and dust and ringing fills their senses. It seems like an age before the two can withdraw to the buggy and drive away.

Back in Stolo, everyone breaks open a few beers - the army has gathered and everyone wants one final fling before attacking the pirate's base.

*All illustrations by D. Vincent Baker from the Apocalypse World rulebook
Played by Donogh on Wednesday, May 15, 2013