Daggers in the Streets

The Orphans are casting around for a good target to build their war-chest - they know they'll need to scale up in order to take on their enemies. They hear tell of a shipment of  payroll silver for the Dagger Isles Consulate and resolve to bushwhack it. The monthly delivery of coins and other materiel is transferred from Gaddoc Rail Station to the Consulate by a couple of wagons through Nightmarket and into Charterhall.

Grace, Monger the Cutter's extortionist friend, is very familiar with this transportation hub and points them towards the carter involved. A old Tycherosi (named Vitter) has just two others helping him with the carts, though the Consulate usually puts a handful of guards with them as well. They've got a gondola ready to go, to take the stolen goods away to their lair. 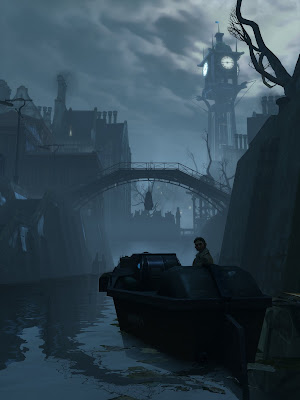 The whole crew are arrayed in ambush positions along the road from Nightmarket when around the corner comes a patrol of Bluecoats. They seem friendly with the convoy and Quess the Spider signals for everyone to withdraw to their fall-back ambush positions.

This secondary ambush site is problematic - the carts go along a narrow pathway along the small canal at the edge of Charterhall. It's closer to the Consulate (so there's the danger of outside interference) and it's a more dangerous route back to their lair.

Their thugs, coming out of nowhere, run behind the convoy and steal something small off the back of the rear cart (unbeknownst to them, they are official Imperial documents) - they scarper across the nearby lock gate and 3 of the 5 guards chase them out of sight.

Quess is on point, and she approaches the convoy from the front; she knows Vitter to see, and opens up a conversation with him, he stops his cart to shake her hand and that's when she standstills him. The others leap into action at this. Fancy Frank the Hound is in the perfect sniping position on top of a building down the canal and kills one of the guards outright, just as she reacts to Quess (who is sure she feels the shot whizzing closely by her ear!).

Monger the Cutter clambers over the cart to take out the second guard, and is shot straight in the chest. He falls to the flatbed of the cart, a couple of his ribs are definitely broken but so glad that he decided to take his heavy armour this morning. He gets back up, with a cruel-looking crowbar and jumps on the guard who's reloading his pistol, horribly skewering the poor guy.

He looks up and sees the three guards who chased their thugs away come back around the corner. Damnation! They didn't keep them engaged for very long!

The guards open fire with their pistols, and Monger uses their fellow guard as a body-shield, diving into the canal to avoid the ensuing carnage! That heavy armour makes him regret the decision as soon as he hits the water...

Fancy Frank has lined up the guards and carefully shoots two of them down, causing the last one to run for his life. Meanwhile Quess has unlooped a whip from the cart she's on and sent it unerringly around Monger's hand, which is the only thing over the water at this stage. She ties her side to the cart and they haul Monger out.

Returning to their lair in the abandoned Leviathan slaughter house, the Orphans do not notice the important Imperial documents and regalia that were in the loot. They have bigger concerns when the pool that the Wicked Mother directs them from is disturbed...

A simple map has appeared - pointing out the main square of the Crow's Foot neighbourhood in Duskwall. A time is indicated: just one hour from now.

They gather their equipment and swarm into the square; keeping an eye out for trouble isn't so easy - with the tension between the Red Sashes and Lampblacks reaching straining point. They do spot an old man sitting on a fountain, looking in their general direction as they scan the place.

They invite him to meet them in The Old Rasp, a small pub that neither of the (almost) warring factions control. It's small and they know they can scope the whole place out very quickly while keep multiple exits in view.

Branan is a high priest of those who worship The Guardian of the Gates, a forgotten god. He won't divulge how they gained his attention, and doesn't threaten their connection with the Wicker Mother in any way - they fear how easily it was influenced by the Guardian's power and listen to what the old man wants.

He tells them the the Hotspur, a Leviathan Hunter, under the command of Captain Dunvil will come into port soon. They are to board it before it enters the harbour (within the lightning barriers) and perform a ritual on the captain.

He hands over a rolled piece of parchment, on which a diagram of an occult symbol is carefully drawn. He instructs them to carve that symbol over the captain's chest and then; he takes out a small vial of black liquid; pour this into the carving.

Afterwards, they go away to their own business, wondering what machinations they're being drawn into.

Monger attends a grand dinner party, hosted by his father - who is very pleased with the rise in the family fortunes. In his cups, Laudius snr. divulges that Strangford is in serious trouble on the City Council - there's talk that he could be ousted. There's bad blood between the two, going way back to when Laudius was a significant player in high society. Monger puts his thoughts to work on ways to raise his own house on the Council.


Next Session: The Hotspur
Played by Donogh on Friday, September 22, 2017