With Monger smoothing the burgeoning relationship with the Billhooks, and GhostBlade perfecting a new ritual; it's left to Gap and Fancy Frank to expand the Cult's power and majesty.
They're eyeing up a vice den, operated by the Skovlanders. It's near Kellen's bar and takes up a space in between the rest of their turf. So it makes sense as well as bringing in some much needed cash.

Fancy Frank is familiar with this type of establishment from the war - cheap booze and sex keeps the Skovlanders distracted from their lot in life. He knows just the thing to get the superstitious northerners off their game.

If they can concoct a haunting by the Wicked Mother; chills and blood and maybe a reenactment of Her appearance in the White Horse in which a handful of Billhooks were sacrificed. That would be perfect.

With some spine-tingling artefacts from Moriya, they set up the Skovlan vice den for this horrific experience.

As expected a few days pass, and the place closes for business entirely and then the Skovalanders come looking for them. 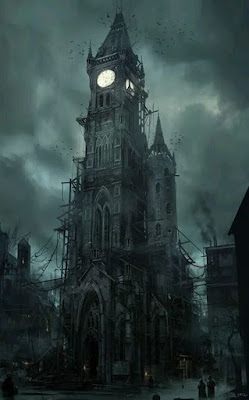 A few of them find the Orphans in the Red Lion. Their initial offer that the Orphans take over the running of the place in return for a tithe isn't well received. But then they appear to have second thoughts - if they can get some proof that the Orphans could dispel the effects, then they'll have to have a talk with the leadership to okay the deal.

They grab Strangford and a couple of his adepts and a couple of Quess' thugs and head directly there. The place is abandoned and the Skovlanders stay outside. There are a few things that Strangford has to do, but mostly it's an hour of pre-arranged theatre to fool any onlookers.

They head down the stairs to find the main bar occupied by Skovlanders. There are half a dozen of them. Including Ulf at the row of barrels which serve as the bar - he's sharing a pint with a druid (replete with antlered head dress). The others are at the front and back doors. This doesn't look good.

The guy who spoke to them in the Red Lion - Morgan - tells them to get the hell out and not to come back, and knees Strangford in the gut to show he's serious (Strangford ends up with a broken nose on the way down to the floor). Fancy Frank yells that this is crazy talk and pulls a knife and holds it at Morgan's throat.
The other Skovlanders, front and back have their own weapons out in an instant. The Orphans crew - bunched up at the bottom of the stairs, are like fish in a barrel.

With impossible speed, Gap vaults the barrels, landing just behind Ulf and whipping out the two smoke grenades from an upturned bucket where he secreted them previously - he chucks them towards the group of Skovlanders at both doorways and the smoke quickly fills them. They are blinded and although they open fire, it's not very effective.

Fancy Frank stabs Morgan in the throat and then charges towards the front door - he knows he'll be able to barge through the confused Skovlanders milling around in the smoke and distract attention away from the others.

Gap leads the rest of the crew out the door behind the bar. Strangford is being hauled along by two of his adepts. As Gap is making sure everyone gets out, he's sucker punched in the kidneys by Ulf. Gap throws a knife as rolls through the door, shutting it with a sweeping leg behind him. He exits through the front window as all the others go out the back.

As Fancy Frank races towards the door, Skehan, the druid, draws his claymore and cuts across the back of the Hound's legs. Fancy Frank stumbles, but his leather trousers protected him from the worst of the cut and he's out in the fresh air.

However, a dozen yards away are four fully armed Skovlanders, arrayed in a miniature version of a shield wall that Fancy Frank remembers with dread from the war. With only a momentary hesitation he draws his pistol and shoots at the leg of one in the middle, charging the outside flank of the warrior next to his unfortunate target, who collapses in a heap. His blade has little effect on his opponent, but he gets a sharp blow to his elbow in return. As he careens away from the fight, he has to check if his arm is still attached.

Gap comes out of the window and around the corner and sees that Fancy Frank will need help to escape this or he won't survive.

He attracts their attention and when a couple of them move to intercept he leads them on a merry chase, giving Fancy Frank the chance he needs to escape as well.

With their plan in tatters, things turn for the worse when an Inspector with a few Bluecoats shows up to arrest someone - Gap's going to Ironhook for a stretch.


Next Session: Daggers in the Streets
Played by Donogh on Friday, August 25, 2017