Back to the Grind

Previous Session: Not so Pure

Heading back towards Watering Hole, Kim the Savvyhead has asked Dusk the Skinner to stick around with her for a while. They stop in the foothills at the site of the ambush.

Kim taps into the Psychic Maelstrom to send an invitation out to Rum, the leader of the Marauders who raid any who travel on the road to Purity. Rum is addressing his warriors around the fire, when he becomes aware of her presence behind him. He hisses at her but then he hears something else...

...Dusk has just whispered his name into the Maelstrom and he feels the need to go to her. He brings the remaining half-dozen of his gang down to meet them and they appear over the hill in less than an hour. He's adopted his full regalia for this appearance, with leather armour, a large skull helmet and painted skin.

With Dusk nearby for support, and Dremmer up top in the gun-truck for backup, Kim negotiates a deal to allow her to pass up and down to Purity for her clinics there. She offers them repairs for their weapons and vehicles in return: proving she can do it when one of his gang hands over a shotgun that's badly jammed.

Dusk is eyeing them up, they're a rag-tag bunch, and despite some malnourishment they're obviously getting clean water. Looking at Rum cutting a deal with Kim, she reckons that he's probably going to gut her after a while; after he thinks he's gotten enough out of her, and just take her van. 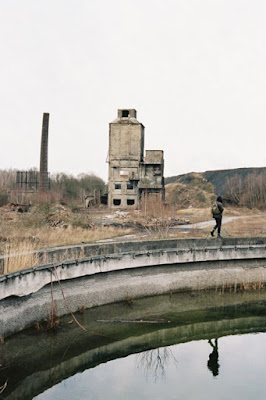 When they get back to Watering Hole, TumTum is still not back. Wanger looks upset inside the bar, some of the furniture has been smashed up and he tells Dusk that Ollie's hacienda crew were responsible. Out back, Navarre's gone too, as are the pair of guards TumTum left to keep an eye on him.

Ripper and Kim work out a deal for her clinic up at Purity. Kim tells the doctor about this new lurgy and hires her to come and take a look, just in case it's really serious. She also lets slip that they wanted to buy a doctor outright, but Dusk wouldn't allow it.

Kim goes to work fixing her taser (just 4 or 5 hours work) before she realises she's completely forgotten about Zero (the name she's calling the dying guy she kept alive from the Circus for her experiments). She rents a shed from Shady to keep him in, hooking him up for a blood-pumper (powered by a roof-top solar panel, one that looks suspiciously like one from Fox's stash).

Dusk has a few tattoo appointments lined up, the scuttlebutt on TumTum's absence is all over the map, but when she spots his favourite bottle of whiskey still opened on the top shelf of the bar she knows he's planning to come back.

T-Bone, a new Purity recruit into Wire's gang wants a solid tattoo; he's feeling happy and ambitious. But she talks him out of a flaming skull (too many of those floating around). Instead he gets a stark wolfshead on his chest, with flaming nostrils. While she's at work, he spills some gossip about the lurgy. Apparently people starting getting sick down in the lower levels a month or so ago. No one likes talking about it (at least Pierre didn't want anyone talking abou it). Doc Robinson died early on from it too, so that's why they needed a doctor.

TumTum appears a while later. He's got a couple of pick-ups and his guards. He walks into the bar, strutting like he's got aces in the hole. Dusk wonders where the hell he's been (maybe talking to the refugees from Logger?) but he grins and shakes his head telling her that the haciendas won't be happy with the deal he's just made.
Dusk isn't shaken off that easily and insists that he tell her where Navarre is; and he knows that look on her face and tells her straight-up. He took Navarre up to where Jackson and a bunch of Scum were camped out. He's hiring them on for muscle.

News is coming in from a bunch of haciendas, the ones which've just lost their leaders are in some kind of unrest. There's rioting in Ebb's old place and there are reports of raids, including a big one on Johnson's.

Kim checks in on Zero: he's doing well and she assesses the experiment as being successful so far, albeit that he's not very healthy. She wants to do a field test; so she brings him out of sedation. He's in shock and she gently tells him that she saved him after he got shot and has nursed him back from the brink of death.
He is overcome remembering the horrors of that firefight, and he just wants to leave to get back to his people. He's not pleased when he finds implants at the back of his skull, and Kim tells him what they do: force compliance with her orders, prevent him from harming her and cause a teeny tiny explosion in his brain if he should somehow overcome those inhibitions.
(she's taking careful notes: "And remember, this is for posterity so be honest. How do you feel?")


Johnson comes to visit Dusk (like he promised her) and has some ideas for a tattoo. Considering the aggressive and powerful hacienda owner, Dusk knows what'd be most fitting. He's got thick black gelled-back hair and she takes out a set of hair clippers, and he looks nervous.
-I'm going to make you a shark, fierce and dangerous, so that no one can mistake you for anything else!
If anything, he looks even more nervous. So she calls in A.T. to placate him, asking him if a terrifying killing machine that won't stop for nothin' isn't the perfect way to think of his boss. A.T. is out of his depth, but nods cause that sounds like a good thing to him. Dusk turns around as the door closes behind her
-Sit down
She pushes him into the chair, and Johnson kind of likes that, even if he could never admit it.
The tattoo covers his head, with a wavy sharkskin pattern on the top and back of his head, and the viciously sharp teeth coming down out of his hairline and up out of his jaw.

The conversation turns to her own tattoos, and she tries to brush him off. Telling him that they're special and she's not sure he can handle them. That only makes him want something like them more. She tells him that it's not for the faint-hearted. It'll require tattooing with the hammer, old-style, like her mentor, Midnight (the Witch King), did for her in the Witch Lands far to the north. Using essence of the serenity flower in the ink, she adds fine detail to each of the teeth: now there's an innate connection between the tattoo and the Maelstrom, and now there's an eerie, menacing quality to the tattoo.

Kim is feeding Zero something horrible like mashed turnip. She's happy squatting in the darkness of the ramshackle shed talking nonsense as he eats off the spoon she zooms into his mouth every so often. She even unveils her form in the Maelstrom, and he's horrified as he realises that the pink tentacles monster in front of him is in fact her. His form is much more primal, a wounded jackal who stares with cold malevolence.

A few days later, Johnson comes back to visit Dusk again. This time with Killer in tow. It's his gift to her, he'll make sure nothing happens to her. She's dubious, and quickly establishes that he still works for Johnson and not her, so she refuses. He's desperately looking for something to gift her, and she wonders if co-ownership of the Hacienda is on the table. He's hungry, but unsure and she pushes him back to the chair again, waving Killer out of the room.

When they're finished, he asks her if she'll visit the hacienda soon and she nods. Johnson leaves, and when she enters the bar, everyone there knows and she buys a round for the house with the proceeds from his shark tattoo.


At the hacienda, Johnson has been bolstering his defences, they've been raided by savages from the hills (probably Rum and his Marauders). Kim is continuing her experiments with the new taser there on site. There are some successes, some explosions and some fatal mishaps.

When Dusk arrives, she suggests that maybe she should try shooting at rocks and not people, at least until she irons out all the basic kinks.

Dusk is treated to cocktails on the veranda, but she insists on staying in separate rooms and on returning to Watering Hole after a few days.


Next Session: Complications
Played by Donogh on Thursday, February 02, 2017