Previous Session: One Night Only

In the pre-dawn light, Dusk the Skinner and Kim the Savvyhead head out to take a look at the carnage from Navarre's rampage and the Circus' withdrawal. They drive there in Navarre's monster truck (Dusk finds a sawn-off shotgun under the seat and readies it, just in case).

They find a handful of burnt out and abandoned vehicles, with dozens of bodies and they start looking for survivors. Unthinking, Kim puts a trader with a belly wound out of his misery, but Dusk gives her a stern look - Ripper, Watering Hole's doc might be able to help some. They drag the locals they find out of danger from the fires, and then Dusk finds a still-breathing Navarre, half-buried under a pile of his victims. They haul him back to the flat-bed and drive him back to get Ripper, who has turned Dusk's place into an emergency surgery.

Ripper's not too sure when she looks at Navarre's wounds (3 GSWs and some broken ribs) and hears his name that his credit is good, but Dusk vouches for him. The fact that Dusk is acting like a friend of this feared road-warrior surprises some (especially given his obvious mutations) and rumours start to circulate. 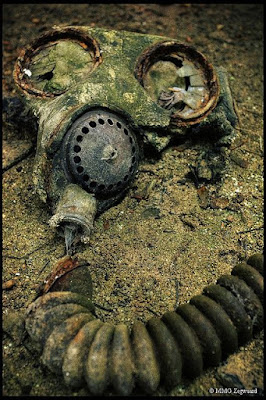 Inside the bar, Dusk gives TumTum a chance to salvage his civic pride. He's going to leave Navarre alone - he really wants to isolate and interrogate him, but Dusk promises him a chat when the road-warrior is back on his feet. In the meantime, he should organise the recovery of the wounded, and salvage of the remnants.

Kim heads along, to find something interesting. She follows thin wisps of pink smoke into the collapsed big tent and comes out with the dispersal engine for the hallucinogens. One of the two machines is fine and the other is good for parts.

Back at his place, TumTum's anger is beginning to show, and wishes Dusk would make herself useful. He doesn't even know what that means, and Dusk whispers to him across the bar that she could call Mimi back. TumTum is incredulous, and wonders how that's possible. She tells him the she'd do it the same way she called Navarre here.

He's definitely interested and goes off to round up a posse, while Kim tries to check if the Circus' leader is even still alive (he is, but is doing poorly and probably won't recover from his wounds).

When Dusk grabs some sleep in her chair Kim speaks to the nervous Goddamit! She wants to pump him for information about the Circus and Mimi. He's only been with them for a few seasons, since they were east of Logger. They were just a travelling circus until they went through Logger, and then they met up with Doberman. His people joined as muscle and things took a nasty turn. Where previously they had left people weirded out, now they left carnage. Loads of new blood joined and Doberman was in charge of them all. He minded the Circus and stopped bad trouble from harming them, looking after the non-Show clowns and biker gangs.
Over a month or two moving around inside Logger, things got weirder and weirder and then they moved out into the Valley where smaller holds and haciendas got the same treatment.

But Goddamit! is real nervous. He wants Kim to help protect him, maybe get him to Lopez. He's seen the way people are talking about treating anyone from the Circus and fears a lynching. Kim tells him to keep his head down and tell her about Doberman. She gets the rundown on his appearance, but she'll tell TumTum that they need Goddamit! to identify him.

A.T. arrives at the bar to grab Kim for a chat with Johnson, who's holding court. He's heard of her super weapon and will put all his resources at her disposal to acquire one. She can't guarantee him the same results, and won't sell him hers. But she'll do some experimentation and come back with an answer/offer.
He tries to pressurise him into visiting his hacienda, to sleep and eat with him and build his new weapon. But when Kim introduces herself properly (her terrible family history) he backs off a little and accepts her offer to meet up in a day to discuss terms fully.

She tells TumTum to keep Goddamit! safe, and tells him that he's there to be a 'canary in the coalmine' if Doberman comes to extract vengeance on them - he's the only one who can identify him.

Dusk wakes up in her chair at the doorway to her shack, clutching Navarre's sawn-off. Johnson is standing over her, bodyguards lurking behind him. He wants her to walk with him, talk about something important, so she grabs her coat and follows.

He wants her to back him in ousting TumTum - he fucked up in allowing the Circus in and in letting them run rampant. She shakes her head. The Circus drove up outside and she doesn't really think TumTum could've stopped what went on.

Anyway, does he really have what it takes to run Watering Hole? He should concentrate on sending out his people to bring back the heads of the Circus clowns and Mimi specifically if he wants to ride the popularity wave.

Otherwise, he'll have to deal with idiots here telling him what the best way to manage the water, and walkways and market layout is, while making them all play nice and not burn the whole place down.
He'll have to juggle egotistical hacienda owners' competing demands (and appear neutral while doing it).
Then he'll have to convince Lopez that he's not making a power grab over the entire Valley, which'd provoke a devastating response.

Johnson isn't happy, but obviously he thought it would be easy, and thanks Dusk for her advice as he walks off.


Dusk turns around and walks back to the bar. Getting TumTum to pour her a drink. Without mentioning names she tells him that she just had to talk someone out of killing him for the Circus. When she asks him why he killed Blackjack and Nero (two other hacienda owners in the bar after lock-up) he shrugs and blames the crazy smoke. She's not convinced, but moves on. If he wants to secure his position he'll need more help, and not from the hacienda owners.

He thinks he could go to Lopez to get soldiers, but she tells him he's crazy. He should go out on the road the bring in Logger refugees. They'll add to Watering Hole in any case and the tougher ones will be grateful and useful in a fight.

Dusk calls Mimi back, and TumTum musters his warriors, along with the Skeleton Crew and some of the agreeable hacienda soldiers as a reception party.


Kim starts work on the new phaser for Johnson, taking her own one apart to figure out how to amp the power up reliably, while putting in an on/off switch and an emergency shutdown circuit inside her own tricorder (for her own safety).

That night, Kim dreams of a powerful man in a dark room. It's too dark to make out, but he's looking for her. Then there's a bright, blinding light which silhouettes him.
-Where's my jingle!
in Lopez' voice


Lo and behold. In the middle of the night, the sentries spot a lone vehicle approaching Watering Hold. From the direction the Circus left in. It's a small minibus, and it pulls up outside the gates. Out steps someone else (it's not Mimi). Dusk asks him who the hell he is and he goes inside the bus to drag out a terribly wounded Mimi.

As Kim checks the perimeter (paranoid her!) Dusk asks what he had planned. The blunt answer back is that he didn't want to die. They had been going south to find somewhere to hole up, and the rest of the Circus kept going when Mimi heard the siren call. He could only force a couple of them to take him back.

Dusk nods at TumTum, and he gives the order to his death squad to open fire. They don't stop til their magazines are empty.


Next Session: Cold Pursuit
Played by Donogh on Thursday, December 15, 2016