Before breakfast, Chloe the Infernal goes for a run, and after circuiting the playing fields she goes into the woods. She spots a flash of skin running across the trail, and after a brief moment of surprise, follows. She doesn't sprint, she just trusts that she'll catch up eventually. After a few minutes she catches up to find Emily scrambling to a hidden rucksack and hurriedly dressing herself. 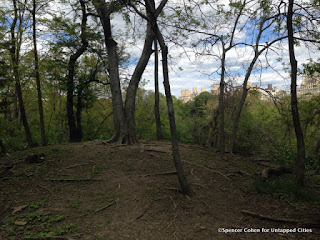 Emily doesn't want to talk, but she wonders if she can trust Chloe with her secret. Of course she can says Chloe.
-Don't waste time on this dirty mongrel
scowls her Dark Power inside her head.

At breakfast, Chloe is about the last one to arrive in the dining hall. She sits down opposite Emily, and along come Maria and Madison the Witch. Maria knows that Chloe is crushing on Emily, and can sense her nervous excitement, but Madison doesn't even recognise her.
Chloe quips that Madison has been siting behind her in Spanish for months; how could she miss that red hair!

Conversation turns to why Maria isn't sitting by Jimmy like she usually does. Chloe muses that she can't have dumped him already; but there's an awkward silence as Maria concedes that it's true. Maria assures Chloe that in the end he was a real douche anyway. But Chloe doesn't let up; when Maria says that she's bored (of this conversation), Chloe stings back with
-of Jimmy?

Madison approves of this stronger strain of bitchiness from Chloe.

Victor the Ghoul is conspiring with Cameron, who's noticed that the there's an undercurrent of awkwardness at the teachers' table. Something is wrong between Mr. Armstrong and his wife, Miss Carter-Armstrong...

As the breakfast finishes and Emily gets up to leave for class, Chloe grabs her hand and wonders if they can talk about what happened earlier in the woods, maybe at lunchtime. Emily is embarrassed, but suggests a picnic outside on the grounds.

While that's going on, Victor cuts out to talk to Miss Carter-Armstrong. He's been wondering about her differences with Mr. Armstrong. She dissembles, but thinks that Victor is so sweet for thinking of her. She gives him a quick hug, but quickly backs off as it lingers too long. She writes a note to excuse him for being tardy, making sure that there's no touching as she passes it over to him.
As he walks out the door, he turns back to observe
-I don't see Mr. Armstrong around school late anymore

Maria and Chloe talk about who they're going to bring to the formal. Maria reckons that Chloe should ask Emily, but Chloe isn't so sure, plus she really doesn't think that's what Ms Wells meant when she laid down the law on male and female couples. Maria laughs
-never follow their rules!
Chloe is thinking of bringing Javi; such a vanilla choice which obviously bores Maria, but she doesn't say anything.

Chloe thinks Madison would get along / suit Maria, half in jest, but later on Maria asks her. Madison plays hard to get, it'll cost Maria, and she wants her to get Emily's notebook for her.
Maria misunderstands, and wonders
-why, are you into Chloe?
But the utter confusion on Madison's face gives her the chance to dissemble and the moment is lost. But Madison catches herself smiling as she wanders away to class with a date for the night.

At Chemistry, Miss Wells oversees an experiment. Cameron is sitting with Victor, they go right off-curriculum, pulling out the Anarchist Cookbook and scheming to get someone in trouble with some explosions/fire. Maria and Madison are paired up, and somehow Maria's gotten her hands on Emily's notebook already. Javi is picked out with some regret by Chloe, who bites the bullet to line him up for the dance tonight.

Maria and Madison are talking about Chloe, but pretty quickly it goes off the rail with rising jealousy. Maria's nascent bitchiness comes out and Madison gets really defensive. In swoops Victor, who seeks to distract them as Cameron swaps out their solution and sets them up for the pyrotechnics.

Chloe struggles to get Javi to complete the chemistry lab, he's just not
getting it (maybe chemistry just isn't his thing, but he does seem like a bit of a dummy). She coaches him to read the instructions carefully. When they reach a lull, Chloe wonders if he's got anything planned for tonight. He thinks for a moment, and then it hits him; maybe they can go together! Absolutely. Chloe can't wait for lunch.

Victor notices that Madison is wearing his shirt, but oh-so snarky, she muses that she doesn't even remember where she got it. Suddenly Maria's long hair is on fire, and Victor ripostes
-Your girlfriend sucks at chemistry

At lunchtime, Chloe meets Emily in the hall after picking up a basket of fruit. Instead of just going to the playing fields, they head out to a clearing near the edge of the woods for their picnic. It takes a bit of encouragement to get Emily ready to talk. She asks Chloe if she'll promise not to tell or run screaming. Chloe tries not to joke, but tells Emily that she's pretty good at keeping peoples' secrets; but when Emily wonders what these could be, obviously Chloe can't tell her.

-I'm a werewolf
-Really, or are you just messing with me cause you don't want to tell me the real secret?
-I'm serious. I change into a wolf, and I can't really control it. I don't hurt people though
The Dark Power sighs and Chloe can feel him rolling his eyes inside her head.

Chloe tells Emily that sometimes she feels like there's a part of her that's darker than she can handle. Telling her to do things that she shouldn't do. She starts by thinking this is the best way to tell Emily that she understands, but then she realises that she's ashamed and can't tell her the whole truth. Emily has no choice in what she is, but Chloe does. She goes quiet.

Emily reaches over and leans in to kiss her.
-I suppose I can't stop you being stupid
mutters the Dark Power inside
-Will you just leave me alone!
Chloe struggles to keep her face still as she shouts at Oberon inside her own head and relaxes as he fades away.

She kisses Emily back.

Madison and Maria are planning payback in Madison's sanctuary. At high noon, they burn Victor's shirt in a ritual to bind Victor in a Ring of Lies. The ritual has a weird spillover effect on Madison. But one way or another, Maria is turned on in the afterglow of the ritual.

Victor and Cameron are plotting how they're going to ensnare Armstrong and Carter in their plans.

Meanwhile, Chloe and Emily have spent their whole lunch break making out, and when it's time to head back to class, Emily wonders what Chloe is doing for the Fall Formal. Chloe sighs,and explains that she's already asked Javi, but nothing's going to happen there. Crushing Emily's hopes makes Chloe feel terrible, but they agree to meet up tomorrow night instead for something.

Sidney walks in on Madison and Maria having sex in the room they share. She grabs her other bag and leaves, shaking her head, and is not impressed by Madison's invitation for her to join them.
Maria gets up to leave, while Madison secrets Maria's top for later use.
-I have drama
-Don't we all
But Madison wasn't following. Maria has drama class now, they're doing 12 Angry Women.

Chloe makes her way to Mr. Armstrong's room after last class. Peter Armstrong is surprised to see her, at least like he was expecting someone else.
-I know
declares Chloe resolutely. Continuing despite the confused look on Mr. Armstrong's face.
-I know about you and Ms. Wells.
The door behind her opens and in saunters Ms. Wells. Armstrong tells her that he'll be with her in a few minutes and she leaves again.
-Dump her or I'll tell Miss Carter

The Dark Power angrily shouts inside her head
-Come on! This much leverage and you've got to get something out of it! Straight A's at least!

Chloe grimaces and starts again
-and maybe you can start giving me A's. I'm continually getting B's from you and I think I deserve the benefit of the doubt where my essays are concerned.
Mr. Armstrong grows in confidence and insists that Chloe can hardly expect both things out of this. She'll have to pick one.

Chloe reaches back inside her mind, drawing on the Dark Power's vast reservoir. She looks Armstrong in the eyes and insists, with hypnotic certainty, that he will do both. But he just shakes his head, and counters that he'll take a closer look at her grades in future. Maybe she can expect a few more A's.

Chloe says ok and walks out, storming past Ms Wells
-He's all yours now!

And she gets ready to go for a run, incredibly frustrated with her and the Dark Power
-It's hardly my fault if you can't leverage my extraordinary gifts

Victor meets Sidney in the hall. They quickly bond over Madison. She's being a bit of a bitch at the moment. Sidney's surprised to find Victor on the same page as her where Madison's concerned.
-She likes playing games with people are I don't like that
-I don't either
but Victor's response is punctuated by him doubling over in pain, like he's just been punched in the stomach.

As he recovers, Sidney says that she thought that he was being very jealous earlier at Chemistry, and Victor denies it out of hand and falls to his knees.

He helps himself up, using Sidney as support and when she suggest that they head to the nurse's office, he grabs a sharpie out of her bag and writes the name and address of a club on her arm
-After the dance we're going to head here, so I'd love it if you came along.

When they get to the nurse's office he seems a little bit better, but then, between one lie and another he dies in agony on the bed. Sidney's there, but the nurse had left to call for help. She's crying over him as he returns.
-Very exciting news
he drawls, as good as new.