in which various unwelcome visitors get mixed receptions.

As morning breaks and Vision collects his followers together for a ritual, Clarion, Duke and another few have disappeared. There is a vague recollection amongst the others that there got into a heated debated over why Duke didn't pitch in fully during the previous ceremony. Vision finds a severely bashed-up Duke near the latrines. He's not happy (and neither is Sheila) but won't explain exactly what occured. 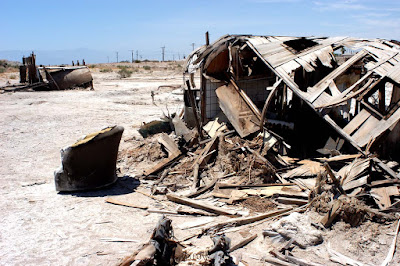 The sentries at the gate alert Chaplain to come and see - they've spotted a old crone of a Fuck Sister slowly approaching the hold. When it gets closer, Chaplain can tell it's dead, just like Colonel's little girl. Vision comes down and make like to open his brain to see what it needs (he still has an urge to help her), but Chaplain just draws his 9mm and shoots her through the head. She falls to the ground slowly, but then gets to her feet and continues to shamble into the barricade at the gateway. He goes to work with a machete (borrowed from Buddy with thanks) and the body just becomes more pitiful as Chaplain cleaves into it - brain and spinal damage seems to be the only way with these things.


Vision convinces Chaplain to let him guide her through Maersk and beyond, with his cult escorting her to ensure nothing untoward happens.

Beagle's small convoy approaches. They're not let through the barricade - Chaplain explains that they've had a bit of trouble with the gate. They head over to Joe's Place to privately discuss their deal over a cup. Beagle says it's still on, but does add some interesting news that he's healed Mud up - she's definitely now 100%, but he had to act for profit or he'd be of no use to anyone. He's hatched a plan to take out Dust's other main lieutenants, and Chaplain will have to take advantage.
Chaplain wonders why he just doesn't let him get into the backseat next time he drives into Leafy Hollow and that'll sort them out, but Beagle won't sully his reputation by acting against Dust directly like that.

Meanwhile, Gabe has followed the old crone to the top of the settlement, where she's unable to find any purchase to get up above the rocks. He tries to heal her, but while he has some effect on the physical wounds, he doesn't sense any person (but rather something or an otherworldly presence) inside. He takes a machete to her, and eventually severs her spine (and covers himself in blood in the process).

Zeke wants to trade with Beagle, despite Chaplain's misgivings about him. They let the two black vehicles in through the barricade. Beagle's five or six helpers are all unsociable, and in fact uncomfortable if approached. Instead of talking to them, Gabe gets to speak with Beagle. He's very interested in the healing skills he used on Mud. Beagle explains he had a cache of luxe and hi-tech medical equipment which took care of her, the kind of one-off use items he probably won't see again. Beagle's very interested in Gabe's family history, and fishes out a couple of glow-sticks as a trade for the low-down on who his parents were and what happened to them.

Chaplain grabs Gabe to get some healing done, but as he takes a look at the battered shoulder of the Gunlugger, Gabe gets really pissed off - Chaplain's acting like some kind of asshole. He can't just go out picking fights and then expect Gabe to treat him at the drop of a hat. He won't be available next time Chaplain pulls this shit. Or he can take his meds like everyone else and rest for a few days.
Chaplain doesn't like that at all - Gabe doesn't understand that if Chaplain needs to protect the hold, he can't just sit around on his deck chair up next to his van, he's got to go out hunting or be ready to defend the walls. Anyway, the argument is unresolved, but Chaplain takes his bruised body up to the top-level.

Beagle stays for the night, there's a bit of a hooley, with food from Franklin's being laid on. Some find guitar playing from Chin. Beagle's quite the chatty fellow, stays up till the very end and charms the socks off everyone in the vicinity.

In the morning, Vision harasses his followers into becoming more hard-working and dedicated members of Maersk. He gets them to work, During the ceremony later on, Vision contacts Rebecca through her dreams. They discuss dead people, but she doesn't understand what Vision's hinting at in her dream fugue.

A few days later, a dozen naked rambling corpses come up the road to Maersk. The sentries are freaked out. Chaplain recognises GamGam from Swinetown and a few others (including her two sons). Vision has been pushing his people, but Chaplain recognises that they need an output for their violent tendencies. He suggests to Vision and Clarion to take care of them. The dozen or so culties grab clubs and whatever's handy and rush down the hill to beat them into pulp. They're exultant at this sudden and unexpected release. A few of them go crazy with decapitations, and Beagle is genuinely shocked - despite Chaplain's matter-of-fact explanation of what these things are.

Before he heads away Beagle arranges a timetable for their plan. It's a couple of weeks away now. Passing Beagle's vans on the way back in, the cult are redirected by Vision into fixing up the gate and doing a bit of work on the walls.

Over the next while, there is some probing and skirmishing between Leafy Hollow and Maersk, and some additional walking corpses appear. Three or four days later, Allison shows up with a few guys in her buggy. She's not going to help directly with Leafy Hollow (she would if Chaplain gave her the MG overlooking the gate though!). She does bring news of Swinetown - Golf murdered GamGam and all her loyalist in a coup. He dumped the naked bodies outside the hold; she's utterly gobsmacked by the revelation that these corpses are now walking around. Frankly she's a little bit downcast that her news has been trumped and can't bring her a-game to the usual witty banter.

They hear shots in the night, and when they go out to investigate they find a rocky trail with a circle of dead Fuck Sisters around it. It's obvious there was a couple of vehicles here with some heavy firepower - surprised the hell out of their ambushers. Then one of the dead stands up, right in front of them, and Chaplain suggests they follow it to see exactly where they're heading if they don't come up the road...
Played by Donogh on Thursday, May 14, 2015