in which choices are made, and ass is kicked. 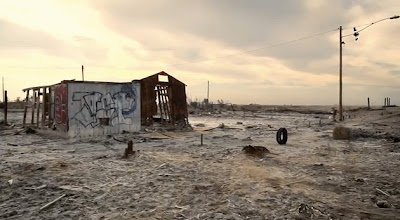 After passing the word around, Chaplain calls on Allison. She's not entirely happy about heading back the next morning, but accepts she has little choice but to follow suit.
Gabe has nightmares that night (his hands getting continually mauled) before he wakes up to find the infection has abated along with the fever.

As Vision and Charlie return without Rebecca, the cult members begin to worry. They aren't as trusting as before. Vision goes to Parcher to complain about the abduction, but without proof, won't get any action from her. She does want Vision to sent Jammy home; his mother is sick and needs him. But Vision con't promise to hand over one of the cult. With that outright refusal, Parcher kicks her out, even before she finishes her eggs.

The little convoy takes the Hill Road back, the quicker and safer route of the Valley Road goes through Leafy Hollow, so that's not an option. They come across a few trees down on the road, but no sign of a nearby ambush. They do find a few Blood Coyotes chewing on a huge 'mander on the side of the road. Unusual to find them down from the hills during daylight.

As they're stopped and clearing the road, Vision gets a scent of balm and menthol - suddenly Rebecca (Ba's mother) is sitting in the back seat with him. She warns him that they were trying to find out about him. Parsons is a puppet for the Night. They hate Vision, there's something about him that no one's seen before.

Coming up to Lookout Rock, they pile out to check for ambushes, someone notices a vehicle on the road behind them. Probably too far behind to be a concerted effort against them, but definitely worrying. Chaplain grimaces as he eyes up the ambush the Fuck Sisters have set for them. They're not at the usual ambush spot, but they're covering the Rock where someone would go to cover the convoy through. Clever girls!

As Chaplain advances, yelling back to let the others know what's going to happen, the Sisters open fire on him. But his response is devastating. He looses a few grenades at them and as they retreat in disorder he sprints up to the Rock to send them packing most definitely. Turning around, he sends the secondary ambush running for cover as well - they were behind some rocks at the tight switchbacks.

Recovering from the visitation, Vision looks out the back window of the truck - seeing a glint in the distance - and gets shot through the shoulder. Someone's up there with a seriously hi-tech sniper rifle. The convoy accelerates through to the switchback on the trail to guard against the attack and the vehicle coming up behind them.

Chaplain quickly spots the sniper's position, he races to come around behind it, keeping terrain in between him and the sniper. When he comes around the rock, the sniper has gone, leaving only a blanket and a single cartridge behind.

There's a bit of panic in the convoy as the following vehicle gets closer - it's a beast of an armoured vehicle which looks like it'd crush most of the convoy without breaking much of a sweat. But Gabe placates Fianelly - he recognizes Colonel's war rig. They bring them to Maersk, but as Gabe organises medical resources for Angie, someone pegs that there's an infection and they get locked out. Even Squelch (the local water carrier) gets caught up in things.

Waiting around, Chaplain and Colonel get to chatting; mostly about the Beast, but also about Colonel's circumstances. He's the hardholder of Stonebridge, at the far end of the valley. He picked up the Beast about 60 miles south, and while it's one hell of a battle-winner, he reckons Chaplain could give it a run for its money. Of course back in Stonebridge they've had a couple of real wars, not piddling little skirmishes like over this end of the valley.

Chaplain fills in Zeke about the Leafy Hollow situation, he puts in a request for a hunting rifle from stores. One way or another, he's heading down there to take care of Dust and his mates.

Gabe's quarantine lasts a while - Angel takes him to task for sending sick and contagious people their way, but Gabe didn't think but to offer help. Gabe yells at Angel to calm down and gets a straight-up punch in the mouth for his trouble. It does seem to calm Angel down. He dons his mask and gloves to give every one of Colonel's people an exam.

Gabe gets a strong impression that Angel has seen or heard of this kind of thing before - his questions are more laser-guided than usual:
-does everyone present with grey scaly skin?
-is there any association with strange visions from/of the Maelstrom?

Angel ropes in Vision to help out, telling Colonel that he can't help them. To him, Angie looks healthy and resplendent through the maelstrom. She speaks to him clearly there (though to everyone else her side of the conversation is gibberish and flailing), she relates that she's never felt better and that she's waking up.

Angie relates that about nine months previously, a strange band of entertainers arrived in Stonebridge in a wondrously painted bus. After that visit, Angie started to think about how the world should be, and life started to be better for her. The Mountains are so good - something there is going to heal the world.
Now her flailing is so bad that Colonel and Andromeda are straining to intervene, but Angel holds them back. And suddenly she loses consciousness and stops.

Chaplain stalks out of Maersk, and takes a winding route around to take up a position to the north overlooking Leafy Hollow. From there he can spy the square and tower without much trouble. But to his chagrin, someone's already on lookout in the tower, he gets show by whoever it is as he sets himself up. He spots Mud reloading her rifle but he guns her down - she's in serious trouble, even if she gets an angel to look after her right now.

Chaplain scarpers to avoid the inevitable hunting party - as he leaves he spots Beagle's two black vans approaching the hold. He goes well to the south before curving back towards Maersk, avoiding the dogs and taking measures against leaving much of a trail. He gets back home just as night begins to fall.

Back at Maersk, a terrible wail fills the dusk as Andromeda mourns Angie's passing.
Played by Donogh on Thursday, March 19, 2015