The Iron Sword of Ages

Rudiger slept the sleep of the almost dead.

Outside the town walls, battle raged furiously on. Peering from the battlements, a weary Fafnir watched as disarray manifested in the rear lines of the orc host. Soon he spied Varloshi standards amongst the dust as it became apparent that the Duke had at last ridden south and was charging the attackers in the rear!

Quickly, Fafnir gathered fifty strong warriors to him. With a rousing speech, a little lost in translation, this crack squad of troops sallied forth and launched into the Orc ranks. The Iron Sword of Ages sang as it whirled through the air, leaving bloody rents in its wake. The troupe concentrated their assault to cut a swathe through the orcs to a low rise, where stood a coherent group of the enemy, along with their standard. Fafnir roared a challenge as they mounted the hill, and the warlord atop fixed a hate-filled gaze upon him. This huge, four-armed berzerker charged down the hill to do battle. 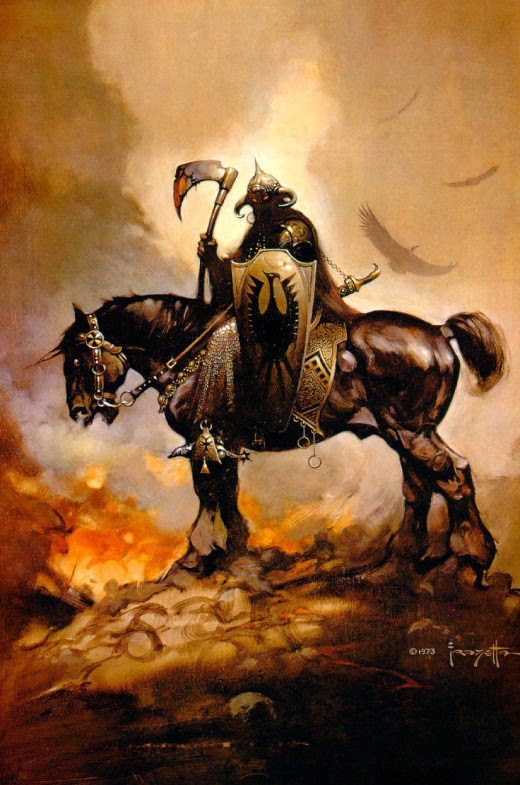 Like two titans they crashed into one another, dealing blows with untold savagery, arcs of blood spreading far and wide, until one lay dead, and one stood unsteadily on his feet, inches from his last breath.

Rudiger awoke. 'Is that fighting I hear?' He donned his armour and hobbled out of the fortress.

Bjorn the dwarven cleric rode in on a pony with the Valroshi troops. Aiming his cross-bow, he attracted the unwelcome notice of the Orc standard-bearer. Pulling up beside the wounded Fafnir, Bjorn called upon his craven gods and attempted to lay hands upon the barbarian. The orc, appeared, as if out of no-where, swinging an evil-looking weapon at the dwarf. Dodging quickly aside, Bjorn escaped unharmed, leaving his mount to take the blow. The orc closed in on Bjorn, but Rudiger launched to the defence, efficiently dispatching the attacker with a devastating blow.

When finally left alone to concentrate, Bjorn finally managed to channel the power of his gods to bring Fafnir back from the brink. His wounds lessened, cuts healed, rents scabbed and closed. Even as the cleric chanted his last prayers, Fafnir breathed a shuddering sigh of relief.

The day won, the party retired to Iron Gate for a debriefing with Duke Cawley. Bjorn suggested that they contact the southern dwarves for help against the orc menace, but the Duke disapproved on any foreign incursion onto Varloshi lands. The heroes rested up, and then gathered their belongings and headed south to reclaim the Dwarven crown from the Spire.

The first stop was Blackstone, where the gatekeepers were most unwelcoming, remembering as they did Fafnir and Shank's troublesome schemes of old. Rudiger, however, had a way with words and a bag of gold and gained the party entrance for the night. A night's rest later, Fafnir and Rudiger were fetching water before leaving, when members of the posse that had chased them into the desert, a lifetime ago, challenged them. Some cross words, some posturing and some shoving led to a swift, but bloodless end and a hasty departure. Once more, Blackstone and the party left on bad terms.

They quickly found the old oasis, with its entrance into its underground labyrinth, and the promise of a cooler route under the desert.

The tunnels were as remembered: ripe with Kobolds, but also populated with a Dragon Whelp: distinctly nasty in a closed space. Bjorn communed with the stones and heard tales of 'the white scales', ' the bridge', and 'the circle'. What these portents meant was still a mystery, but none of them sounded like allies.
Played by Donogh on Monday, July 07, 2014