A first playtest of my Iliad-inspired Fiasco playset... 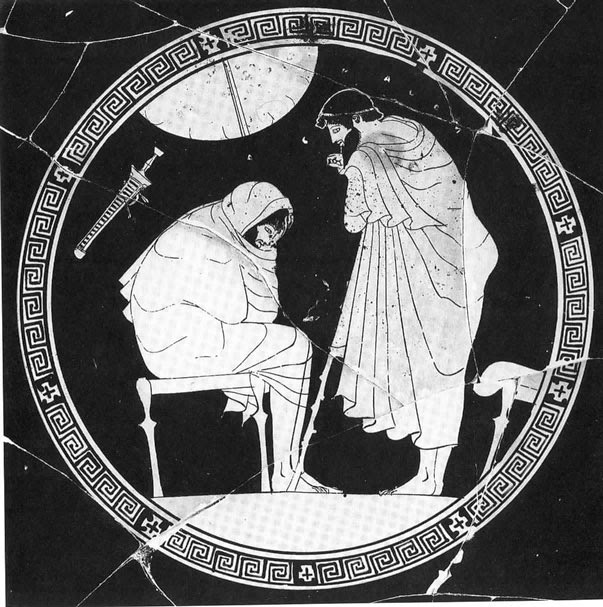 Everyone knows the story of the Trojan War, right?
Helen of Troy, whose face launched a thousand ships?
Achilles sulking in his tent?
The scheme of the Trojan Horse hatched by Odysseus?
You don’t know the half of it: it was the original fiasco… 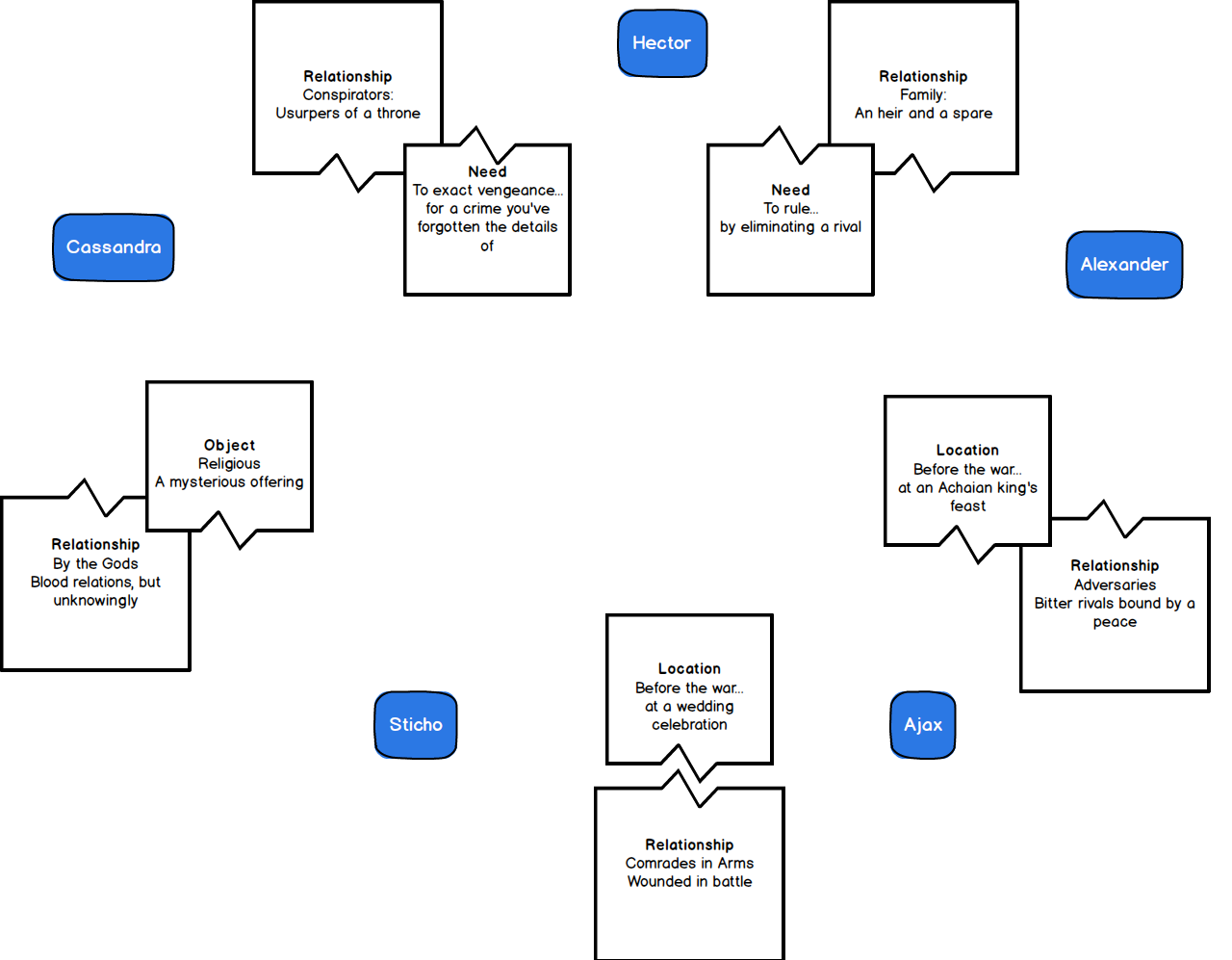 Ajax’s ship draws into the bay, its tattered sail and damaged hull speaking to the harsh weather and other troubles he encountered on the long voyage to King Agamemnon’s feast. Despite the hammering the ship took on the trip, Ajax strides down the gangplank resplendent in his princely regalia and is keen to impress.

The gnarled figure of the warrior Sticho hold up the bar at the feast, now well underway. He bumps into Ajax, spilling the other warrior’s wine; but it’s just a long-standing joke. The two firm friends proceed to cause havoc amongst the revellers, smashing tables and pottery alike in beating each other senseless!

Years past, Cassandra kneels in supplication in a secretive shrine to Eris. She makes an offering to the god of discord to change the natural order of King Priam’s succession, placing Hector before Alexander as the king’s heir.

Hector watches Ajax from the other side of the feast, he knows that Ajax and Alexander have some grudging enmity and wants his brother out of the picture entirely before his father dies and leaves him the throne.

Alexander feels trapped at this feast, he fears his brother’s assassins and is formulating a plan to gather allies to dispose of Hector. However, the embattled pair of Ajax and Sticho crash into his table and propel the young prince down the nearby stairwell, breaking Alexander’s leg at the bottom.

Ajax’s head is pounding; from the copious amounts of wine and the pounding Sticho’s fists inflicted the previous night. He rolls out of the pig sty just in time to get a faceful of water from a bucket. Standing above him is Prince Hector with an offer.
War is coming and in the Hector wants Ajax to stand beside Alexander in battle and make sure his brother doesn’t survive the clash of arms.

Sticho and Cassandra lie in bed. Cassandra tells a tale of how cruelly treated she was by Alexander and how she trusts that Sticho can help her to get rid of him and bring a just king to Priam’s throne. Their pledge of love is interrupted by a knock on the door. A bedraggled Ajax needs Sticho to do a job with him, it’ll involved war and there should be a significant payoff at the end for them both.

Cassandra visits Hector to relate the chance meeting she just witnessed. She’s unsure of the wisdom of trusting Ajax in their plot to finally get rid of Alexander, he seems too concerned with earning a few pounds of silver.
As Cassandra sows the seeds of doubt in Hector’s mind, Ajax stands unseen at a doorway listening to lies being spread about him. He enters calmly as Cassandra finishes and turns to leave

Ajax enters to tell Hector he has Sticho onside; though he doesn’t know what Sticho wants. Hector is unable to convince Ajax to take cash after Alexander is dead, but does give him a sealed warrant granting him land, valid once Hector is king. Hector wrangles with Ajax but manages to bend him to his will.

Rescued from the basement by Ajax, Alexander puts their enmity aside to form a regiment for the war. Ajax helps to train Alexander back to full fitness and beyond so that he becomes a trusted lieutenant and leading member of the army. Rumours pervade amongst other leaders that Ajax and Alexander are lovers.

A dangerous animal (actual or metaphorical) gets loose

A sudden reversal (of status, fortune)

Ajax stands in the battle line, steadying his men for the coming battle. He’s nervous and looks behind him to where the tent of Hector and Alexander are pitched. With Sticho (who still wants to talk to Hector in person) he walks up and into Hector’s tent, where the prince is somewhat startled by their appearance in full battle panoply. Hector looks shifty at best and Ajax confirms he’ll take care of Alexander during the battle, but Hector asks him to leave him and Sticho to talk alone.

Sticho just wants for his family to be taken care of, and is oblivious to the burgeoning distrust of Ajax in Hector’s mind. Rather than anything like a piece of paper he wants to test if the loyalty of his future king matches his.
He draws his dagger and cuts his upper arm (deep, but not enough to hamper his fighting) and demands that Hector follow suit. Hector blanches, saying a king does not take demands from his subjects, but eventually he does the same. Sticho leaves, satisfied that Hector can be trusted.

Cassandra, heavily pregnant with Sticho’s child walks out of Hector’s tent, just as Sticho and Ajax walk up the hill. She cuts across to Alexander’s tent. As Hector watches her leave, he starts to doubt Sticho’s loyalty; is he conspiring with Alexander? Is Ajax actually the one he should trust?
She takes great pleasure in telling Alexander that his father has just died, and seeing his confidence die (and she expects his mortal form to follow…) as his threats fall off her retreating back.

Hector takes the news of his father’s death well. Finally he is the rightful king! He just has to win this battle and dispose of his brother.
We then see Ajax wandering through the camp and up to Prince Hector’s chariot, where he cuts through most of the traces to make sure that Hector loses control at some stage after the beginning of the battle.

The battle has begun, and Alexander’s fatalism has already gotten him into trouble, he’s driven his chariot into the enemy lines and he and his crew are in danger of being overwhelmed. Just as he appears to have gotten out of trouble and returned to the safety of his own men, an arrow flashes through the air and skewers his neck. He crashes to the ground and Sticho grunts with satisfaction as he quickly puts away his bow.

Ajax has stayed close to Hector throughout the battle, but now with no sign of the traces he cut earlier breaking he takes matters into his own hands. Protected Hector from arrows with his large shield he reverses his sword quickly and slaps the nearest horses rear with it, setting the chariot out of control and off into enemy lines.
However now, the enemy soldiers who had been arrayed against Hector, turn their attention to Ajax who fights them off as best as he can. They slowly beat him back and onto the ground and although he kills many he ends up wounded and at their mercy…

Sticho barrels into the warrior standing above his comrade’s prostrate body and fights them off for a moment. He drags Ajax to his feet and they stand back to back, together defeating many opponents who think them easy pickings. But after they withdraw Sticho is left peppered with arrows and he crumples to Ajax’s feet.

Cassandra, plunged into labour by the stress of the situation, gives birth to a son on the hilltop overlooking the bloody battle. She is overcome with guilt for taking Alexander’s birth right away from him and prays fervently to Eris, who appears to her there and then. To reverse the curse, she must sacrifice a blood relative. Fearing for her child’s safety, she entreats the Goddess to take any other relative of hers (knowing that there are none she truly cares for). Eris smiles and points at Sticho, pierced with arrows on the battlefield and she finally knows the truth of their connection.
It’s evident to all now that his wounds are fatal.

Hector struggles to get his chariot out of the battle, but it crashes into a rut and he’s vaulted over the top as the horses break themselves out and charge away. Hector is assaulted by enemy troops, but it’s evident that his army are winning and he is not taken captive or dragged away.

Alexander drives out of the battle and up to his tent. He’s sick of the chaos and confusion and only desires peace for his kingdom.

Sticho’s last words to Ajax are to take care of his wife and child. Ajax promises to care for his comrade’s family as if it were his own.
Cassandra’s grief at Sticho’s death cannot be overcome and she takes her own life after handing over her son to Ajax.
Ajax’s lower leg must be amputated, but he retired to his farm with the young son of the tragic couple’s union.
Alexander is crowned king and leads his people through many years of peace.
Hector survives, and is forgiven by his brother and remains an honoured guest in the citadel.
Played by Donogh on Thursday, July 17, 2014

Email ThisBlogThis!Share to TwitterShare to FacebookShare to Pinterest
Labels: Fiasco