Only in it for the Money

Rudiger and Fafnir sat late into the night, puffing pipeweed and sharing a wineskin of looted fire-water, whilst staring into the flames. They debated long on their next move, eventually deciding that a dead orc at your feet was worth two live ones in a ransacked Dwarven hold.

The plan was simple: travel to the last bastion of Dwarven power in the region, claim a reward for the artifacts still in their possession, and then offer themselves for hire as champions in the struggle against the orc. They set forth, on yet another lengthy and ill-provisioned journey, tramping through the wilderness. Fortunately, this time, Jonah knew where he was going.

Wending their way through the hills, their route from Ennet Bend brought the party close by to Enfield - the first of the Dwarven holds to fall. Great was the surprise when they spied the Vorloshi pennants flying above the damaged parapets. 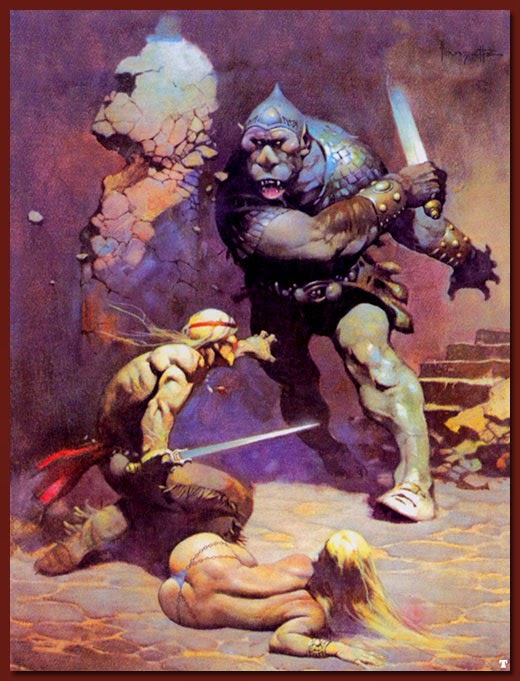 After a brief dialogue with the Vorloshi captain, Fennell, in which he offered to enlist the entire party, Rudiger charmed the man, with tales of daring and martial prowess, and they were granted audience with the Duke: a man by the name of Cowley. Striding into the great Dwarven hall, which was large enough to accommodate a large crowd of burly human soldiers, the heroes sat with Cowley, broke bread with him and enjoyed a stew of vegetables and mutton and a thin sour ale. They compared notes on the Orcish menace and Cowley revealed his intention to bring the battle to the Orc and to crush them once and for all.

Cowley made a proposal: for a sizeable sum - half before and half after - the party would travel henceforth into Orcish lands west of Ennet Bend and hunt down Jack Bloodeye, the orc chieftain.Bloodeye was known to be in either the city of Bradfeld, or in a town north west of Barrowbridge. Seizing upon the offer of violent employment against the orc with both hands, Fafnir and Rudiger took the job. Shank took the reliquary artifacts and made his own way to Crystal Falls (which, it transpired, also had a Vorloshi governor) in order to complete the first half of the original plan. The fellowship parted company, well provisioned with rope, poles and iron rations.

The first town Rudiger and Fafnir passed upon their hunt was a terrible little town by the name of Schilling. Fafnir chomped at the bit to bring fire and sword to the orcs therein, but Rudiger, more experienced in matters of war and commerce, kept them on the path. Jonah managed to find the location of an orcish camp from about a week past, but was easily able to follow the trail the army left behind - an ongoing swathe of rubbish and denigration scarring the land.

The army itself was camped at the riverbank, building a bridge to cross the river into Human territories. Their obvious target was Iron Gate, a stout fort and gateway to the plains. Swiftly skirting the Orcs, the party headed straight for Iron Gate and sought out Captain Finnegan, to warn her of the impending attack. After a hearty meal and a few draughts of ale, a plan was hatched and Rudiger and Fafnir left Iron Gate, to descend down a well, a little outside the fort.

Within a day, the Orcs arrived, scattering about outside the fort in a disarrayed, but nonetheless a scary and effective force. They attacked, surging to the walls of the fort. Many died.

Suddenly, to the sound of might horns trumpeting, the Valroshi sallied forth on horseback from the fort, driving a deep wedge through the Orc forces, causing chaos and panic, and lashing about with their weapons, leaving rivers of red in their wake.

At this unmistakable signal, the heroes clambered from their hiding place and sought out the chieftain. He was easy to spot, a huge, hulking brute adorned with mismatched armour and tribal ornaments marking his rank. The heroes wasted no time and charged directly at Bloodeye and his lieutenant. Bloodeye, huge runic sword in his claws, showed his colours: fixing Fafnir with his awful gaze, he unleashed an unholy and evil magick upon Fafnir. Fafnir screamed and clutched his head as he felt a pain as if his eye was exploding from his skull. Rudiger launched himself forward, carving deep gashes into the furious chieftain, trading blow for bloody blow. The four mighty combatants whirled in a frenzy of savagery, until finally the chieftain laid a might blow along the side of Fafnir's head, sending his great sword arcing from his hand and his limp form crashing to the ground.

Fafnir sat up and looked around. Confused, he patted himself down: he had no pain, and the world was curiously silent and drained of colour. "I must have hit my head", he muttered. Then he saw a cowled figure sat in front of an up-turned round shield, setting a chess-board atop it. Fafnir sat down, and cracked his knuckles, determined to cheat Death of his prize.

Meanwhile, Rudiger was engaged in an increasingly desperate battle, but his years of training and experience in fighting dirty won through in the end and he drove his Dwarf-made blade deep through Bloodeye's body and taking his life. His victory was short-lived, however: the many-armed lieutenant, with a screech and a vicious cut left Rudiger face-down in the mud, his lifeblood seeping into the earth.

The Orc wore a confused grimace upon its face as it dropped its sword. It looked down at the great sword retreating from a great rent in its chest and it dropped like a stone. Fafnir stood, swaying slightly above the corpse. Without hesitation, Fafnir gathered up the crumpled body of his friend, swords slung over his back, and made straight for the temples of healing in Iron Gate, determined to let no-one, Orc, man, woman or Dwarf stand in the way of his purpose. Bloody murder had been done this day, and would be done again should Rudiger not make it through.

Placing the body of his friend before the healers, Fafnir shrugged off his battle-worn armour and offered it in payment and then knelt before the dias and muttered what prayers he could to the old gods of Usterlant.
Played by Donogh on Monday, June 23, 2014