In the night attack by the elder Kobold, Taeros and Shank get separated from the others:

• She avoids the Dragon (!) and is able to discern the signs of its approach or passing and will recognise those signs in future


They both end up back at the Oasis and that evening is rejoined by Rudiger and Fafnir, who look like they’ve come through quite a fight! They hand over a share of the treasure from their escapades. 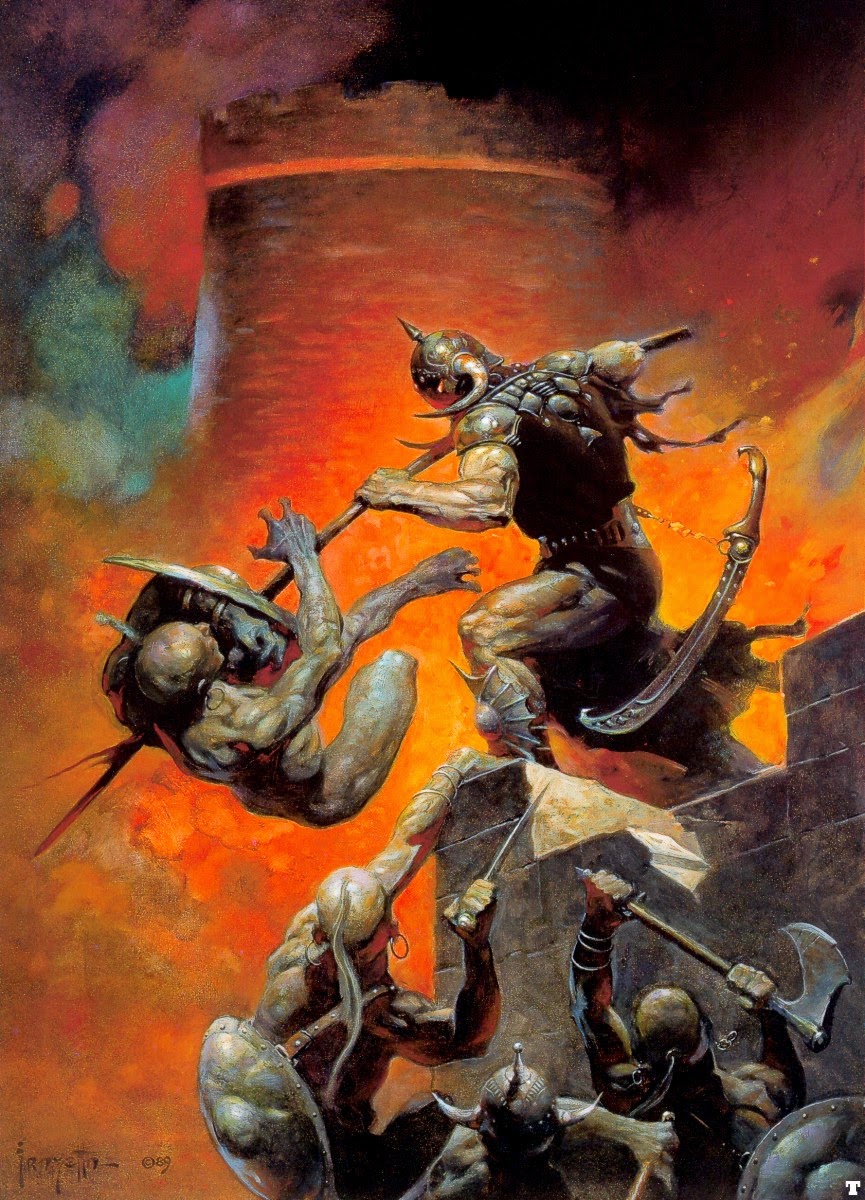 Deciding to forgo the road back to Blackstone, where they would expect to be treated roughly, they cut across the harsh desert to get on the road to Irongate, a keep on the borderlands with the Ruk Confederation. They rest and refit in the garrison town, where Captain Finnegan runs a tight ship - she finds that being on the frontline against hordes of Orcs focuses the mind wonderfully!

As the group seek rest and recovery, Fafnir the Great regales the other patrons of the inn with their tales of derring do; ordering roasted pigs and barrels of ale to be produced for all who will listen. Amongst the wild stories, they manage to pick up a few details which prompt their next adventure:
An Orc horde has raided deep into the Black Hills and has overrun several Dwarven holdfasts there. They've not held onto their gains but have moved through.

The trip to the Black Hills is uneventful - they avoid a raiding party of Orcs and their Wargs on the road up to Emmet's Bend. When they reach the Dwarven holdfast of Enfield they find utter devastation.

Several large pyres smoulder as they approach the site of a battle. The corpses of about 200 charred Orcs leaves a terrible smell; but not so terrible as to mask the rotting smell of at least 600 Dwarves who lie scattered across the plain outside the hold. They have been stripped of everything valuable and left as carrion.

Rudiger's veteran eyes tell the story of the battle. Fighting against a small force of Orcs, the Dwarves had backed away as new forces began to arrive on the field. Eventually, in danger of being overwhelmed and without any chance of making their way back to the gates, they formed a tight mass to sell their lives dearly.

This tale of an sally gone terribly wrong is overturned when the Fighter takes a closer look; they were carrying something heavy and valuable. Perhaps they were on an expedition when they were ambushed? But no - Rudiger thinks that they were running out of the holdfast in order to protect their heavy cargo...
He finds the clan leader (with his bitter experience of Dwarves, he knows them from their braided hair and tattoos) - underneath the ragged shirt is a large key; whether it's to a chest or a door whatever's inside will be very very valuable!

Many Orcs (but not all) moved northwards after the battle carrying the heavy chest, but the adventurers decide not to follow immediately and to investigate the hold first. The holdfast itself dominates the landscape; a great round tower juts out from the main walls, and above it is an equally impressive curtain wall on a bluff overlooking the rest of the fortifications. 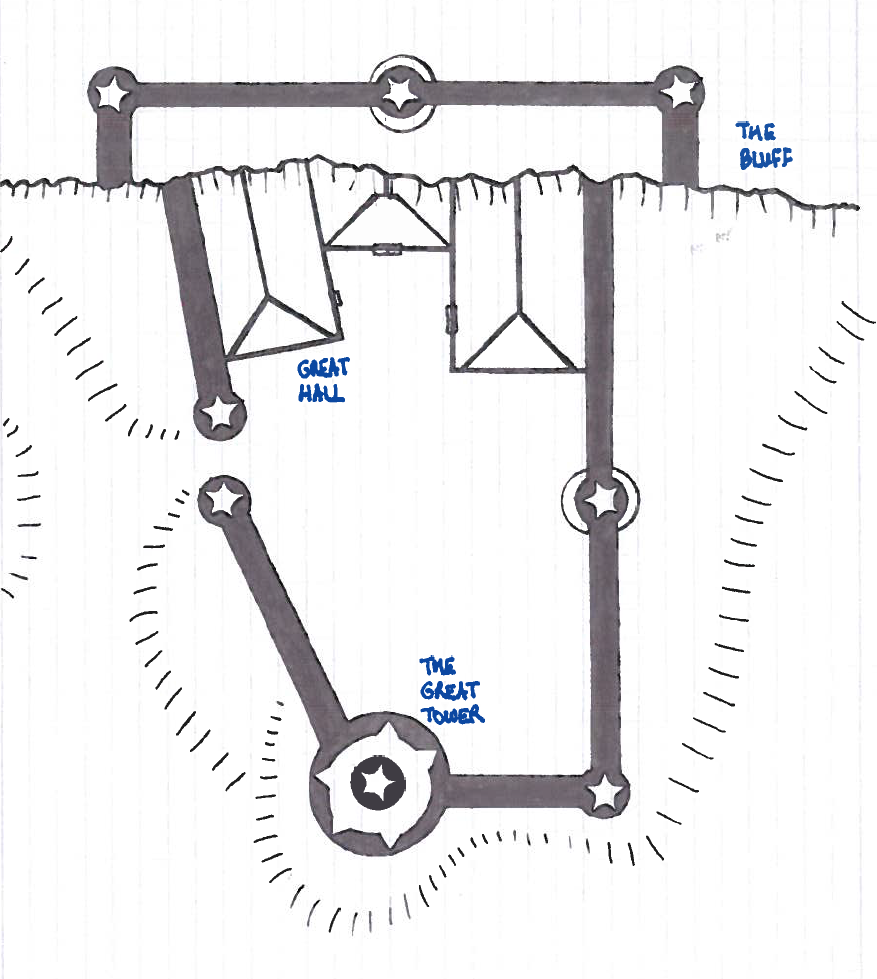 As the others enter the hold, Taeros remains behind. She knows that it would be impossible for her to inter every Dwarf in their usual catacomb burial, but starts a quick prayer to ease their path into the next world; burning sacred herbs as she walks through the carnage.

The strong oaken gates are broken and the gatehouse itself has been severely damaged by some mighty siege engine. A dozen or so dead Dwarves are littered around the courtyard. Climbing up to the top of the Great Tower, Fafnir, notices six Wargs approaching from the south - he yells at Taeros to run for the Great Hall and legs it back down the stairs.

Rudiger waits patiently at the strong door for the two, Fafnir rushes past Rudiger just as a kestrel swoops in through the door. Taeros resumes her natural form as Rudiger bars the doorway. They find a spiral staircase at the far end of the Great Hall and carefully make their way downwards.

The place is a tomb. Shattered furniture (used as barricades) is strewn throughout the corridors and doorways, with Orcish blood pooled next to Dwarvish bodies. Next to a large hall, is a door to a small platform which opens up to a stream. Taeros transforms into a salmon, and swims upstream until she spots a similar platform - even with the difficulty of taking her bearings in that form, she's sure she can find her way to the spot again. 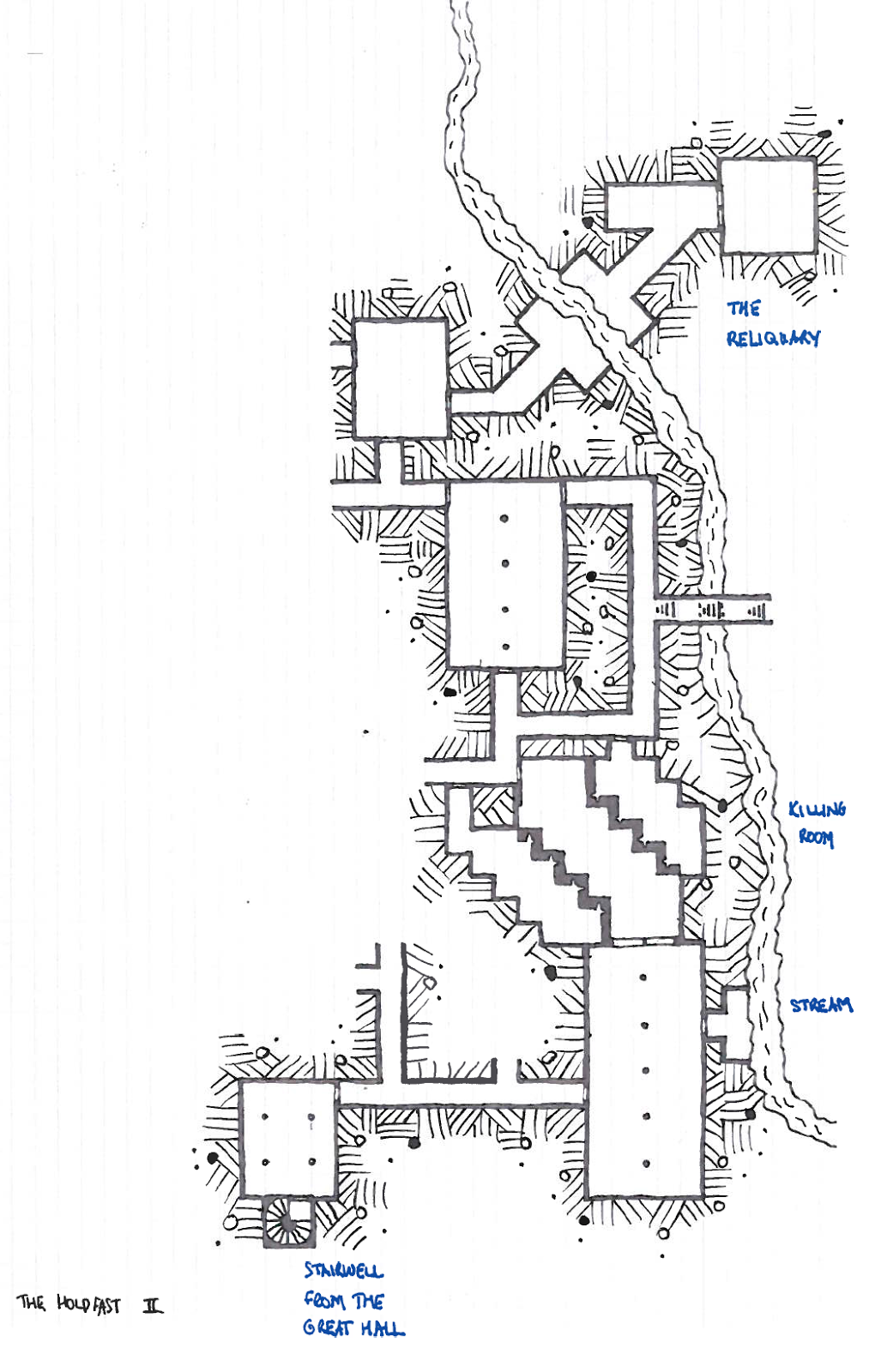 They walk through large double doors to find themselves in a killing room - arrow slits dominate the passage from both sides and the floor is matted with Orc blood. Here at least, the creatures paid a terrible price for their conquests.

Finding a long stairs upwards, they quietly make the long climb, eventually finding themselves on the high curtain wall overlooking the hold. Near the eastern tower linger five Orcs, who charge them while the party quickly assess their options. One of the Orcs draws a bow to keep their heads down as the three adventurers turn to run back down the stairs, but Taeros drops her new spear and knows that she won't have time to retrieve it before the Orcs reach them. Rudiger back her up and they stand shoulder to shoulder just in time as the four Orcs barge into them. Rudiger smashes one to the floor with his sword in short order and Taeros holds her own.

Shank yells to them from the top of the stairs that there's a couple of Orcs coming up towards them too, cutting off their preferred line of retreat. Taeros (slightly worse for wear) and Rudiger are now facing a single Orcs, whose bulging muscles and wicked-looking cleaver set him out as he charged in. But now its rage threatens to consume them both, hewing pieces off Rudiger and Taeros as she helps the fighter. As it looms above them, a third arm surges out of its leather vest and smashes Taeros' ribcage to pieces.

Shank slides in behind the Orc as it turns to finish off Rudiger, slipping his dagger in between its ribs and snuffing the life out of the berserk monster. Shank and Rudiger turn to face the winded Orcs as they reach the top of the stairs, but they make short work of them. They turn to see the archer has run for the tower beyond, and Shank chases him: they can't let him reach any help nearby.

Taeros' last breath rattles out of her broken body and there is no sign of returning life for Rudiger to rekindle.


Shank almost bumps into a Dwarf as he rushes into the tower. The short armoured figure standing above a dead Orc. The Dwarf introduces himself as Bjorn, a Cleric and sole survivor of the holdfast. As they compare accounts, Rudiger asks Bjorn to identify the key he took from the clan leader on the battlefield. Bjorn realises that it must be a key to the Reliquary below.

They make their way to the depths of the dungeon once more, finding a small room across the stream. It's been emptied out, but from the arrangement of the room, they realise that a large and heavy chest must have been given pride of place within the room.

All they find is a black iron spike, twisted like a thorn and colder and heavier than it should be. Bjorn feels empty and removed from his God as he touches it and no one has the slightest inkling what it could be nor why it might have been left behind...
Played by Donogh on Tuesday, April 29, 2014