In which the grass is discovered to be no greener upriver. 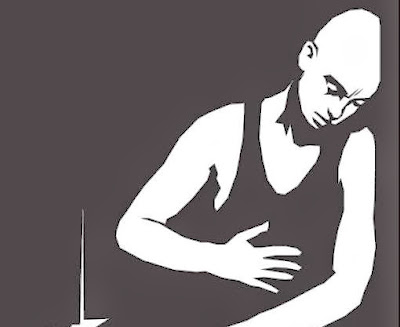 Heading upriver with hope for the future, Miss Roberta hears the usual rumours floating around about her past. She's never given anyone a straight answer on where her supply of bourbon comes from (why would she?). The usual two bring a smile to her face - that it's just regular old rotgut in nice bottles with a dose of caramel - and that she has eyes on a lost stash in The City.

They stop by a few small farmholds, just extended families with little to trade, but they do some business - no one's willing to come aboard a strange boat no ones heard of before though.

Things pick up a little as they come to Harrow's place. This one is a walled compound with 6 or 7 buildings inside and a few acres of tended trees (apples and coffee they discover) outside. They chat with Harrow, arrange some trading and a bit of repair work on their run-down machinery. When Shazza and Sweeney look for anyone at a loose end to join up Harrow nods over to a young woman at the grindstone. Barker looks like a tough nut (that she's comfortably sharpening a bowie knife does this impression no harm). She seems eager to get out of here; apparently she's Harrow's good-for-nothin' niece.

They continue until they come to what looks like a fort, high walls that they can't see behind. Armed men standing in the watchtower holler down to their boss and the reception party comes down the muddy trail to where the Rosa Lee has tied up. HD is none-too-keen on strangers, but maybe he's rattled by the convoy of armed trucks that drove by a couple of nights back. Sweeney thinks he recognises him but can't quite place him. He's brought aboard to chat with Miss Roberta and given his situation she allows him and a few of his guys to stay armed aboard, a gesture of good faith. He'll send over a few people with stuff to trade.

There's a bit of confusion on deck as Sweeney finally realises where he recognises HD from: he's one of the Revelation Heights guys. There's a brief debate on what they should do but Rothschild's sure that Miss Roberta would want safe conduct exteneded; anyway she's got that pearl-handled 9 handy. HD walks off under Miss Roberta's aegis, and some foot traffic from the hold starts up.

Rothschild goes over to Tum Tum to make sure he keeps a steady eye on these guys when Sweeney and Miss Roberta, standing on the top deck, see one of them standing next to Tum Tum just explode. A rain of blood and steel wreaks havoc near the gangplank. The others from shore who were ambling through the market draw weapons and start shooting.

From the walls of the hold across the way, more armed figures appear and begin raining fire down on the Rosa Lee. Gnarly leads the fight to clear the decks, while Miss Roberta gets the boat moving (however slowly). The crew take serious casualties, with Roark, Kettle and Leone all getting killed.

The Rosa Lee steams back towards Raven Square under cover of darkness. Miss Roberta needs a second-in-command for the boat as soon as possible. She can't trust Jess (who's on the Rosa Lee less than a month) and goes with Alan instead. He's a nice boy and everyone likes him (though few respect him).

Out with the launch, Sweeney spots a lone figure walking upriver along the left bank. That's just crazy. He gets Bar to pull over and they engage in a quick conversation about her situation. She's just walking, seeing if anyone'll take her in.
-Used to be in a place, but my friends weren't the hardholder's friends and he got me kicked out. Been scrounging ever since.
She tells a strange tale. She grew up far to the south, in Bay City. When everything went to shit there she fled north through the wastes. Even though she wasn't one of them, the cannibals left her be.
-Must've thought I was some kind of spirit
She ended up in The City, by way of Moon Creek, but ran into a crowd who gave her the heebies. Turns out they didn't like her type riling up people against their ways. Eventually settled in Lobsterville.

After they fuck by the campfire (with Bar, Shazza and Grekkor not giggling at Sweeney's antics) he realises she's that Lark.
-Fuck me

Having decided to head for home, Miss Roberta (and yes, she does mean Moon Creek) gets Sweeney to drop by The House. His crew storm the house, capturing a greasy guy who works there (called Newton) though they're disappointed there was no sign of Li. Anyway the back room of the place turns their insides. There are metal tables there, with dried blood encrusted on the edges and the floor around the legs. Large cages line the walls and on the top shelf is a half-full box of doohickeys.
Before they kill Newton, they get another name: Kirn. He's the fixer who provided people for Li and Newton.
Played by Donogh on Wednesday, July 03, 2013