Walker, a retired Lampblack and what passes for a ward-boss in Charhollow approaches the Orphans. They are invited to a sit-down in Tangletown; he won't say much more than that except to assure them that the meeting's legit. Despite this they are wary when taking a boat across to the tangled mess of old ships that makes up the only neutral and peaceful area in the city.

They're brought down to a closed room in the hulk of an old Leviathan hunter; the decor is old and mouldy. Around a table is Erin, the leader of the Billhooks; Ulf Ironborn, and a woman they don't recognise. Walker nods to everyone and says he'll be outside.

The woman introduces herself as The Star, captain of the Unseen. She wants the warring parties to come to peace tonight: this current state of affairs is no good for business. 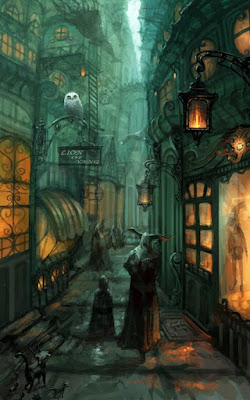 The Orphans and the Billhooks square off in the negotiations - Erin suggests that the Billhooks have more that they can unleash in the war, but have been holding it back. Monger snorts his derision - how many dead Billhooks have they dropped so far? Maybe two dozen? Erin alludes to her brother in prison - he's not so reasonable as her, but a reasonable deal will keep him out of the way.

Ghostblade is whipping up something to get inside their opposite number's head - but the ghosts here are old and fierce. One comes out of the walls and grabs her, but she resists possession and forces it to scout outside to make sure no one is planning to ambush them.

They disagree strenuously over the return of the Billhook's turf - in a war they didn't start! But the Unseen look unfavourably upon those who thwart their will, so they think on a peace deal that will satisfy everyone. After some private discussion, they return with a proposal.
They will return the hard-won turf, and the Billhooks will become worshippers of the Wicked Mother: who won't abide by the unfaithful. Erin can promise that if any of her people refuse to bend the knee, they'll answer to her.

Ulf Ironborn, almost forgotten in this to and fro' curses at them all, and storms out. He'll accept none of this so-called deal.

As they leave, The Star calls them aside. They'll be in contact soon, about another deal to help each other expand their interests further afield.

As per Lord Scurlock's friendly request, they look at the cult of the forgotten god, the Web of Pain. It's a small organisation, but one dating back to the early days of the cataclysm which broke the world. Echoes of the Emperor's trials of those times feed the God, and the adherents of the cult acquire the holy writings of those saints who have gone through these kinds of painful tests.

The cult work out of a small bookshop in the back of an arcade in Silkshore. GhostBlade realises that her cousin, Roethe Kinclaith, is a member. The foppish, if deadly, duellist acts as their guardian and merely dabbles in the cult itself.

Monger stays outside, marking Kinclaith for when troubles erupts. GhostBlade wanders around nearby, but out of sight, she'll get involved if spirits prove too troublesome for the others.

Gap and Fancy Frank go into the shop, and look around for something interesting. Fancy Frank confounds Eldridge (the helpful attendant) with an obscure and fascinating query which sends him hunting high and low and mumbling to himself. Gagan's advice was key in finding such a perfect request.

With that distraction in place, Gap makes his way to the back of the shop; there, narrow double doors lead into a small free-standing room, almost like a vault. Working quickly and quietly, the lurk tries to unlock it - but then realises that it's not locked at all, merely dead-bolted from inside.

He pries it open, but is aware that someone else must be inside this vault with him. There's a narrow passageway just inside the doors, and as soon as Gap steps away from the door he feels an intense agony like nothing he's every experienced. He pushes through the feeling - relying on his early training for ignoring distractions. He blanks his mind, remembering holding his palm over a candle, reducing the pain to something more manageable.

And then he's out in a storage room, high and vaulted. It's packed with scrolls and boxes and he sees an old lady beyond sorting through a small sheaf of papers. Knowing that his time is short in here, Gap saps her from behind and sets her body down near a desk - hopefully whoever discovers her will assume she fell and hit her head.

After locating the scroll Scurlock requires, he quietly shoving a few choice looking items into his satchel (might as well make the job pay as well!) and quickly leaves, giving Fancy Frank the signal as he passes.

A few days later, after having delivered the correct scroll to Lord Scurlock - they are approached by the Path of Echoes. Apparently that group wants some of the scrolls Gap grabbed back. They pay them off, and nurse their grudges. They don't want to pick a fight with the Path of Echoes yet...