A new crew of Shadows gathers in Crow's Foot. Their lair is in the blocked off basement underneath the district offices of the Dept. of Paving & Verges.

Curt Seldom aka 'Paving', the Spider, is an Akorosi clerk who has a back office job in the Paving and Verge Department. An underclerk, really, immune to notice. Age has crept over his youth, infiltrating his eyes and tightening his mouth. He's thin to the point of bleakness, fingers always stained with a bit of ink, so the quicks of his nails are gray.


Mara Penderyn, aka 'Shrike', the Cutter, is one of the two surviving children of the Penderyn family, Mara and her older brother Adric were adopted by a long-time friend of the family, Dr Morlan Erdrad. An occult scholar, Dr Erdrad noted the children's innate sorcerous potential, and took them under his wing as apprentices.


Ring Helles, aka 'Hammer', the Leech is a Tycherosi construction worker. His demon blood is apparent from the bone spurs growing out of her skull instead of hair. He knows Paving from work, and the Spider was keen to bring in the gifted saboteur in.

Paving is feeling some heat from Jeren, the Bluecoat archivist who has been a thorn in his side for a while now. He's hatched a plan to direct some trouble Jeren's way, whilst compiling a blackmail file on Grace, the extortionist who is Shrike's enemy. They're going to hijack a wagon of casework which is being transported from the Bluecoat station to the courthouse. 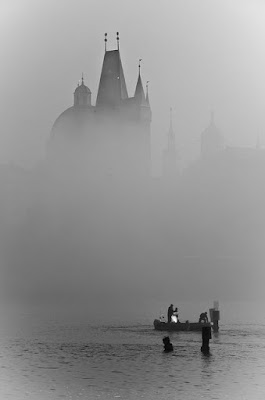 They've gotten a worn Bluecoat uniform from Laroze, their favourite friend-in-common. Hammer turns up as the wagon is loading up, and jumps up beside the driver without too much comment. Bluecoats are always hitching a ride on these trips to the courthouse. Just as they lurch into motion another person leaps up, this time finding purchase on the rear step. Hammer can't tell who it is, and the other won't know anything about this unexpected twist when they plan triggers.

Earlier that day, near the main crossing into Charterhall, they arranged an accident to occur on demand. Hammer greased the axles of a delivery wagon and tampered with the brakes. A simple push from a child would set it careening down the street. And that's exactly what it does. Shrike leans against the wagon, and it begins its roll just as the Bluecoats round the corner. It hits a sabotaged cobble, catching the wheel, causing the wagon to flip. That blocks the way across the bridge, sending cabbages flying.

Alya. the driver of the Bluecoat wagon pulls it to a halt. She looks one way, and then the other; trying to figure out what the best way to go is. Hammer points down the narrow laneway to the left, saying that it'll take them to Charterhall the quickest.
From the rear step, a confident voice rings out to countermand his direction. It's Danvers, a junior lieutenant from the station house. He reckons that the underpass at the hollow of that alleyway is too low to let them pass. He points the other way, the safe way...

From a window above them, Paving opens his lantern, signalling to Salia, his favourite broker of secrets. Salia has a connection with the canal dockers and has drummed up a demonstration for rights to match the unionised dockers who work the Leviathan Hunter fleet. A couple of dozen of chanting dockers, with signs and cudgels comes up the road, and Danvers decides discretion is the better part of valour, gesturing for Alya to take Hammer's route. She has to jump down to haul the goats away from their surprise feast of cabbages but they get moving fast enough.

The alleyway is narrow and the cobbles are grimy and slippy. As they work through the detritus of crates and pallets, Hammer offers the rest of them a cigarette, from his special box. It only has a few cigarettes inside, but with a special spring that gives him a particular one on demand. The rest are laced with Skullfire poison (which'll give anyone a blinding and debilitating headache for a while). Rosser locked in the back refuses the offer - the barristers will have his hide if he puts a flame anywhere near the dusty papers. Alya and Danvers take it and within a minute they're both out of action (Hammer makes sure Alya doesn't fall off the wagon and break her neck).

Hammer drives the wagon down to the bottom and past the underpass which forces him to duck. Rosser inside notices the body of Danvers left behind them and starts to raise a fuss. Hammer closes the viewport and ignores him. When the shouting turns quiet, and he hears a pistol being readies, he pulls out his ace. He chucks a smoke grenade in (thankfully not one that'll burn anything) and the cases cracks, thwarting Rosser's efforts to throw it out.

Rosser opens the door with his pistol in hand, though he's pretty much defenceless with the smoke in his eyes and lungs, and Shrike comes up alongside him unseen, smacking him with a nightstick (Danvers' silver inlaid one) and knocking him out cold.

They turn the wagon left and away from Charterhall and into an empty warehouse where they load up a boat (piloted by Jenna, a servant who's friendly with Paving) with all the documentation and some moderately valuable evidence which'll give them some petty cash for their trouble.

Just before they escape, Paving pays a few witnesses to mention Jeren when questioned by the Bluecoats. That'll cause the archivist some headaches and maybe a sleepless night or two!

Salia is brought in for questioning by the Bluecoats; do they suspect that he's involved in the hijacking, or are they just applying pressure on his union activities? Paving pays off a Bluecoast to let Salia out quickly enough. It's worth it to let people know that they take care of their own.

They also work on getting paid on their new haul of documents. Some small-time blackmail and extortion requires a lot of reading and they make some hard cash from that. Their bigger project requires more work, Grace's weakness will need some finesse to leverage.