As GhostBlade and Monger bargain with The Throne of Judgement, Quess the Spider and Fancy Frank the Hound assemble their trap for the inevitable response of the Billhooks to the Orphans claim on their rival gang's turf.

Fancy Frank is a bit groggy from his last fight; there were people looking for him to throw it in the 3rd, but he refused angrily. Of course he lost the fight anyway (in the 4th) and now he reckons more people than usual want to bring the pain.

Brogan, Quess' informant inside the Billhooks, has let them know that 9 or 10 gang members are coming to see what's going on; he's the Billhooks' designated scout for this punitive expedition and Quess and Fancy Frank deploy their gang of thugs to a nice (almost) cul-de-sac where they'll draw the Billhooks away from Brogan's well-scouted location. Quess is thinking of her informant's long-term future with the Billhooks and doesn't want to blow his cover.

Quess is planning to get the locals riled up against the Billhooks and use that an her opportunity to spring the trap. She knows from talking with Brogan that the leader of this cadre of Billhooks, a man called Narcus (Coran's old lieutenant) is well-known in the gang for abusing kids, so she starts to spread that rumour along the shopkeepers of Bridge Road. She's in civvies.

Fancy Frank has set up in a good sniping position above the alleyway leading to the ambush site. He's fully strapped for a real fight. 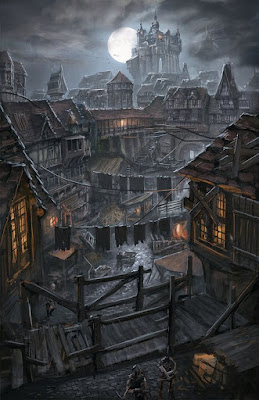 Before she can close the deal with the grocer, a shot rings out from behind her. The Billhooks have arrived early and the lead thug opened fire with his pistol. The shot clips Quess' shoulder and hits the shopkeeper square in the chest. Quess just runs, the plan is obviously not going to work with the locals as a lynchpin now, but all the other pieces are still in position (she hopes). She sprints for the alleyway and they chase after her.

Fancy Frank takes careful aim with his long rifle, making sure not to hit Brogan. He squeezes off two rounds as they make their way down the alleyway after Quess, but then he realises that he's left the rest of his rifle ammo behind - that fight must've dulled his routine more than usual, he's not quite as sharp. He jumps down and draws a pistol to give chase himself.

Quess is losing her lead, and the Billhooks behind her are gaining quickly. Brogan, smart lad that he is, runs interference for her by taking the lead and preventing the others from getting within striking distance. Quess draws a blade and wheels around, causing them all to stop suddenly in surprise. Then she takes a deep breath and standstills Brogan right when he's in front of her. She uses the confusion to make her escape and she races into the cleared store-room in the killing zone, grabbing the pistols on the chair before pointing them back at the doorway.

When the Billhooks arrive, they are cut down by the violent ambuscade that Quess' thugs set for them with Quess and Fancy Frank adding to the carnage, and only two or three are able to escape.

When they triumphantly return to their lair with the looted gear of the Billhooks and some new turf to add to their expanding territory, they find an exquisitely written letter for their attention. Even with the expensive paper and skilled calligraphy, what really grabs their attention is the Scurlock family seal.

Lord Scurlock, who is kind of friendly with them, requests that they acquire an important and arcane scroll from the cult who worship the Web of Pain. He includes some particulars to help them identify it, but expects to hear back from them soon. They could really do with the return of Gap (their 'lost' Lurk).

Fancy Frank goes down to the boxing rings, but doesn't even get a chance to put his name down on the lists. Some disgruntled punters beat seven shades out of him before his cousin (a local sergeant in the Bluecoats) saves his ass. They're the two black sheep in the extended family, so they do get along, despite their being on opposite sides of the law.

Quess goes down for that, the Bluecoats at the precinct are surprised to see her, but he jail-bird should have little trouble inside - though it's the first time someone from the Cult has made the trip across to Ironhook Prison. This'll take a lot of heat off the Orphans

Inside, the Spider intervenes against some thugs to save the life of young Oskar (before going in Lord Scurlock let her know that Oskar was secretly his great-grand nephew). Quess' usual subtle and social approach to problems backfires inside, and when she has done her time, she's paranoid. She doesn't trust in honour or social etiquette to protect her anymore.